Among the many fun and interesting things one experiences through travel, there are often some. . . potential surprises for people from the US who haven’t traveled much. No worries, though. Culture shock can sometimes be fun. 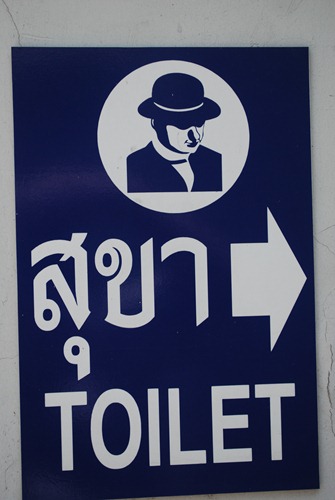 In the US, there are typically a lot of public restrooms, and they’re free to use. So your first shock might just be that if you can find a public toilet you will probably have to pay to use it. The price can range from as little as 10 cents USD to as much as almost a dollar.

Sometimes there is a different price if you’re. . . shall we say not planning on paperwork.

Which brings us to another potential surprise. In many restrooms abroad, toilet paper is not included in the fee. In some countries, you can purchase some from a machine outside the door, but quite often there will simply be none available.

So what do you do if you need paper?

If you’re in SE Asia or Muslim-dominated countries, often the toilet will have what we like to call a butt sprayer attached. You use this to clean up with when you’re done. But in most countries until I find out the paper situation, I carry some wherever I go.

Don’t expect there to be any difference in airports, malls, or on trains. Until you know for sure, bring your own supply.

Your biggest shock might be the squat toilet. This interesting setup involves you squatting down, your tush hanging in midair, while you do your duty and clean up. These are especially fun if you haven’t figured out how to use the combination of squat toilet and butt sprayer so that you don’t come out looking as if you’ve taken a shower while you were in the stall.

While some places won’t admit it, this is part of the reason people don’t eat with their left hand in some countries. I’ll let you work that one out on your own.

And if you’re a guy, don’t be surprised when you’re standing at the urinal while a woman mops the floor behind you. In Thailand, some places might have attendants who even offer you a shoulder massage while you relieve your bladder. Not something I think I’d enjoy, but apparently some do. 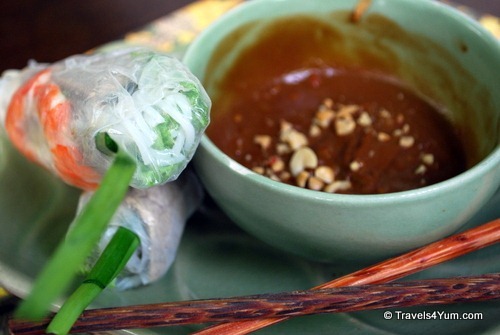 In the US, we are accustomed to being served a free glass of water, often without even asking. In most countries this does not happen, even if they have potable water. In fact, if you ask for a glass of tap water, many places will tell you they don’t offer it. (Hint, it’s easier to ask for a carafe of water.)

If you haven’t traveled internationally, you might not know there are two types of bottled water either. There is with and without gas, meaning with (like mineral water) or without carbonation. Sometimes water without gas is referred to as still or flat. So, if they ask you “still or with gas?” you know what they mean.

Ice and free refills are also rarities. Some chain restaurants, like Burger King, Chili’s, and so on, will offer free refills, but not always.

Don’t expect a bottomless cup of coffee or tea, either. For that matter, don’t expect free condiments either. Yes, there are many places that don’t automatically give you ketchup for your fries. If they prefer mayo with their taters, you still won’t get that without paying for it.

You might even have to pay extra for salad dressing if you’ve ordered a salad.

Menus are usually ala carte, so if you want any sides you’ll need to order those and pay extra. 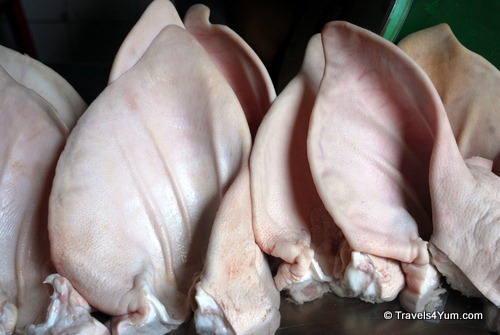 An entree is actually what we could call an appetizer. A plate or main is the main course. Soup is not usually listed as a cup or bowl, but by its metric measurement. If you aren’t familiar with metrics, it’s easiest to just remember the smaller of the two numbers on the menu is more like a cup of soup.

Restaurant service in many countries is not nearly as eager as it is in the US. You will often have to flag your server when you’re ready to order, if you want something else, and when you’re ready to pay. The idea is that food should be enjoyed and not rushed. Additionally, when you’re eating with friends, this is a time for conversation and enjoying the meal. So the server will usually leave you alone so as not to disturb you. I’ve seen some Americans complain thinking this means the server is being inattentive and/or rude, but this isn’t the case at all.

In some countries, beer is cheaper than bottled water. Enjoy this.

Tipping is mostly an American thing. It’s always a good idea to check first what the tipping culture is before you go somewhere. For instance, in France if you wish to tip, it’s usually 1-2 EUR, not a percentage of the bill. In Czech and Romania, a common tip is around 10%, but it isn’t expected in most places. In Australia and New Zealand, one doesn’t tip.

Tables may be shared by strangers. So if you are looking for a place to sit in an establishment, and you see a single person at a table meant for four, it’s totally appropriate to join them. I usually ask just in case their companion isn’t at the table. If you don’t speak the language, just use your hand to bring attention to the empty seats, and they’ll either nod or shake their head. Simple.

In most countries, a steak will probably disappoint you. Beef quality varies widely.

Food is not as easily “wasted,” as in the US. So don’t be too shocked if your soup comes with a foot or head floating in it. Your food may be staring at you when it’s served. 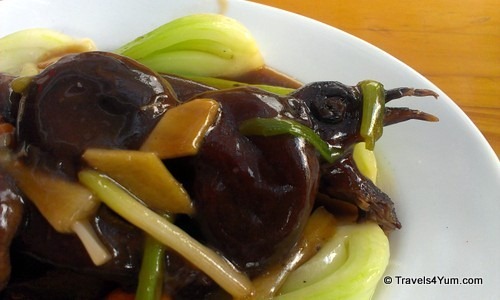 We are so used to needing a car to get around while in the US, but most countries don’t have such an affinity for vehicles (or gas is outrageously expensive) so public transportation is good and inexpensive! That’s a really nice combination.

Be aware that in some places traffic rules are more like guidelines. When driving in much of SE Asia, you have to be prepared for scooters and other things on all sides of you, including from oncoming traffic. Oh you may think you’re fine as you carefully drive in your own lane, but don’t be surprised when a scooter or truck comes whizzing at you head-on and goes past you.

Really, the same goes for sidewalks. In SE Asia, just expect that a motorcycle will be sharing the sidewalk with you at some point. It’s easier to be prepared. They’re pretty good at evading you, but it can be a bit of an extra cardiac workout for you.

And pedestrians rarely ever have the right of way outside of Europe and North America. Always pay extra attention when crossing a street, even while in a crosswalk.

Honking at people isn’t rude. It’s just part of the communication. It can mean something as innocuous as they’re about to pass you up to and including an admonishment to learn how to drive! Just go with the flow.

Have you heard how many cultures don’t share our same views of personal space? Yeah, it’s totally true. This applies to the bus as well. Just because a bus doesn’t have any empty seats doesn’t mean there isn’t enough room. In fact, in some places there’s still “plenty of room” as long as people can still put their arm through a window from the outside and hang on.

While in the US, you can almost always use your debit card to pay for stuff. Not so in many places in the world. Some cultures are still very cash oriented. Generally, big places like supermarkets, train stations, etc., will accept them, but you will generally always need to carry cash.

Thankfully, ATMs are usually plentiful in these regions.

Some countries either don’t have coins or don’t use them often, so don’t be surprised if the price you’re told doesn’t exactly match the price on the cash register. It’s often rounded for these purposes. 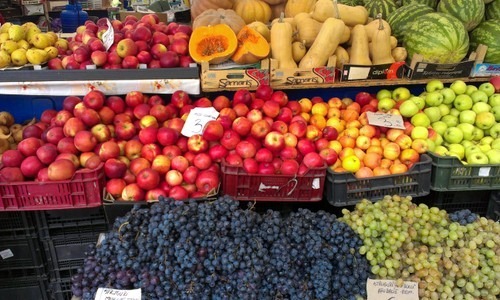 When you’re doing your grocery shopping, don’t plan on being given bags. If they have them, you will often have to pay for every bag you use. You will also likely have to bag your own groceries. Don’t expect plastic bags for your meat purchases.

It can be a good idea to bring 1-2 durable, foldable bags when you head out. Often sidewalk and local market produce vendors will provide bags for free, but don’t count on it.

Also expect to pay to use a shopping cart. This was a bit of a surprise for us in Australia, and we’ve run into it several times since. The hand carts are free, though. If you return the cart to the area where you initially retrieved it and connect the chain back to the box on the cart, you do get your money back, though. Something I didn’t know until just recently.

When buying produce (and sometimes baked goods), look out for a station where you weigh your stuff and affix a label for the cashier. In some places, they’ll have staff at the station who will do it for you. Sometimes these stations aren’t very obvious, though.

Often the label machines have pictures to make things easier, but sometimes you have to look up a code, which is seldom in English. If you’re struggling with a list and didn’t take my advice about travel apps for your phone, just ask someone for help.

Sometimes shopping is an adventure. One thing I’ve learned that might help you, as far as dairy goes, is that cream is usually sold next to the boxed milk (which usually is nowhere near the dairy aisle).

Don’t expect things to be grouped like they would be in the US. You may feel like you’re searching for a needle in a haystack. It’s just part of the fun, right?

One nice thing is that prices usually already include the tax, so it’s a lot easier to keep track of how much your purchases are going to be, unlike in the US where you have to know the local and state taxes and factor those in.

Cashiers may seem grumpy compared to the cheerful ones in the US who will try to talk your ear off while they scan your purchases . They aren’t being rude. It’s just a cultural thing. Frankly, I prefer not to be asked a bunch of meaningless questions anyway. 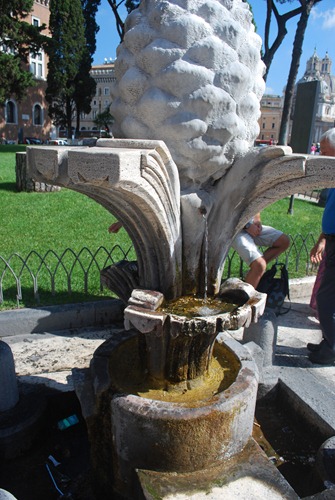 Even in countries with potable water, you will rarely ever see a drinking fountain. We’re used to finding them in airports, malls, and parks in the States, but in most countries we’ve been to they are nonexistent. Rome has been the only place we’ve visited that has a bunch of drinking fountains spread around. Romania seemed to have them in large parks, but it wasn’t always consistent. It’s usually easy to find a vendor selling drinks, though.

If you aren’t sure about drinking the water in a location, check out the site Can I Drink the Water? You can also ask a local. While that isn’t always the best bet, generally speaking I’ve found that the locals will be honest with you about the safety of drinking tap water. In fact, I’ve had more locals tell me not to drink the water when it was actually safe.

Just learn to roll with things, and the culture shock won’t affect you as much. Plus, you’ll enjoy your travels a lot more.

What has been your favorite or most memorable travel surprise?