The first time I visited New Orleans, it was a short stay and during Twelfth Night celebrations. I didn’t really have time to visit much outside the city. So, when I decided to take Tigger, I wanted to make sure we spent some time on a plantation. In doing research, it wasn’t tough to pick Whitney Plantation as our stop. 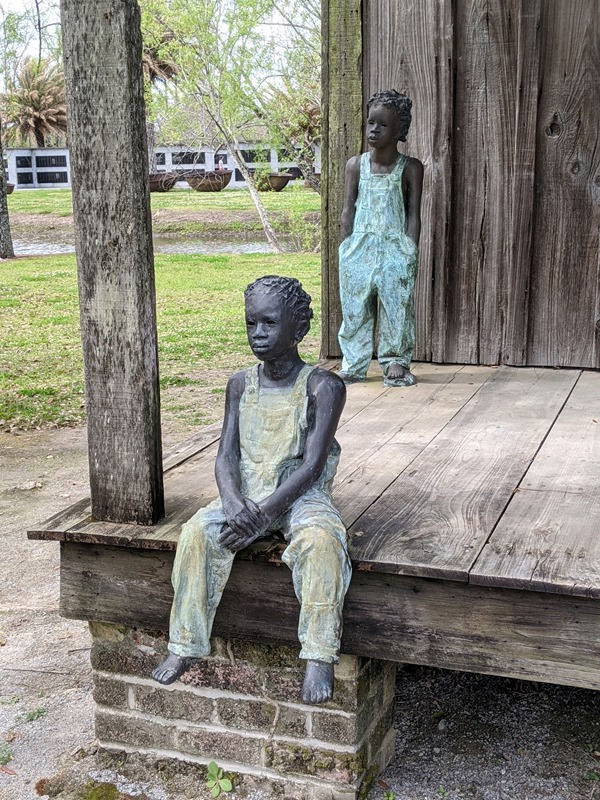 This is a very unique plantation and museum as it is the only plantation focused on slavery in Louisiana, and one of the few museums of its kind in the world. This is especially significant considering the fact that New Orleans was the capital of the trans-Atlantic slave trade.

Typically, there are guides who share the perspective of life on the plantation from the perspective of the enslaved people. Because of COVID restrictions, however, they are currently not offering that part of the experience. There is a free app (Android, Apple) which you download to your phone which provides text, video, and audio guides at the various stops.

If you forget to download it before your visit, the visitor center does have free WiFi.

Even though I had learned a lot about this time period in school, our experience at Auschwitz really showed how important it is to visit these places. Learning about this horrible time in history from books and movies is one thing.

Reading their stories while you’re standing in the same spot has quite the different impact. 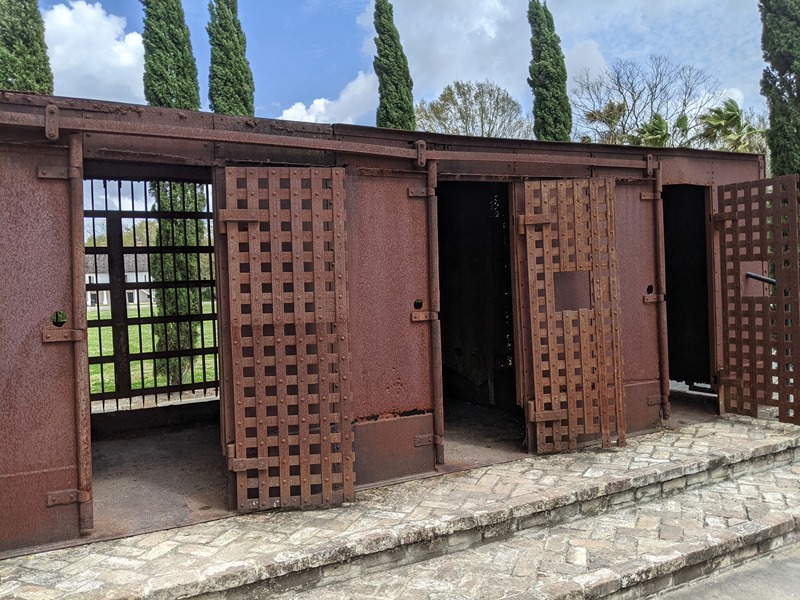 Whitney Plantation is located about an hour’s drive from New Orleans. Public transportation isn’t really an option, and while services like Uber and Lyft can get you there, returning will be quite a challenge with that service.

We went with Gray Line. The ticket covers your admission into the plantation and transportation to/from. It was air conditioned and had a very clean bathroom on the bus which was an extra plus. They leave from where the steamboat docks in the French Quarter, so it’s nice and easy.

Their website lists it as a 5-hour experience (because of possible traffic as you near the city on the return). You have about 2 hours to tour the plantation, and that was a good amount of time. 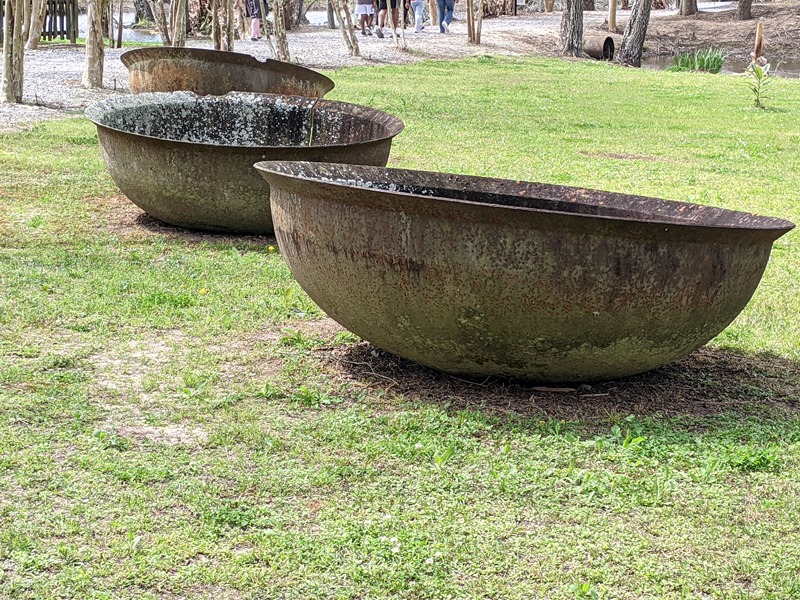 When we went, the buses were heading out at noon. This plantation does not have a cafe or restaurant, so we ate our lunch before heading out. There are picnic tables there if you wish to wait, however. They also have some light snacks available for purchase.

Definitely bring water. They had water fountains inside the visitor center so you can refill a reusable bottle. They do have cold beverages for sale as well.

Most of the paths are compact dirt and are flat. They have some misting stations spread intermittently throughout the grounds to help you cool off which was a nice touch.

If you’re sensitive to sunlight, you may want to bring an umbrella or wear a hat since you will definitely have a good amount of sun exposure. 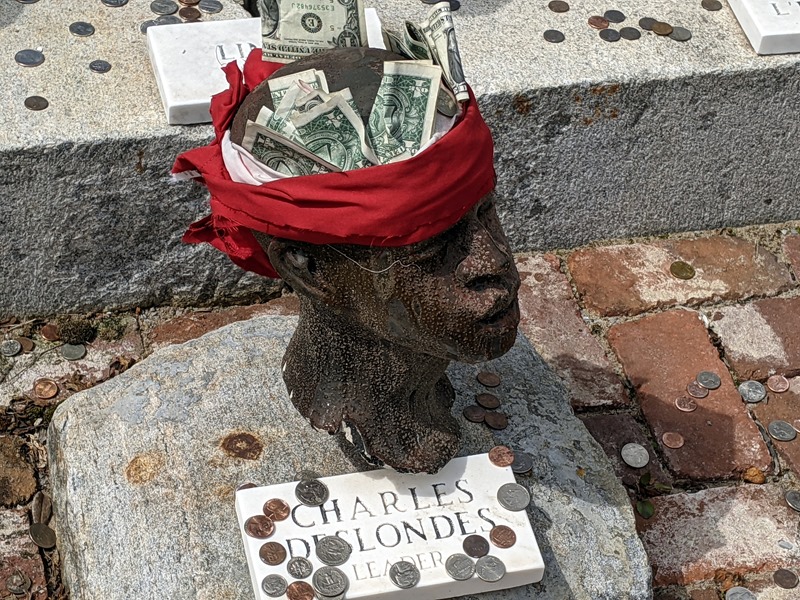 There is great signage, and the app is wonderful for teaching you about the sites.

We spent a good amount of time at the Wall of Honor. This wall contains the names of enslaved people known to have lived there. Also included are stories from those were enslaved. These first-person narratives were gathered as part of the WPA Federal Writer’s Project. Definitely take the time to walk along and around the wall to see the names and learn more about their life.

The memorial for the German Coast Uprising was also quite powerful. The slaves who took part in this “rebellion” were executed. Some of them had trials which were really only ceremonial. The juries were usually plantation owners. After their executions, their severed heads were lined along the river for 60 miles as a warning to others. 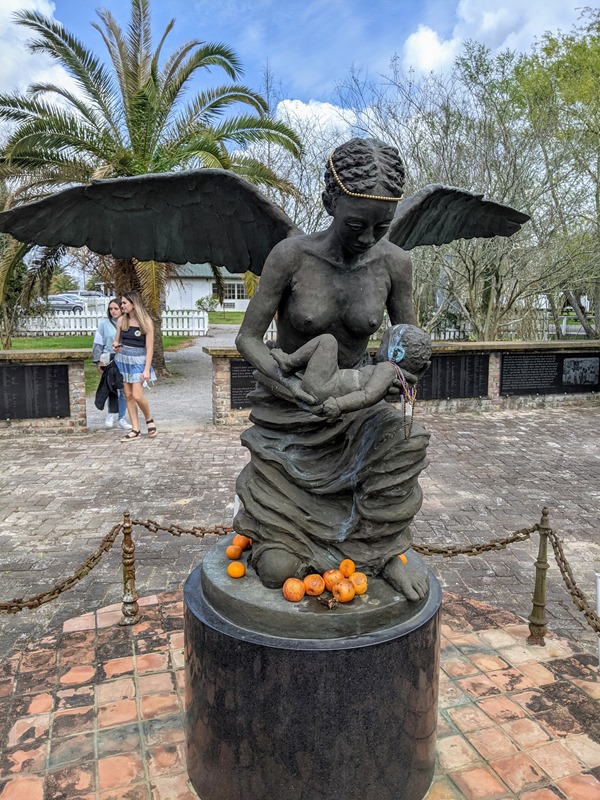 The Field of Angels is a memorial to the enslaved children who died in the St. John the Baptist parish (a county in Louisiana) between 1823 and 1863. In this time period, there were 2200 children who died in this parish. And likely that number was higher. Of those, 39 died at Whitney Plantation. Most of these children were younger than 5 years old.

Note: When visiting the German Coast Uprising and the Field of Angels memorials, they may appear differently than shown in these photos. We came shortly after a special event. Here was info I received from the museum after our visit:

“We hold an annual blessing of the grounds that is conducted by Vodun practitioners. This belief system is from the regions where Africans who were captured and sold in the Americas continued to practice in the Americas. We honor their memory using their traditions. (On the North American continent, this belief structure evolved into what many people know as Hoodoo.)

“Specific offerings—food, money, alcohol, tobacco—and the incorporation of specific colors (used to honor and acknowledge specific Oguns who are responding to the appeals of the ancestors who are communicating to them on our behalf) are used during these ceremonies.”

It is so important we visit these historical places. We must never forget!