When I was a teen, we did a road trip through Mexico. During that trip we briefly passed through the city of Puebla. I was quite intrigued to come back and explore it more. During our long-term travel, we were in other areas of Mexico that just weren’t close enough to visit Puebla. So when we recently decided to spend some time in Mexico City (CDMX)—another city I had only visited for a couple of hours—I decided we would need to spend some time in Puebla.

Since we were coming to Mexico later in the year, we decided to time our visit so we could also be there during Día de los Muertos. While CDMX has quite the Día festivities, I wanted to be in a smaller city, especially since COVID was still a consideration. So, I planned our time in Puebla to cover this as well.

Puebla is often a day trip for people visiting CDMX, and I have to say you’re really missing out if you only spend one day here. We were here for a week, and I could’ve easily stayed longer. So try to plan at least 2-3 days for your visit, especially if you’re a food lover. 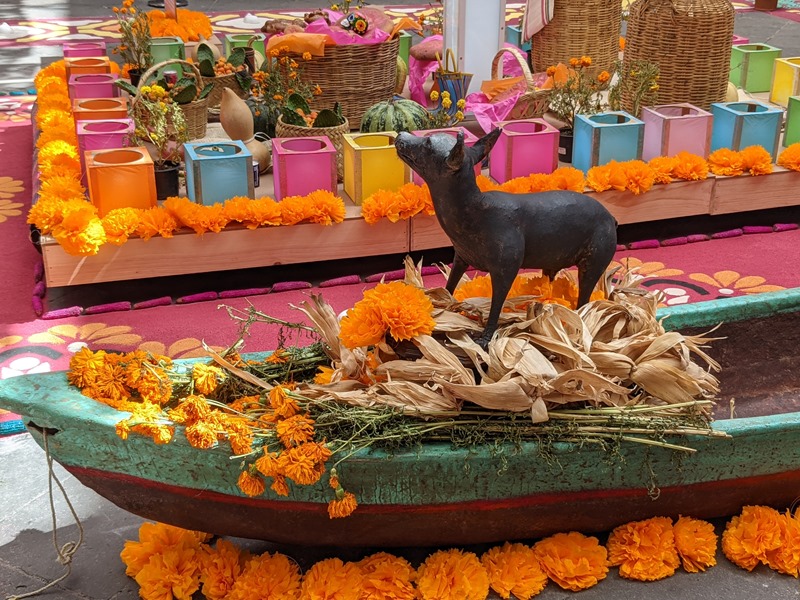 With Puebla being Mexico’s fourth largest city and only a few hours from CDMX (because of traffic) and Veracruz, one has many options for getting to the city.

As I had used the Cabify app frequently in CDMX, I decided to see if it was possible to get a driver to take us to Puebla. It isn’t always a sure thing, but we were able to get one and the price difference between that and a bus wasn’t large enough to make me shy away, especially when considering traveling to the bus station in CDMX, waiting for the bus, etc. During our trip, there was a collision on the highway, and our driver was able to use another route. We passed many buses, so I was once again happy we had taken this option.

Even though a bus is likely better ecologically, and cheaper, I do appreciate having time to speak with the driver who is a local. Part of the joys of travel is getting to learn about different people, their life, their experiences, etc. This is also one of the things I miss when traveling in a country where I don’t speak the language.

On our return to CDMX, we did go by bus as Cabify and Uber didn’t have any drivers available to do this long trip.

We stayed at an Airbnb in the historic district, and we really found the city to be quite walkable in this area. Really most of what a visitor would like to see is in this area. We only used a driver when we had to go to a pharmacy for our COVID test (it was much less expensive here than at the ones near the zócalo) to return to the US and to go to the bus station.

There are buses, taxis, and colectivos if you would like to do that instead.

Things to Do in Puebla

Puebla has a lot of culture, art, and history. It also has an incredible amount of food diversity, and many of Mexico’s most popular dishes originated here.

Obviously, if you know me at all you know I’m going to recommend a food tour. I did the Taste of Puebla tour via Eat Mexico, and I wholeheartedly recommend it! You will likely have more food than you could possibly eat, but the guide was great about making sure I could take the leftovers with me.

Definitely bring a small bag with you so you can carry your leftovers, your water, and anything you may pick up along the way more easily. You can also pay for a reusable bag when you book your tour. I did this and kept it as a souvenir.

The tour guide spoke excellent English and was a great source of info and history about the area. She’s also a foodie and was involved in selecting the locations you’ll be visiting. I don’t remember seeing another foreigner at any of the food places we stopped. You’re truly getting the local experience, and all of the food was absolutely amazing.

They suggest you don’t eat breakfast before the tour, and I absolutely agree with this recommendation. I could only eat a snack when it was time for dinner as I was still full. This isn’t a tasting tour. You get full-sized servings.

I also appreciated getting an email after the tour listing the places we visited as well as the foods we ate. 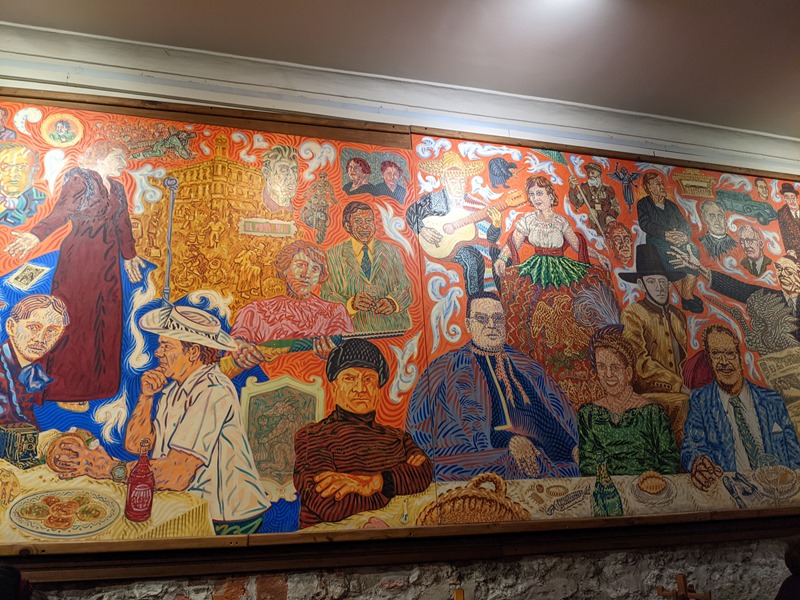 While you’re in Puebla, I’m going to strongly recommend you stop for a meal at El Mural de los Poblanos. I would say this is one of my favorite restaurants I’ve visited all over the world. The service, ambiance, and food were all five stars! Incredibly flavorful food.

Another place we really enjoyed was Maiz Criollo. Not only was their food good, but their menu had many unique offerings that you simply don’t see elsewhere.

Puebla is a city of churches. You’ll find a different one on almost every corner, and each one is very different with its own personality. There are some definite standouts, though.

The cathedral located at the zócalo is definitely worth your time. As is common with older churches, the outside can seem quite humble and the inside can amaze you. Puebla’s 16th-century cathedral is absolutely phenomenal.

Nearby you’ll also find the Iglesia de La Compañía de Jesús. While this one isn’t as ornate as some of the others in the area, it has a vibe that just really stood out for me. It had a sense of peace that I enjoyed. Right outside is a small plaza, and during my visit I could hear a celloist which just added to the whole experience.

An absolute must-see is the Templo de Santo Domingo and its Capilla del Rosario. They did charge 20 MXN (about $1 USD in 2021) to enter the capilla, and it’s absolutely worth it! I would’ve been fine if they had charged even more. It was just stunning! Once in Puebla, you will want to double check their hours as they had limited times they were allowing visitors. Also with COVID precautions, you will likely have to wait in a line by the gate. Again, it’s totally worth it. 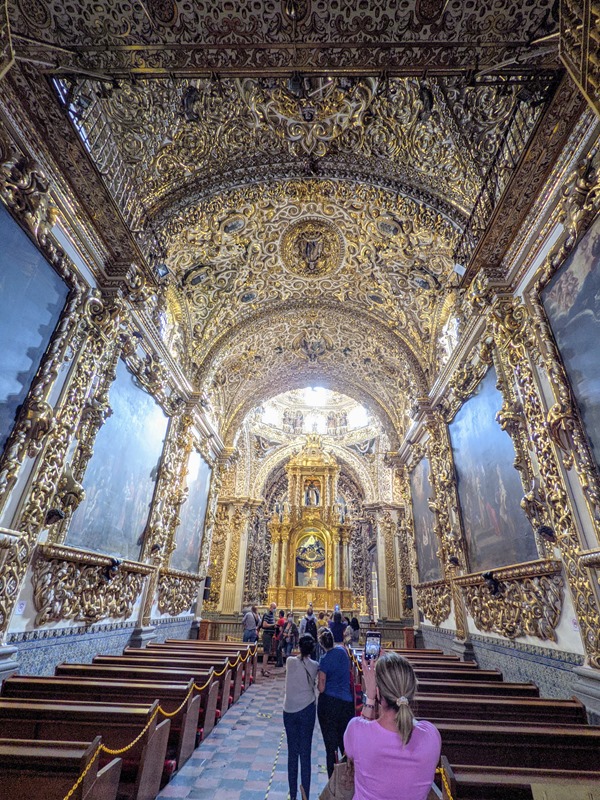 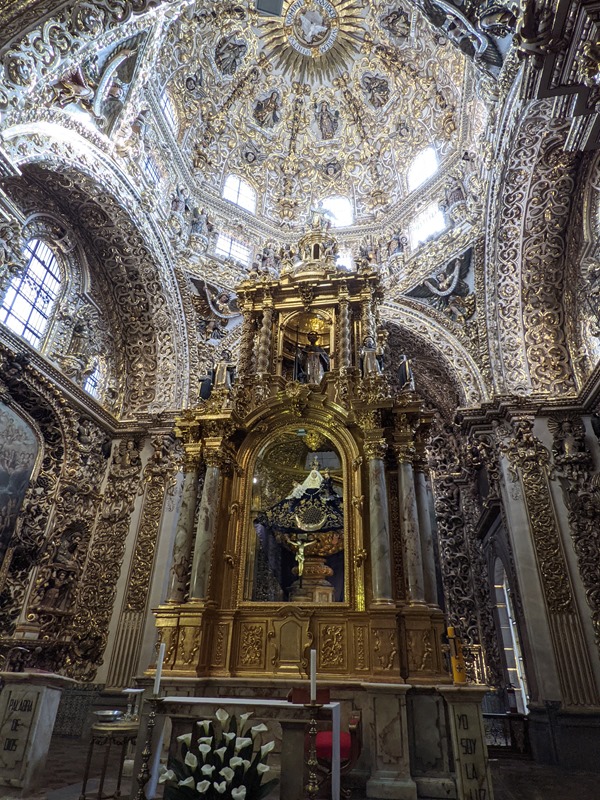 If you enjoy art and antiques, you’ll want to visit Callejón de los Sapos (Alley of the Toads) and the Barrio del Artista. These are both historic parts of the city. The callejón was an area near the river that used to run through the city, and people often had to deal with toads in their homes and buildings, so the area was known as “the toads.” Nowadays it’s full of shops and lots of color and life.

Near the zócalo, you’ll also want to visit the Biblioteca Palafoxiana. This library was founded in 1646 and is recognized by UNESCO as being the first and oldest public library in the Americas, and it is quite the sight! 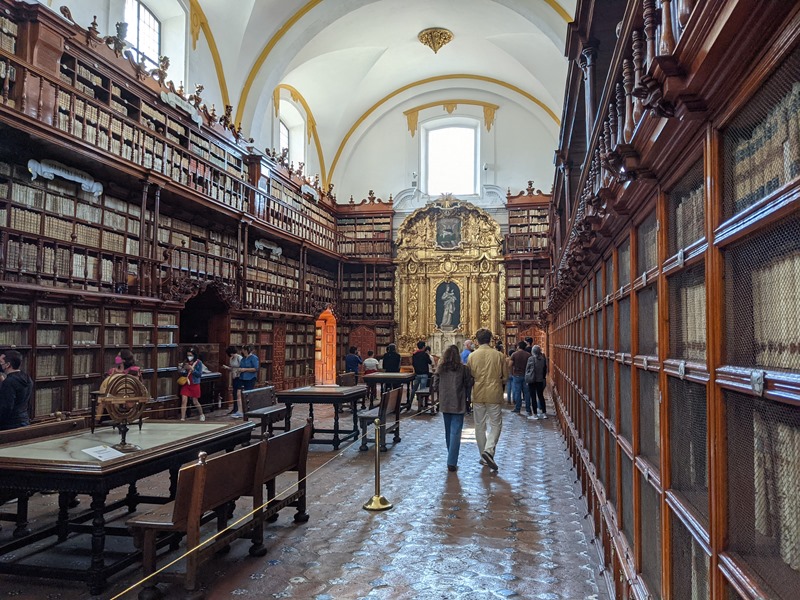 Another great spot to see and absorb local culture is the Mercado de la Acocota. If you do the food tour I mentioned above, one of your stops will be here.

While out and about, make sure to look up and on the sides of buildings as there are a lot of impressive street art and murals. 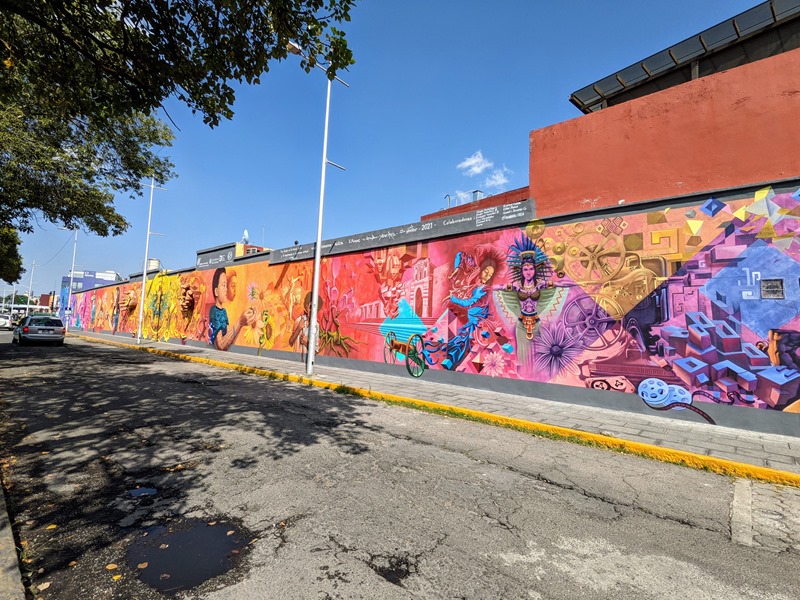 Incidentally, if you get hit with Montezuma’s revenge, a pharmacist recommended a med called Nineka. It was like magic and worked beginning with the first dose. I rarely ever have this problem, but it’s now part of my travel kit because it was so darn effective. I only wish I had asked about this earlier!

If your next destination requires a negative COVID test, we found Farmacias del Ahorro to be great! They were inexpensive, fast, and thorough.