Since we’ve finally left the country, I figured I’d put together my Morocco travel tips for folks.  Morocco is truly an amazing place (but not for food), and I really believe that it should be on everyone’s must-see list.  Out of the 12 countries we’ve been to as a family, Morocco is way up on the list of my favorite places.  Tigger doesn’t share my fondness for Morocco, but I can appreciate that as spending 2 months on an oasis was pretty darn boring for a kid. 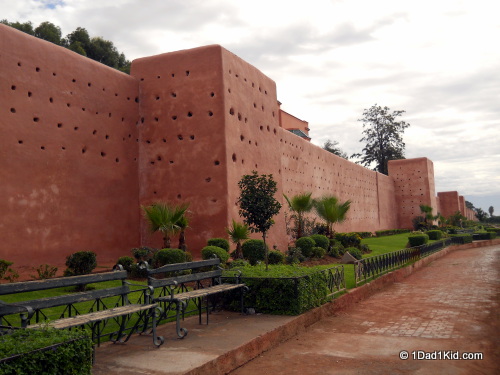 The local currency is called the dirham.  Within Morocco it is abbreviated as dh or Dh; however, the currency exchange code is MAD.  Because the euro is at a nice 1:10 conversion with the dirham (50 dh = 5 euros), it is widely accepted. There are plenty of ATMs, and most don’t charge a fee (although your bank may charge you), even in small cities.  Almost all of the ATMs will ask you to remove your card before it dispenses your money, which helps prevent you from accidentally leaving your card behind.  In addition, almost every single ATM we used had an option for English instructions, so if you don’t speak French it isn’t a big deal.

The official languages are Moroccan Arabic and Berber; however, most Moroccans also speak French, and all official documents (for tourism purposes) are in both Arabic and French.  In the far north of the country, and in a few areas of the south, many people will also speak Spanish. In the larger cities, it’s easier to find people who speak English, but you’ll have a much more enjoyable time if you learn at least some basics in French.

SIM cards are extremely cheap (20 MAD) and so are buying minutes.

For making international calls, you want to buy a telecarte. You can make calls for super cheap at any pay phone or orange public phone using this card. I believe they also work via landlines (but not cell phones I’m told).

WiFi is not very common outside of big cities, and even then it can be touch. For between 200 and 250 MAD, you can buy a USB 3G modem at any phone shop or Maroc Telecom office (I wouldn’t bother with the other companies, go with this one for Internet and cell phone). It usually comes with 1 month’s service included in the price. After that it’s 50 MAD a week for unlimited 3G service. You can buy as much time as you want at one time. Make sure to request recharge express to buy more Internet time. You’ll need the phone number of the SIM in order to recharge the service.  The phone number is located on the plastic card that came with the modem, so make sure you save that. If you’ve lost it, you have to go into a Maroc Telecom office to retrieve the card’s phone number.

Getting around Morocco is quite easy.  In the northern region, there is a train system that is fairly decent.  To go south, there are many different bus companies. Supratours and CTM are the largest, and Supratours is owned by the rail company so it is an easy way to schedule travel.  We’ve traveled with 3 different bus companies.  I’d have to say Supratours is my favorite of the three.  None of them, however, have bathrooms on board.  So keep that in mind when planning bus travel.

You can also travel by air within Morocco, but it’s quite expensive (one way for one person from Tangier to Agadir was significantly more expensive than our one-way ticket from Agadir to France for two people).

For shorter distances (3-4 hours), there are also often shared taxis.  By using these you will get to your destination faster, but you will sacrifice comfort.  From Guelmim to Agadir, the shared taxi is 70 MAD per person ($8.34 USD). However, there will be 4 people in the back seat and 2 (plus the driver) in the front seat.  If you are bigger than child-sized, it may be an uncomfortable ride. You can solve this by paying for more spaces.  However, a bus ride with one of the smaller companies is only 50 MAD.  The only other advantage the shared taxis have over buses is that they go throughout the day (as soon as they have 6 spots paid for) whereas the bus may only have 2-3 scheduled trips.

Taxis within cities usually have set fares, and no one uses a meter.  Make sure to check with a local to find out what the taxi should charge you.  In Guelmim, petit taxis are 6 MAD for anywhere in town (though the fare doubles on Saturday for the camel souk), but in Agadir the average fare is around 20 MAD for most distances, but more expensive from the tourist zone and for travel to/from the big bus station and airport.

Generally speaking, red petit taxis are cheaper than beige ones for at least 4 of the cities we’ve been to in Morocco. 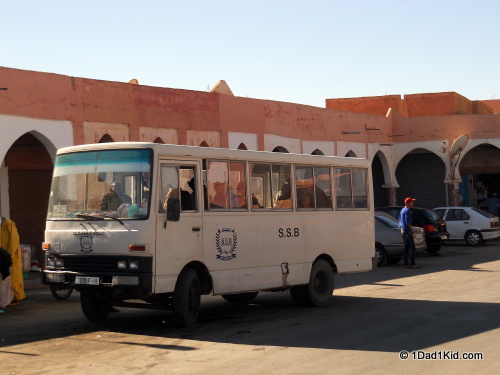 Prepare to be underwhelmed. Apparently, Moroccans use more spices at home than in restaurants, so the food you’ll be eating will generally be fairly bland and not very diverse.  It is a challenge to find any type of ethnic food outside of the large cities such as Tangier.

It is not uncommon to eat with your hands.  Just try not to bring your left hand to your mouth.  It isn’t a major deal, since you’re a foreigner, though.  Usually the left hand only holds bread.  When eating something like eggs, you take a piece of bread and use that to scoop up your eggs.

In the tourist restaurants, when you ask for tea it will already have sugar added. However, in more local eateries you will probably be given chunks of sugar with 2 glasses.  Add the sugar to the pot.  Then pour tea into the glass, and pour that back into the pot.  Repeat this process several times to mix the sugar (and mint if was added later).  Locals hold the pot high when pouring to add air into the brew which enhances the flavor.  If you aren’t feeling brave, don’t worry about “playing local” when pouring your tea.  It is fun, though, once you get the hang of it.

Moroccans are extremely friendly and hospitable. They are some of the nicest people I’ve ever met.  They have no concept of personal space, so buses can be quite crowded as you all squish in.  When speaking with you, they will often touch your shoulder or arm.

They are rarely ever in a rush and will sit contentedly for hours without asking why the bus hasn’t left or arrived.  Their impatience mostly only shows up when they drive, and they love honking that horn!

Clothes tend to be quite modest. Many women choose to cover themselves completely except for their face.  Women traveling in Morocco should dress modestly.  The general attitude toward women is quite respectful; however, I have heard from several seasoned female travelers that Fes was absolutely horrible when it comes to derogatory speech, disrespect, and downright sexual harassment (including groping).

Women generally prefer to sit only with other women, but it doesn’t break a cultural moré if a man sits next to a woman.  Generally, the gender-mixing taboos don’t exist for children.  Often on a crowded bus, a woman would pull Tigger onto her lap so he didn’t have to stand, for instance.

The call to prayer is sung several times a day, beginning at around 5:45 AM.  When selecting lodging, you may want to visually check for the closest minaret, unless you’re an early morning person.  In Essaouira, we were next to a mosque, and it was incredibly loud during the call.

Touts are ubiquitous in the larger cities. They can be quite. . . persistent.  Usually responding with la shukran will stop them from bugging you, although women will probably be hassled more.  If that doesn’t stop them, just ignore them and keep walking. Once again, they are more aggressive in Fes, and may even grab onto you.

There are multiple options from low budget to large, beautiful 5-star hotels charging more than a thousand dollars a night.  The eco-lodges tend to offer a more down-to-earth type of lodging with a more cultural experience.  Riads are large homes that have been turned into inns, basically.

It is also fairly easy to arrange treks into the desert, especially in the south, where you can experience a lifestyle more typical of the nomadic Berbers.

If you would like to experience the nontouristy, more rural side of Moroccan life, I would highly recommend staying in the Tighmert oasis (where we lived for 2 months).  It is located just outside Gulemim, which is called the Gateway to the Sahara.  We became friends with a French woman who owns an eco-lodge on the oasis, and I would highly recommend her place.

If you are looking for the all-inclusive route, we stayed in one in Agadir that was quite enjoyable.  It is seaside, has multingual staff, had great facilities (including an indoor salt water pool), and the food was fairly good.  We booked it through Orbitz for about $90 a night for 2 people near Christmastime.

Staying in a city’s medina (the old, walled part of the city) will give you an interesting experience, even though you’ll be in a more touristy area.  As always, staying in an apartment or flat is even better since you’ll get more of a feel for what life is like and a better insight into the culture of a place.

Morocco has a long coastline.  Two of the more popular beach locations are Agadir and Essaouira.  If you want a more rural experience, I would recommend Sidi Ifni.  We thoroughly enjoyed Essaouria, though, and it’s a place I would’ve been happy to stay at longer.

Agadir’s beaches have a very strong smell from the ocean, and I didn’t find them to be as relaxing as Essaouira. Plus, there are more touts that troll the beach areas in Agadir.

This is obviously only my opinion, but for me the best places to visit in Morocco are: Marrakech (2-3 days), Chefchaouen, Essaouira, and Guelmim/Tighmert (2-3 days).