We were pleasantly surprised and impressed by the all the food we ate in Edinburgh on a recent trip. Even in the heavily touristed Old Town we easily found places that emphasized local and fresh ingredients. And my daughter—a fussier eater than I would prefer—had no problem finding foods she really liked.

This is a by-no-means comprehensive guide to eating in this Scottish capital, but it’s a round-up of things we thought the locals did extremely well and that we think are worth trying are your next visit.

Yes, it’s cliché, but it’s also all over the place. It’s not as exotic or strange as you would think—it’s similar to Irish black pudding—and it’s worth trying once.

Most pubs serve an entree of “haggis, nips and tatties” (turnips and potatoes), but it’s possible to find smaller portions for trying. At Rosehip, on Rose St. in New Town, we ordered an appetizer that came out with potato, turnip and haggis layered like a savory trifle.

At The Ox gastropub further into New Town we ordered haggis balls, which were surprisingly light and crunchy and good! I could have eaten a half dozen.

My daughter’s opinion: She’s quite the carnivore but I couldn’t get my 8-year-old near the haggis, even covered in a crispy fried coating, which is usually alluring to her no matter what’s inside. 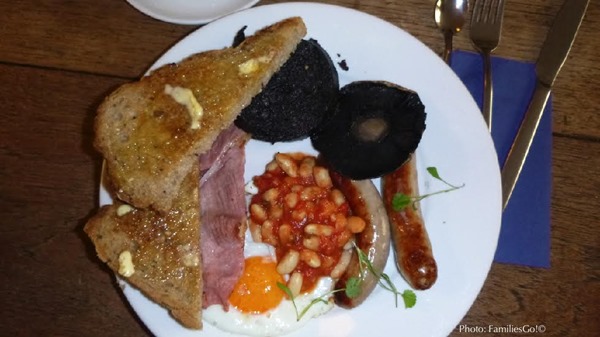 One of the joys of traveling in the U.K. or Ireland for me is the prospect of sitting down to a full breakfast: A plate of fried eggs, bacons, sausage, beans, maybe a fried tomato, brown bread and a pot of good tea is an ideal start to any cold gray day.

We tried the full breakfast at Edinburgh Larder, near Canon Gate in the Old Town. They source as much as they can locally and cook everything fresh. House-made white beans and tomatoes replaced the typical canned variety. The eggs had nice orange-yellow yolks, and the fresh, warm brown bread rounded things out. We didn’t need to eat again until dinner.

Take note that the place is small and a line can form, so it’s best to get there early.

My daughter’s opinion: It would have taken her three days to work her way through a full breakfast, but she liked the Edinburgh bacon and ate a plate of it here and on other mornings as well. 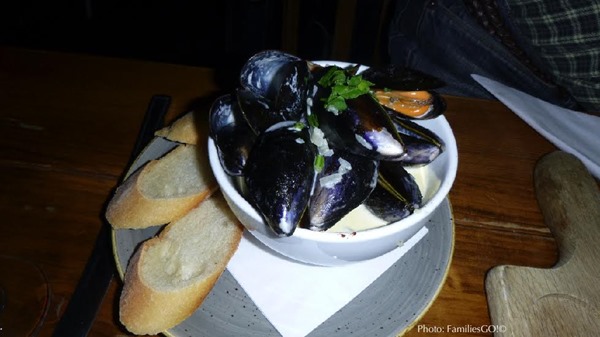 Sure, you think of Scotland, you think of smoked salmon, but the country is surrounded by water on three sides and has plenty of other seafood as well.

We had mussels twice —once at the Ox and again at the popular Mussel Inn on Rose St. Each time they were inexpensive, small, mild and just better than any I’ve had in the States. My daughter ate boiled shrimp for dinner at the Mussel Inn. They were small, came with the shells on, and also seemed like they had probably been swimming not too long before landing on her plate.

Of course, we all had fish & chips at least once (my daughter had it three times in a four-day trip). The local style is not too heavily battered. And I have to say the chips were better than any I’ve had in England or Ireland, They were light and crisp and it was quite easy to eat a lot of them.

Our hotel bartender swore to us that the best chipper in Edinburgh is the Tail End in a quiet neighborhood near the Waters of Leith. We believed him but never got there. We’re saving that recommendation for a next visit.

My daughter’s opinion: Clearly the fish & chips were a hit. She also loved the shrimp after we peeled them all for her.

When you are in Edinburgh, anytime there is something on the menu that comes in gravy, order it. They have a knack for turning their homey sauces into magical elixirs. In Rosehip I had chicken pie with a shallot and wine sauce that was rich and warming. At a popular New Town place called the Two Dogs, my husband had an oxtail stew in a broth that was equally good. I think he had to resist picking up his bowl and drinking it.

My daughter’s opinion: She was too busy with her fish & chips to care about our gravy. Her loss. 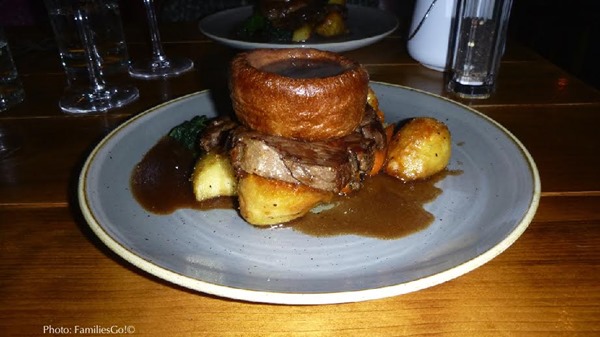 Instead of eating brunch on Sunday, Edinburgh residents head to their local pubs for Sunday roast. This means plates of roast lamb or pork with fresh veggies, Yorkshire pudding, roast potatoes and more gravy! We ate at the Ox, where they also offer a vegetarian Sunday roast plate. If you can’t get a reservation there (we barely got in without one), plenty of other pubs are known to do it as well. A quick Google search will turn up reliable options.

If you don’t mind letting your kids sample the local junk food and want to give them a thrill, buy them a bottle of Irn Bru, a bright orange soda local kids have been drinking since 1901. It’s vaguely orange-flavored but like Coca Cola (which it outsells in Scotland) it tastes like its own thing.

My daughter’s opinion: Irn Bru was a hit. Luckily we can only get it there.