If you type Scotland and beaches into something like Pinterest, you’ll most likely see the most amazing, pristine and bright white beaches. They look like something that wouldn’t look out of place in the Caribbean or on a tropical island. Despite spending the first 18 years of my life living in Scotland, I’d never set eyes on such a beautiful sight, so once I’d seen that they existed, I set about engineering a way that we could visit them.

Scotland has a lot of coastline so you’d be forgiven for thinking that they would be really easy to find. Unfortunately, they aren’t a short bus journey away from the capital or even somewhere that is easy to get to on public transport at all. The picture perfect ones are almost all on the west coast and some are even on the outermost islands. 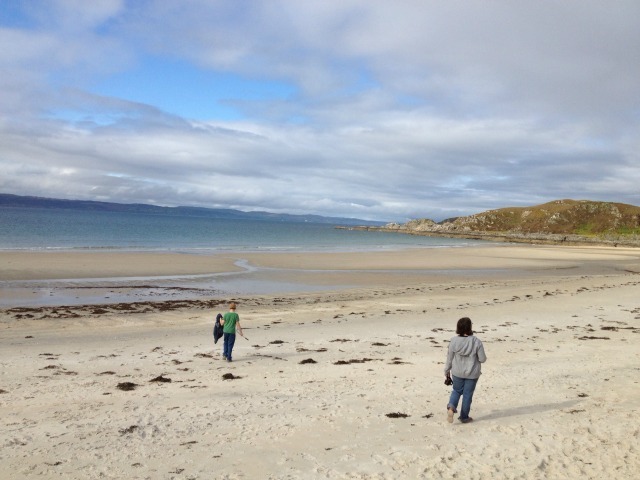 I tend to err on the side of the easiest option, especially since we travel with kids, so when I found out about Camusdarach Beach that’s near Mallaig on the west coast we decided that was the one. It was on the mainland so no ferries required, but it was quite a drive away! It’s about 150 miles away from Glasgow and 180 miles from Edinburgh – each over 4 hours away. The nearest large town was Fort William and it’s about an hour drive from there, too.

Fort William is at the foot of Ben Nevis—the highest mountain in the UK—and gets lots of tourists throughout the year so in that sense it’s quite well set up to get to these beaches. A train does go to Mallaig (and also goes over the famous viaduct from the Harry Potter films) so it’s possible to get there via public transport, but car is definitely best. 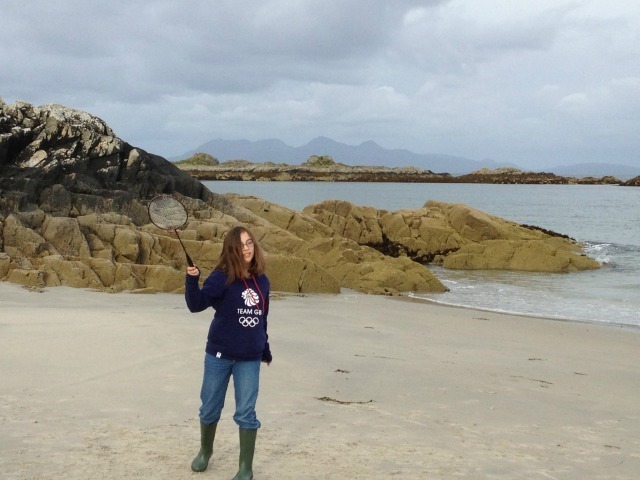 We chose Camusdarach because it was actually also featured in an old film: Local Hero. If you want a sneak peak of it then watch that film. It definitely got me fired up for the journey! There’s a campsite that leads on to the beach and we chose to stay there.

We love camping for a few reasons but the main one, especially when it comes to Scotland, is that you’re right next to the beach so you can enjoy it that split second that the weather is on your side! I have to admit, the weather can be changeable, but it’s still worth it. Camping with our kids is also a good and cheap way to visit the area which can be filled with many guest houses and hotels that can shoot up in price when you add kids in to the equation.

So, after around 8 hours of driving, another hour at least of putting up the tent and I was ready to see the beach. Ready to see if this place would live up to our expectations. Would the sand be bright white like the pictures? Would the sea be translucent turquoise blue? Or would it look dull and grey like many of the UK beaches end up looking like?

We walked about 5 minutes over some sand dunes and past a small golf course that was nearby and we were there. The beach. It looked a little dull and grey. I had to admit I was a bit disappointed, but then, as if by magic the clouds that were in the sky parted and the sun shone over the sea. It sounds so cliche, and I guess in a way it was, but we’ll never forget that moment. It transformed the sea in to a bright blue which made the sands seem whiter.

We ran down towards the edge of the sea as it lapped against the sand. I even had a little paddle – brrr! It was most definitely not the Caribbean! The views were spectacular though. Not content with being on one of the most beautiful beaches in Scotland, we also got amazing views over to the Isle of Rum, a jagged island that looks so majestic, and also to the Isle of Eigg, a completely different island that looks flat. It’s such a weird juxtaposition of scenery—the rugged landscape that is so indicative of Scotland and the pristine white beach that seems so out of place. 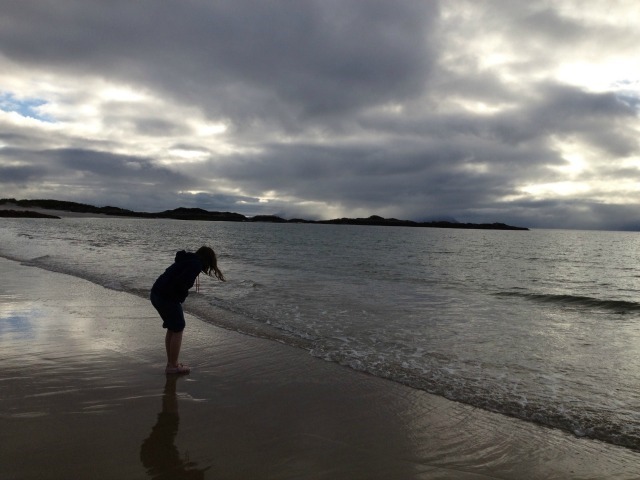 There’s more than just this beach that is worth finding in the area. Take a small detour off the main road, follow the coast round and you’ll see so many different coves and small areas that are perfect for a picnic, photo opportunities and, possibly most importantly for me, for kids to let off steam. One thing I would warn against in the area though is the midge. If you’re headed to western Scotland you’ll definitely have heard of them. They are small biting insects that are all around that area. Stock up on insect repellent!

Beaches are our favourite thing and we almost always search them out when we go travelling. I was so glad we took the long drive to find these white ones in Scotland and next time we’ll try and push ourselves to go further and find the beaches on Harris which I’ve heard are just as beautiful.

—Kirsty loves to travel with her kids and camping is definitely her preferred method of seeing the great outdoors with them. You can see her tips for camping with kids here: http://getkidsoutside.co.uk/tips-for-camping-with-kids-toddlers/