The Other Side of Vietnamese Food

Home » Food » The Other Side of Vietnamese Food

There are parts of Vietnamese food that are famous, or perhaps infamous, but there is a whole different side to this delicious food culture.

Generally speaking, Vietnamese food sustains a balance between sweet and salty. I like to believe this equilibrium represents the reality of life, recognizing that daily existence contains both of these elements. Or, perhaps it is related to a type of yin and yang as Vietnamese culture has been heavily influenced by the Chinese over the centuries.

Another common thread is the use of fresh vegetables. In the States, I pretty much avoided vegetables. Most of the time they had been canned or frozen, and they just had flavors and textures that didn’t work for me. However, in Asia I have been eating more vegetables than any other time in my whole life! They have such great flavor, and since they are fresh their texture is so much more palatable as well.

Vegetables are not only fresh, but often dishes will contain raw veggies. In the south, when you’re given a bowl of pho, it is accompanied by a large supply of leafy vegetables and herbs. The person who is about to devour their bowl of yumminess adds these into their soup right before eating, and the greens retain their crispness and flavors.

Where Thai food tends to homogenize flavors, Vietnamese cuisine is all about the individuality of flavors and textures.

“Parts” are not wasted either. In Vietnam, pretty much the whole animal is consumed. A trip to a wet market can be quite fascinating. Unless you have a weak stomach.

You will find everything from live frogs, fish, and crabs to brains, intestines, pigs ears, and even piles of cooked, shredded pig skin. 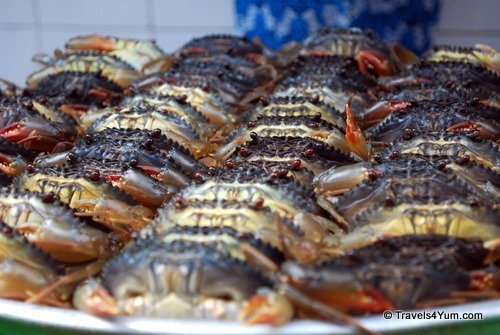 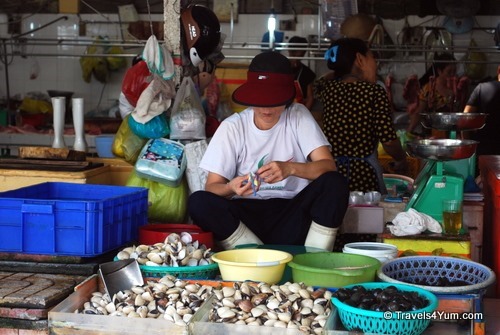 The north is not an ideal agricultural area. Most of their produce is shipped from the central and south areas of the country. Because of this, northern dishes tend to contain less vegetables.

The central and southern areas are much better suited for growing food. During what is referred to locally as “the American war,” the US had an active deforestation program to counter guerilla attacks and ambushes, among other things. Decades later, these areas have mostly rebounded, and the food from these regions celebrates this abundance. A south Vietnam dinner would not be complete without the presence of vegetable dishes.

Saigon (officially renamed Ho Chi Minh City after the Fall, but still referred to by most people, and even signage, by its former name) in particular offers much more diversity in food. The local markets in Saigon easily rival any market I’ve seen in the world so far.

Even if you don’t plan on shopping, the locals’ market is worth the experience.

Many Asian cultures share this concept, and Vietnamese food definitely is no exception. Chinese medicine has a concept of foods having hot and cold energies. The body has these as well. Foods are eaten in such a way as to balance out the body’s energies, thereby maximizing health.

It’s the best-tasting medicine you’ll probably ever have.

Even in its simplicity, Vietnamese food doesn’t require a lot to appear delicious. Lacking Western sensitivities to food and a belief in using the entire animal, food prepared in Vietnam does not try to hide what you’re eating. If you order pigeon, it won’t be nicely chopped up so that you have no visible evidence to remind you of the little birdie you’re eating.

Remember that whole “waste not” philosophy? Well, some things are considered edible that might surprise you. Once again, they aren’t going to hide you’re eating something that many might consider unusual. 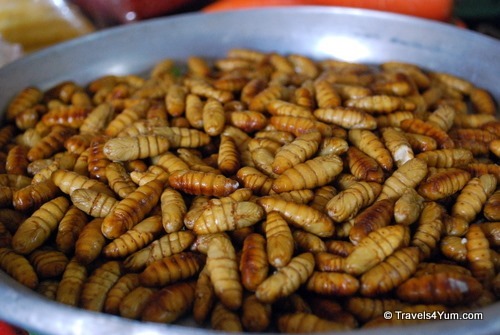 Isn’t there anything “normal” besides pho?

Oh yes! And plenty of it. But sometimes the unusual is just too tasty to ignore. Although, you won’t find me snacking on deep-fried silkworms either (pictured above).