Home » Musings » What Defines Us

We seem to like labels.  When meeting a new person, we generally ask a few icebreakers which typically aid us in fitting people into a basic box that seems nice and comfy for us.  When I was in high school we had some basic groups.  You were a stoner if you had long hair and listened to heavy metal, even if you never did drugs.  If you wore a varsity jacket, obviously you were a jock (even though you could earn a varsity for things other than playing sports, but the band geeks never really seemed to wear clothing showing off their earned letters).  Even the jocks had a hierarchy of sorts;  football players had the most respect.  The bookworms (who seemed to have their label changed frequently to academics, nerds, geeks, etc) were the kids who sat around doing homework, playing chess, or arguing about physics problems during the lunch break.  I don’t know what term they had for the kids who played D&D (Dungeons & Dragons), but I’m assuming they fit into a subclassification of the nerds/geeks group.  And, yes, I had a nice assortment of colorful, multisided dice.  Don’t judge!

In college labels changed a bit which made things a bit easier, and we were defined by our major(s).  It was well known certain majors gave you an edge when it came to dating and being invited to parties.  The jocks were still there but were defined more by their post-graduation goals than anything else.  There wasn’t much discussion about it, but we also knew if your family had a lot of money, you were also automatically elevated.

After college, or for those who didn’t pursue that level of education, the workforce has its labels as well.  I’ve spent most of my adult work life in the healthcare industry, where things are even more clear-cut.  If you’re a physician, you’re everything.  Nurses are the wonderful pill pushers who do all the “real work” the doctors don’t.  Most people don’t realize that the x-ray techs and people who work in the lab have generally the same level of education, or more, than the nurses, but they’re definitely in that “other” category.

Sometimes our personal definitions get altered by seemingly small, insignificant moments.  Last year I went to the Philippines on a medical mission with Uplift Internationale.  This young man ended up changing me in ways he’ll never know.  I was taking pictures during our screening day.  I had seen other people covering their mouth and nose with a handkerchief or surgical mask, but it seemed to mostly be because of the pollution from the tricycle taxis that were the main mode of nonpedestrian transportation.  I tried coaxing him to lower it so I could get his picture.  The relative who had brought him finally said something to him, and he reluctantly lowered the cloth.  When I saw the facial deformity caused by the cleft lip, it almost brought me to tears.  I wouldn’t let people take my picture because I looked even more overweight, my multiple chins even more pronounced.  I felt so incredibly vain and ridiculous up against the quiet humility of this 15-year-old boy.  I left that very moment a changed person.  For years his life had been defined for him by his M-shaped upper lip.  His definition changed mine. 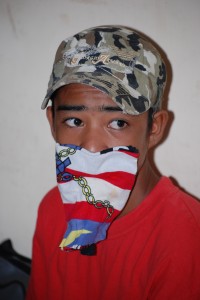 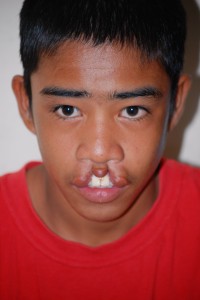 As I’ve begun planning this huge adventure that begins in about 6 months (well, at least the travel portion), this topic has again arisen for me.  The nature of my current job keeps me waxing philosophical.   I sit with dying people for almost 40 hours a week.  I listen to their stories, their memories, their musings, hopes, unfulfilled dreams, etc., so it’s natural that this would be a big, common theme for me.

Like most people my labels for myself have changed over time.  As this trip nears, I find those labels shifting even more.  When I moved into this line of work it was because at the end of the day I needed to feel like I had somehow left the world a better place, had lifted someone’s burden, no matter how small that effect was.  Then I became a parent.  But I could still achieve those things and be a parent.  In the process of deciding to turn this dream into a reality, I find I am redefining myself once again.  I still care about others and still want to lighten others’ burdens, but I can do that in other ways while leaving my child a legacy money can’t buy.  I can spend more time with him, see the world through his eyes, and create memories that will last well beyond my lifetime.  I get to see that dad label grow larger for both of us.  I can put more living into my life.

One of the nice things about the labels we use is that they’re easily altered by what become our priorities.  So what defines you, and by what will you be defined?

By the way, Edgar’s life was drastically changed by his surgery, and he’ll never know the effect he had on mine.