As I mentioned when writing about Krakow, Poland was never really on my list of places to see. Being so close and hearing so many good things from fellow travelers had me deciding to head there to check out. I already shared about Krakow. Here are the other cities we visited and my thoughts about traveling to see them.

Getting there from Czech was pretty easy. While the country is a member of the European Union (EU) and the Schengen Zone, there is still some passport control. Something that is different from its neighboring countries. If you are traveling by bus or train from another country, be prepared to show your passport after crossing the border (or before if you’re leaving Poland for elsewhere).

We left Olomouc for Krakow via a very comfortable train. Czech’s train system is quite robust, and many of them offer free WiFi and are outfitted with outlets so you can even plug in. All the staff we encountered on the Czech side were very friendly and helpful.

Not always our experience within Poland.

Poland’s trains aren’t quite as fancy, but they’re still pretty good and inexpensive. Fares can be searched and purchased online. As long as you are doing domestic travel, you can keep the confirmation on your smartphone or tablet. The conductors can scan the code from them.

As much a I dislike bus rides, do check out the bus schedules when planning your travel. Often the buses are faster and cheaper than trains. A handy site for looking at overland options is Rome2Rio.com. They’ll show airfares, but don’t trust those. For trains and buses, though, they’re usually spot on.

Be aware that when purchasing a discounted ticket for a child or student, you may be asked for Polish ID. If you can’t provide that (passport won’t count), you may have to pay extra on board to make it a full ticket. We were only asked once, and it was while using an online ticket. It may be that you won’t be asked if issued a regular paper ticket by the company. There wasn’t a fine, though, which was nice.

This is a nice, medium-sized city with a small town feel. There really isn’t much to see or do here, but it’s nice to experience a smaller, more rural town as opposed to the big urban ones that get more visits. While all the cities we visited were bicycle friendly, I think Lodz was the best for that. Lots of great paths as well as special setups at traffic signals so that you don’t have to get off your bike to press the button to cross.

It has some great parks and interesting monuments. Lodz is also home to a premier film school in case that’s an interest.

This city in the north is quite beautiful. It’s on the coast of the Baltic Sea, and there are international ferries in case you’re interested in going to some other countries by sea.

The city has a lot of history to it. World War II began not far from here as the Nazi army invaded Poland. The old town by the sea harbor received a lot of damage. The buildings in the old town area all sport practically new facades that are ornate and colorful.

I read someone describe the old town area as “Disneylandish,” and I’ll have to concur. It really distracted from the charm that most historic squares have for me. Plus all the signs from shops and restaurants, and since we were there in low season we also had annoying restaurant touts trying to get us into their place.

If you check out the old area, make sure to go along where the ferries dock so you can see the medieval crane system they used to remove shipments from the boats. It’s really quite cool to see something like it.

We stayed out of the city proper in an area called Oliwa (o-lee-vah). I actually liked this suburb much better than the city proper. It had much more charm and old world feel to it. 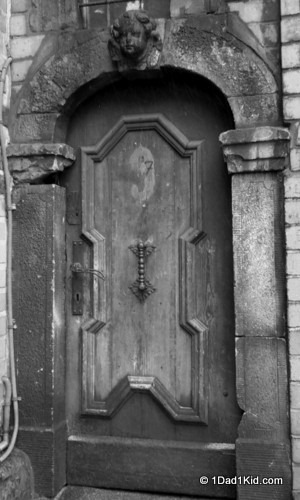 This is another “good luck pronouncing it” city name. Just write it down. But if you want to have some fun, it’s pronounced like vrot-swov.

I think I liked this city the best. It hosted the Euro Cup in 2012, so there is a rather interesting blend of modern and old. You will find these beautiful modern buildings wedged between ones that are hundreds of years old. Many buildings received makeovers as did their transit system.

In spite of feeling like a big city sometimes, it is very walkable, and there are great historic sites, funky areas, and beautiful parks.

In addition, there are lots of dwarves or gnomes (it depends on who you ask) all over the city. There are currently about 250 of them spread out all over, and it’s kind of fun to try to spot them all as you walk around. Even Tigger got into the fun.

Originally we were going to skip this town, but I’m glad we didn’t, and I would add it to any Poland itinerary. It’s a 4-1/2-hour bus ride from Prague, too. 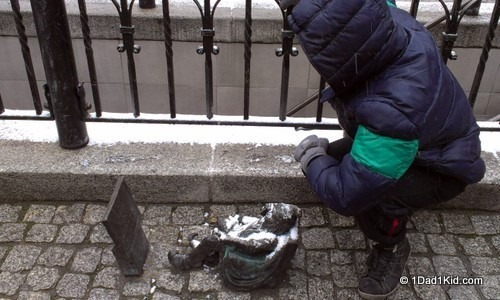 We had an absolutely incredible, almost indescribable, experience at Auschwitz, and we enjoyed Krakow and Wroclaw, but overall I can’t say Poland is a place you should go out of your way to experience. We much prefer its neighbor, the Czech Republic. I know other people absolutely adored it, but we enjoyed Czech much more. In fact, we didn’t explore more cities in Poland simply because we were ready to return to Czech after a few weeks.

Have you been to Poland? What do you think?