Vietnam’s population is comprised of 54 different ethnic groups. In addition, China and France have left indelible marks on this southeast Asian country. It’s no wonder Vietnamese cuisine is so incredibly diverse.

The noodle soup pho is probably the most famous Vietnamese dish. While pho is quite enjoyable, it pales in comparison to other Vietnamese cuisine.

There is no way to sum up the large array of food in Vietnam, but I’ll touch on some basics. 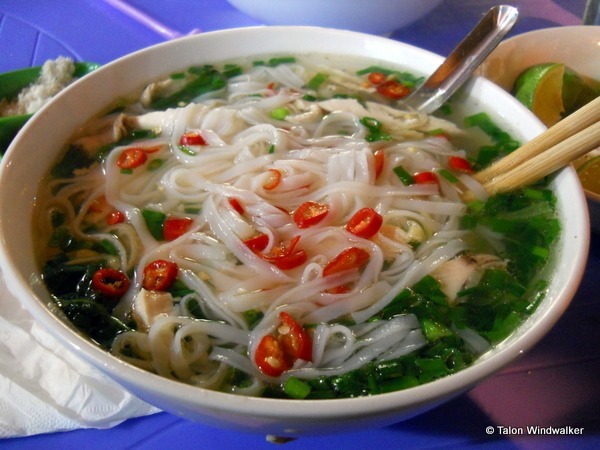 I’ve always been a bit mystified as to why soup is so huge in this steamy country. Living for so much of my life in the Pacific Northwest and in Colorado, we have definite soup weather. I associate soup, chowder, and stews with fall and winter weather. When it’s cold and damp outside, nothing can warm you from the toes up like a nice hearty stew or chowder.

Perhaps it’s, like with Chinese food, a belief in the medicinal value of food. Or perhaps it’s related to the older days where refrigeration wasn’t something that existed or was easily acquired. I imagine keeping food at a boiling temperature is safer than leaving meat to sit out for hours.

But even in this sweltering heat, I’ll gladly order a bowl of liquid deliciousness.

A strong contender for pho’s crown is the dish known as bún chả (pronounced boon chah). This northern Vietnamese dish, believed to be a Hanoi specialty, should come with instructions. Although it did provide great entertainment to the proprietor when I looked at the three bowls of food sitting before me and asked “How do I eat it?”

For the more adventurous, there is bun rieu. Like pho, there are regional variations, but generally it’s more of a seafood lover’s type of dish.

If you want to participate more in the preparation of your meal, then order a claypot dish. In the north, these were usually small, manageable portions. However, in the cool mountain town of Dalat, a claypot order could easily feed at least three people. I found this out by surprise when I ordered it thinking I was getting one of the nice, smaller pots. 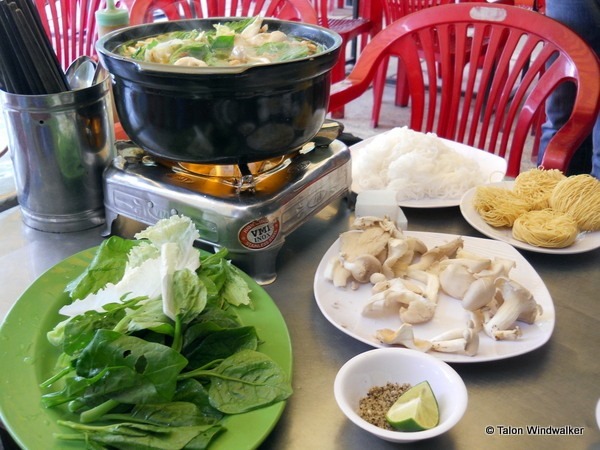 How do you know which you’re getting? Generally, you’ll notice the small reddish claypots sitting around in the restaurant or street food cafe. If you don’t see them but notice claypot on the menu, you may be getting the larger cauldron. Another way to possibly differentiate between them is the price. The smaller ones are often around 60,000 VND (about $3 USD), and the large ones are closer to 150,000 dong.

Almost always a diverse assortment, street food in Vietnam has something for everyone. “Meat on a stick” is readily available, although it tends to get added to a lovely French-style baguette and called bánh mì. Some vegetables will get added along with a slightly spicy sauce. The result is a filling combination that delights your taste buds with a wonderful mix of unique flavors. Vegetarians can usually find tofu quite easily. 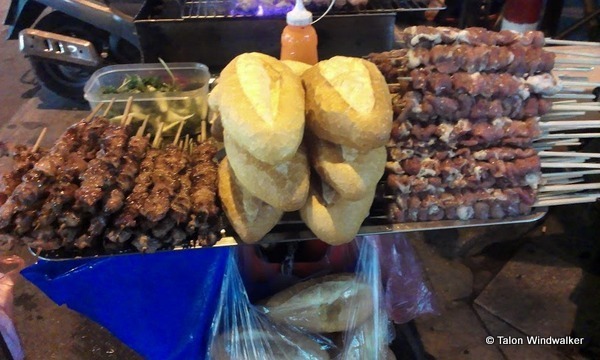 This blend of diverse flavors is one of the trademarks of Vietnamese cuisine. Where Thai food brings several sweet and sour flavors together and joins them, this country’s food highlights individual flavors. The taste of each ingredient stands out making it quite delightful. Even if it won’t make you break out in a sweat.

My recent street food addiction is bánh bao. They closely resemble Chinese dumplings, and we like to refer to them as “crack balls” because they’re remarkably addictive.

Imagine pork or chicken mixed with onions, mushrooms, and vegetables. Add a couple of hard-boiled quail eggs, wrap it in a fluffy dough, and cook it with steam. It may not sound like much, but once you’ve bitten into one of these delightful soft balls, I think you’ll be hooked, too. 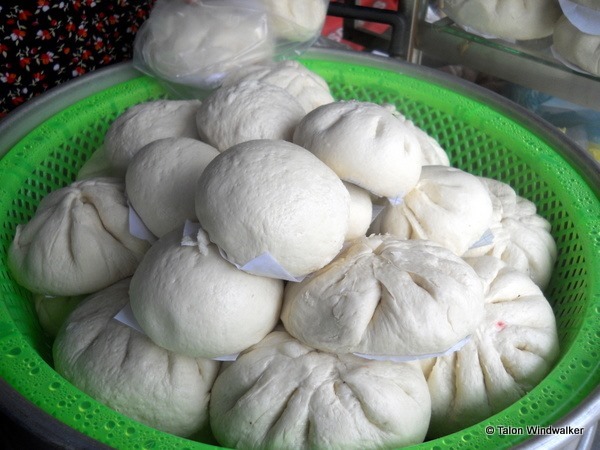 Not only will they please your mouth, but they’ll make your pocketbook sing as well. The average price for a dumpling a bit larger than my palm (and I have large hands) is 10,000 VND, or about 50 cents. I have found them for as low as 3000 dong, though. Two can easily be a meal.

Just remember to peel the paper off the bottom before biting into it. Picking out partially masticated paper from your mouth isn’t as much fun as it might sound.

These are usually served fried or fresh. When they are listed as fresh, they are usually wrapped in rice paper. It looks like plastic wrap, but it’s 100% edible and has a very mild, subtle flavor.

Spring rolls are often a vegetarian’s best friend and when served fresh they can be quite healthy. When ordering these in a restaurant, don’t be surprised if you have the opportunity to roll them yourself. I think it just adds to the fun.

The best fresh spring roll I’ve had so far were catfish spring rolls. They had amazing flavor. Of course, it’s hard to go wrong pairing fresh herbs with grilled fish. Just another example of the explosion of flavors that is common with Vietnamese food.

When served fried, they are very reminiscent of what are often called eggrolls in the States, although they are smaller. I love the texture of the crunchy wrapping, but I don’t find the flavors to be quite as good as with the fresh rolls. The flavors are more homogenized when fried.

The Vietnamese culture is very social. At night you will find locals in the street seated on small, low plastic chairs at roadside cafes, sharing food in restaurants, and/or playing games in coffee houses. It is fun to hear them laugh and tease each other. Vietnamese people are very playful, especially in the south, and you really get to experience this in the nighttime eateries that seem to spring up out of nowhere. Like in France, meals are meant to be enjoyed and shared.

The food is just part of the overall experience.

Do you have a favorite Vietnamese cuisine that wasn’t included above? Please share it with us in the comments section!