When people travel, they don’t often consider visiting the dark places in a country or city. Poland has a great share of historical sites, and Auschwitz is definitely one of the must-visit sites in this eastern European country. Yes, the former concentration camp is an intense visit, but it tells a story that needs to be experience firsthand.

Located about an hour and a half outside of Krakow in the small city of Oświęcim, there are two parts to the largest and deadliest Nazi concentration camp: Auschwitz I and Auschwitz II, also referred to as Auschwitz-Birkenau or just Birkenau. The second site, which was even deadlier than the original camp, is located about 2 km away. There is a free bus that goes between the two camps.

Personally, after touring the primary site, I didn’t have the heart to go to Birkenau as well.

There are many options for traveling to the infamous site, including:

If you wish to walk, it takes about 20-25 minutes. As you come out of the train station, go to the sidewalk along the street and turn right. When you get to the roundabout, turn left. Follow that straight down. You really can’t miss it. It will be on your left.

If you take the train and want to go by local bus, the stop is at the train station. There are a number of routes that will take you by the camp. They are listed on a flyer inside the shelter area. 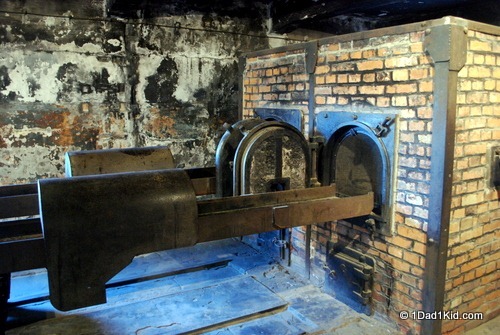 To tour or not to tour

I’m not a real fan of tour groups; however, I’m even less of one at this site. If you visit between the months of April and October, you will be forced into a guided group if you arrive after 10 AM or before 3 PM. We visited during the low season, and the presence of the various tour groups was quite annoying, so I can’t even imagine what it would be like to be in the groups during peak season.

Granted, you will learn more about the site with a guide, but they seemed to be rushed, and the groups were quite large. Without a guide, there are still plenty of signs and markers, so you can certainly experience a lot while doing it on your own.

If you plan on doing a group tour, check the museum’s website for the schedule. This is especially important during low season as English-speaking tours are offered at fewer frequencies. 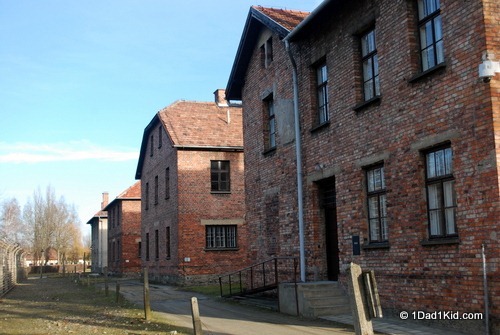 If you are doing a self-guided tour, there is no admission fee. English-speaking tours typically cost 40 PLN ($13 USD) per person. The website states visitors should plan on 1-1/2 hours to visit both camps. I would beg to differ. We did a self-guided tour, and we easily spent 2 hours at Auschwitz I alone. If you’re doing a guided tour, you won’t have a choice, but if you’re going on your own, allow a minimum of 3 hours if you want to do both sites. I would be surprised if even the guided tour is that short.

Guided tours are not necessary at Birkenau.

In addition to the buildings, many of the cell block buildings have a special exhibit inside them that occupy more than 1 floor of the structure. They are haunting, intense, and powerful. We limited the number of exhibits we visited simply because it was too emotionally draining.

When taking photos and walking around, remember that many people consider this whole site to essentially be a massive graveyard. Some people who are visiting lost family members who had been imprisoned here. The whole site and its visitors should be treated with respect.

There are some bathrooms (marked as WC) throughout the site. Be prepared to have to pay anywhere from 2 to 2.5 PLN to use them. There are also a few places serving food and drinks at the museum entrance and in the bookstore. 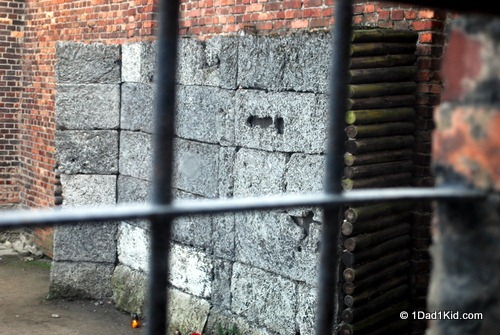 There aren’t a lot of occasions where I would include tips on things to do after visiting a place. However, Tigger and I were greatly affected by our visit. I would say to not plan on doing much afterward, or make sure to plan something that will be a lot of fun and serve as a distraction. This is the kind of place that is really hard to get out of your head.

Why visit Auschwitz? It sounds so awful!

“Lest we forget” is an oft-repeated phrase when it comes to the Holocaust and its atrocities. It is one thing to read about the events in books, see photos, and watch documentaries, and it is quite another to stand in this place and bear witness. As hard and as intense as it was to visit, I’m glad we went. It gave me a perspective I didn’t have before, and it impacted my son much more strongly than if we had simply discussed it.

We need to witness these sites first hand to make sure these events are never allowed to happen again. Genocide and ethnocide are tragedies that are still happening in the modern day. The experiences we have by immersing ourselves in these memorials help solidify our resolve and awareness.

Frankly, I can’t imagine coming to Poland and not visiting this site. It’s just too important.

Obviously, only you know your children and their maturity level. If you stay away from the exhibits and the film, it’s an appropriate site for any age. The exhibits are quite graphic at times.

I’m not sure I would take a child under 9 through the exhibits, but again that would depend on the individual child.

If you have a chance to visit Auschwitz, I hope you will go and bear witness.