Having traveled around a lot of Europe, we’ve seen a lot of castles. Some leave indelible impressions on you while others are only impressive in the moment. We visited Chateau de Chenonceau while on a Loire Valley tour with City Wonders, and it left a vibrant impression on both me and my son. 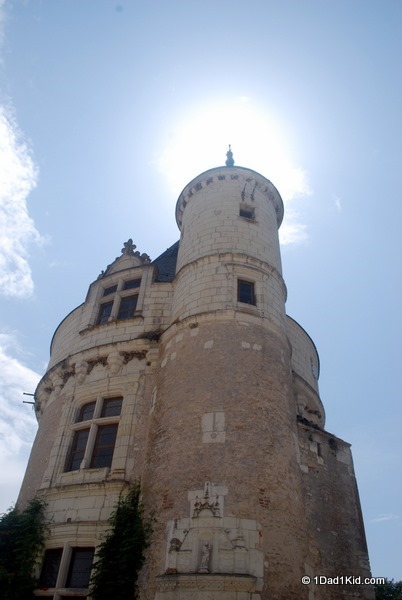 A Brief History of Chenonceau

The castle was originally built in 1513 but was later significantly embellished by Diane de Poitiers, the favorite courtesan of King Henri II. She was a brilliant woman and eventually had so much trust from the king that she had the authority to sign official letters, which she did as “HenriDiane.” Even the pope recognized her authority and influence over the king and included a gift for her when he sent the Golden Rose to the queen.

Queen Catherine had wanted the chateau for herself and was none too happy that it had been given to Diane. When the king was wounded during a joust, Catherine could finally act and had Diane banished from Chenonceau. Inside Diane’s former bedroom were the joined monograms of Henri and Diane. Catherine had them all altered so that they would look more like an H and C. Some of the alterations are more convincing than others. 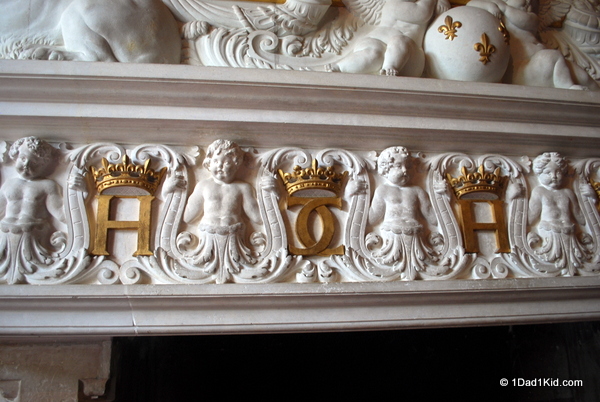 While many chateaux were plundered during the Revolution, Chenonceau was spared thanks to the clever Madame Dupin who owned it and was living there at the time. It was no longer an official property of royalty, she explained to the crowd. She had filled the small chapel outside the entrance to the castle with wood so that she could pass it off as simply an area where she stored the necessary material for winter heating (not only were there antiroyal sentiments at the time but also anti-Church).

Thanks to this, most of the furnishings, statues, etc., inside Chenonceau are the actual pieces, unlike castles such as Versailles.

During World War II the chateau represented the border between occupied and free France.

If you’ve seen the movie Ever After, you have also been treated to some views of the chateau as some of the movie was filmed here.

Unlike most of the other castles in France, Chenonceau is privately owned. The Menier family, famous for their chocolates, has owned the estate for over the last 100 years.

Unlike the Chateau de Chambord, this castle is much easier to get to. There is a train station at the end of the parking lot, so you can easily visit from Paris or elsewhere. The high-speed train takes just about 1 hour from the Montparnasse station in Paris. From the Chenonceau station, it’s a nice, short walk to the estate.

We visited during the height of the tourist season, and it was nowhere near as crowded as Versailles.

If you aren’t visiting as part of a tour, I definitely recommend paying the extra 4.5€ for the audio guide. There is a lot of interesting information you will miss without some sort of a guide. There are a few signs within the castle, but really they don’t give you much information at all.

I was very glad we came here as part of a tour, because I don’t think we would’ve learned nearly as much with even the audio guide.

Admission for adults is 12.5€ without the audio guide, and children ages 7 through 18 will need to pay 9.5€. The student discount (for adults) gives the same price as the children’s tickets. Night walks in the gardens are 6€ (under 7 years old are free).

They have preserved the old vegetable garden, and it’s interesting to walk around it. If you’re there at the right time of year, you will notice that there are some rather short apple trees. Apparently, they were hybridized this way so that women could maintain their modesty while picking the fruit.

As you approach the chateau, which is an impressive sight, you’ll notice an incredibly beautiful garden (well, if you’re there during the right season). This is Catherine’s garden. Diane’s garden will be to your left on the other side of the bridge. You’ll notice their two very different styles. When you’re in the chateau, make sure to look down on the gardens. The contrast is quite profound.

If the flowers are in bloom, you’ll notice many pink and blue flowers. Pink was Henri’s color (back then pink was for boys and blue was for girls). She had them planted to symbolize their unity as king and queen.

The chateau itself has such a tranquil feeling to it. Instantly it felt like a place I would want to live. You immediately slow your pace and long for a bench or something so you can just sit and soak it all in. It’s no wonder it was beloved by so many people.

One of the more interesting rooms in the chateau is known as The Black Room. Queen Louise, who was married to King Henri III, lived in the chateau and adored it. After the king was assassinated, she was so overtaken by grief that she had all the colorful furnishings removed from the room and replaced with black ones. The walls and ceiling were painted black as well. The walls were also decorated with symbols of mourning. She wore white (the royal color for mourning) until the day of her death and was also known as The White Queen because of this. She mourned him for the remainder of her life.

If you have extra time, you may want to consider renting a boat and spending some time on the river. If you’re traveling with younger children, you can also find a nice playground on the site.

There are some cafes and restaurants on the premises, and you can even do a wine tasting while you’re there. 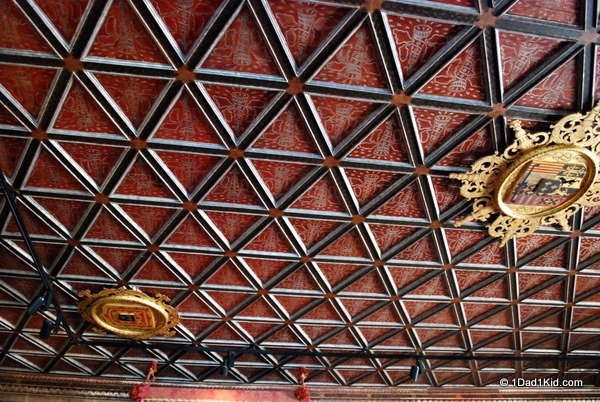 I absolutely adored the chateau. I actually like it more than Versailles.  Its simple elegance is inviting and soothing. Being able to sit and gaze at the woods and river through the windows is so tranquil. I would love to go back and spend more time just sitting in the gardens.

However, I think the highest praise comes from Tigger who despite being thoroughly “castled out” also loved it there and said it’s now his favorite castle.

If that doesn’t convince you to go there, I can’t imagine anything else will.

Have you been to the Chateau de Chenonceau? What was your favorite part or sight?