Aside from eating lots of cheese, bacon, breads, and imbibing  large quantities of wine and other spirits (after three months in Morocco, don’t judge!), I had a couple of other things planned for our time in Lyon. One of them was visiting the ancient Les Theatres Romains.

As I mentioned previously, being from the States I am fascinated by buildings and other things that are hundreds of years older than my native country. I had seen some photos of this particular set of ruins, but really the photos can’t do it justice.

Experts have dated the ruins to be just over 2000 years old, having been built circa 15 BCE, making this one of the oldest in Gaul. This area was one of the most important cities in Gaul, and the theatres were built on top of the hill overlooking the city with its two rivers.

Think someone had a flair for drama? 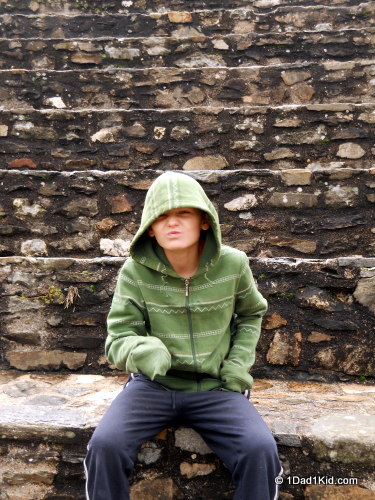 Tigger pretending to be an old man (because the ruins are old, get it?)

The stage was set strategically so that as people gazed upon the speaker their vision could not help but drink in the scenery of the valley below them.

The sitting area was formerly backdropped by a large wall that did not experience the same longevity as the other parts of the ruins. The acoustics of the design are so phenomenal that the voice of a person standing in the center of the stage, while speaking normally, can be heard clearly no matter where one sits.

And that’s without the help of the former wall that used to bounce sound waves back to listeners! It’s rather quite impressive.

As you face the main theatre, to the left is a smaller one, called the Odeon.  It’s a bit older having been built at around 100 BCE. It is believed that this was an area for musical performances. The acoustics here are even more astounding.

The floor of this stage is even more ornate with multicolored marble that had been brought in from all over the Mediterranean. 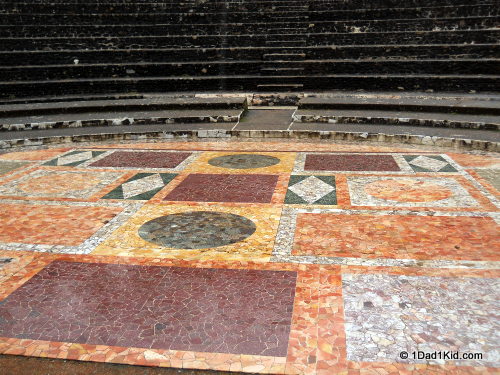 You can climb the sitting area, test out the acoustics for yourself, and marvel, as I did, that you are standing in an area where important people of the day stood giving speeches, or attended performances, over 2000 years ago. It still boggles my mind.

Combined, the theatres provided seating for about 13,000 people.

To the right of the large theatre area is a collection of stones. I don’t speak Latin, but it would appear that many of these stones are from memorials found in the area. There is an adjoining museum, which I’m sure has better explanations about some of the sections of pillars and other stones, but as Tigger greatly feared “being bored to death and falling asleep while walking,” we did not check it out. 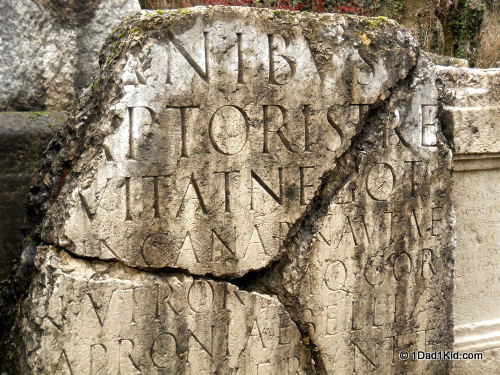 The easiest way to get up the rather steep hill to view the ruins is by the funiculaire, which is found in the Vieux Lyon station.

If you have a metro pass, carnet, etc., it functions on the funiculaire, so really the easiest is to take the metro to the station, exit the train, and follow the signs to the funiculaire. It runs about every 7 minutes or so according to the posted schedule. (Take the funiculaire headed toward St. Just and get off on the 1st stop, Minimes.)

Signs are not super helpful for locating the ruins, so you get to benefit from our confused walking around in the freezing cold while it threatened, and tried, to rain on us.

Are you feeling extra grateful now?

When you leave the station, turn to your right. It’s a short walk, and the ruins will be on your left. They’re easy to spot as you get near them.

While you’re up here on the hill, you might want to head over to the basilica. It’s a rather beautiful building which also offers absolutely wonderful views of the city of Lyon. You really only need 2-3 hours to view both the ruins and the basilica. 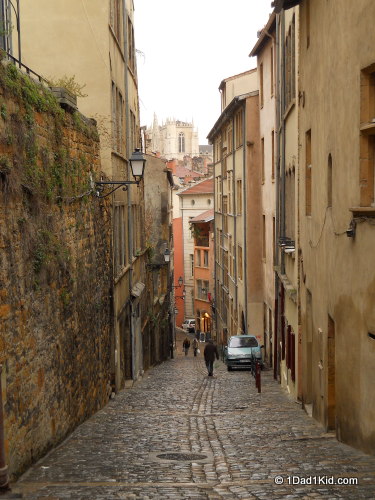 For the return trip, I recommend walking down. It is quite scenic, and you will see some very old parts of Lyon that you likely would not see otherwise. It is a bit steep in spots (but you’re going downhill), and the roads are cobblestone.

It’s really worth it.

Near the bottom of the hill are some great pubs, cafes, and bistros, which make a perfect ending to your little journey.

Museum Admission:
Adults: 4€ (about $5.35)
Children under 18 are free.
Thursdays are free.
The museum is closed on Mondays.

Admission to the archaeological site is free.