We are not usually fans of tours, but given the fact that it was winter in Iceland, which is known for its mercurial weather, and the roads were pretty icy, I decided to let someone else do the driving. Gateway to Iceland is a tour company with a good reputation, and we were invited to be their guests on their south coast tour.

One of the reasons I was interested in their tours is that they keep group sizes to much smaller numbers. Being part of a whole coach tour bus just doesn’t appeal to me.

Because of Iceland’s very short amount of daylight during winter, we left and returned in the dark. Another reason I was quite content to let someone else do the driving. Aside from that, though, our guide/driver had a huge amount of information about local folklore and events. 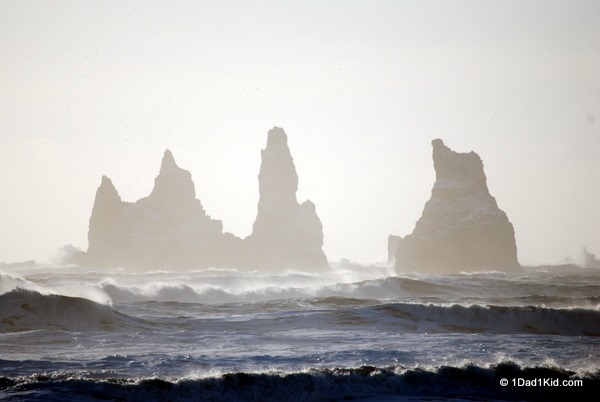 It was very interesting to see with your own eyes just how much Iceland has grown, the physical part of it, since the days when it was settled. It’s a strong reminder that the country’s foundations are still quite very active. Iceland’s landmass grows about 1-2 cm a year.

I also enjoyed hearing tidbits of history such as how trails between regions were measured by how many pairs of shoes would be necessary to complete the journey. As shoes were handmade from skins and other natural items, people needed this information for their trek.

The Icelandic language can be fairly entertaining for a native English speaker. You have to use your tongue in new ways. I’m pretty sure I had the tongue version of a Charley horse while trying to pronounce Sólheimajökull, the name of the glacier we visited.

You have to appreciate the twinkle in a local’s eye while they watch your face contort as you try to say some of the Icelandic words and names.

The two falls we stopped at were beautiful, and the glacier was interesting to see as well. It has retreated quite a bit over time, and it’s fascinating to see the boulder-strewn valley and lake that have been left in its wake.

During our stop for lunch, we learned another valuable tip: In restaurants, when you order a bowl of soup you get free refills of the soup and bread. Given how expensive restaurant meals can be, that’s pretty useful information, and I availed myself of that opportunity.

While the glaciers, waterfalls, and stories were all enjoyable, there was one place in particular I wanted to see, and that was the basalt columns on the black sand beach near Vik. When we arrived, I couldn’t help but utter a loud “Oh wow!”

The cliff face looked like something straight out of mythology. You almost expect to hear a troll’s rumbling snore coming from within the mountain. It’s one of the coolest natural wonders I’ve ever seen. And the beach’s graduating sand layers (from black rocks to small granules as you approach the sea’s edge) just add to the sense of awe. 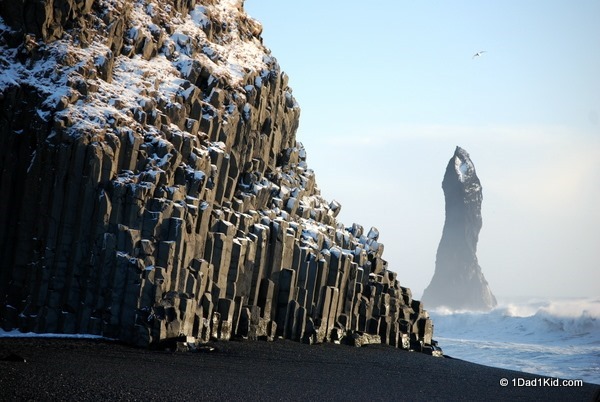 Tigger is even less of an organized tour fan than me, so when he informed me that he enjoyed the tour and found it interesting, I can’t imagine a more solid recommendation than that.

Make sure to visit our Facebook page for more photos from our time in Iceland.

Do you like organized tours? Have you done one that was exceptional?