The life of gay people in Malaysia, the female perspective

Home » Malaysia » The life of gay people in Malaysia, the female perspective

–I recently did an interview with a gay Malay Muslim male about his experience of life for gay people in Muslim Malaysia, and I wanted to share a woman’s experience as well. “Miss PLU” graciously accepted to be interviewed.

I’m in my 30s and a female. The sexual orientation would be a lesbian or what the local gay community calls a “PLU” which stands for “People Like Us.” I am a Malay and a Muslim. Not active but still believe in Him today.

Being a Muslim tends to make it difficult to be open to the family. Mine probably know, but they are in denial and think that this is a phase which I will get out of one fine day. I don’t push them to accept me this way because it takes time for older folks to understand, especially in our culture as well. My siblings are more open to it and as long as I’m happy, they’re happy too. I have PLU cousins where one family is able to accept her for who she is (a butch) and another forced her to wear feminine clothes when going out with the family, because she is a butch. It’s tough for them and because of this they want to run away from their family and be with people who accept them instead.

[Editors’s note: In case you aren’t familiar with the terminology, a butch means a woman who has more masculine behavior in dress as well as in other areas.]

Do you feel that you are able to be “out” in your daily life, or are you only able to be open with close friends?

I keep my life private as I don’t want it to be a problem for the family. I am more protective of them than anything. As I look like any normal girl, everyone assumes I am straight. I only open to those who are also gay and those who are open minded. Sadly, not everyone, even friends, are able to accept a lesbian friend compared to a gay (male) friend.

It depends on who you surround yourself with. People are more accepting towards gay boys/men as opposed to lesbian women so it’s become very normal to see them around town. However, they don’t do public display of affection, not even holding hands as this is still an Asian country. There used to be such grand PLU parties in town a few years back where we would stay up all night meeting like-minded people. That has somehow disappeared, and now the night scene is mostly for the gay boys/men while the girls change scenes and are more active in arts, live band shows, etc. In terms of PLUs having a family of their own as single parent or with a parent, that’s still relatively new here and not many people out themselves about it.

Malaysia has some potentially aggressive policies and laws. Do you ever feel afraid you will be arrested for being homosexual?

Not really. For a Muslim, if you’re caught with another man, you’re most likely to be taken in and advised to get married (legally bound) as sex before marriage is considered a big sin. However, if you’re in a room with the same sex, we’re unlikely to be caught, and this makes the relationship more comfortable and free compared to straight relationships. If you go to the massage parlour (for the men) and get caught during a raid, then yes that will not be a happy scene. 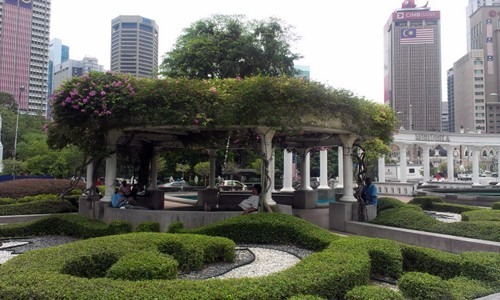 Do Muslim teachings and attitudes toward homosexuality make it difficult for you to engage in your faith? Did you ever go through a period where you had a crisis of faith because of what the religion teaches about homosexuality? How did you work through it?

I believe that God made everyone this way for a reason and for me that is enough to keep the faith going. It has made me a stronger person and made me so much more sure of myself than ever before. I have gay friends who pray 5 times a day, perform Haj and never miss a day of “fasting” during Ramadan. It’s what keeps us going, this faith. No matter what happens, we still have Him to lean on. Even when others may not accept us, He will. So no, I never had difficulty in engaging my faith as I never have doubted it at all.

If you’re in or have been in a same-sex relationship, did you feel that you were able to be open about it? I know some Americans, where homosexuality is more accepted in some areas, still pretend they’re roommates to most of their friends, family, and coworkers. What has been your experience?

If no one asks, I don’t tell. Asians are still very shy and mostly keep to themselves so there’s not many who would go to you and ask point blank “Are you a Lesbian?” because they feel it’s embarrassing enough to just ask. I try to keep my private life out of my career life as people may want to use it against me should I be successful one day. It’s just better this way. If you looked like a tomboy/butch, they would go “Ok she’s gay, we’re cool about it,” but when a girl is femme as hell, like me, they go “Why? Why? Why?” because they feel there’s still a chance for me to be straight.

If a gay foreigner was considering visiting or moving to Malaysia, what suggestions would you give them?

I would say “Welcome!” You’ll be surprised that people are very open when it comes to gay foreigners compared to gay locals. They feel proud to know one! Stay in areas which consists of business people, expats, the modern types such as Hartamas, Mont Kiara, anywhere in Kuala Lumpur city and you should be ok. Actually you’ll be ok anywhere because locals just love to be friends with a foreigner.

Do you foresee a time when being gay or lesbian will be accepted in Malaysia? What do you think needs to happen to change attitudes?

This will be hard, especially for lesbians, as the elders still want their girls to end up marrying a nice man, to bear children. Over here if you’re a single woman (lesbian) and want to adopt, it will be a tough process as the authority will ask many questions and one of them is “Will you want to get married anytime soon?” It’s easier for gay men to adopt, though, mainly because the man is known as the leader in a household, so it’s no problem for them. I do hope it will be accepted some day. I feel that slowly it is being accepted in KL, but in terms of career, most companies still want to “look” at you before deciding, and I’ve had many lesbian friends who were turned down for jobs because of the way they look (butch). Only certain industries accept us, such as the entertainment industry, arts, advertising, media, PR, and banking, among some. I think people should start accepting us for who we are and stop asking all the “Why” questions.