When I was preparing for our Paris trip, I came across an opportunity to take a tour with City Wonders. I saw their full-day Loire Valley tour that also included lunch and a wine tasting. They offered to host us, and how could I possibly say no? The Loire Valley has been on my list of places I’ve wanted to visit for a long time, so I was really looking forward to this tour.

Neither of us are fans of guided tours, except for perhaps a food tour; however, I noticed that they build in free time to explore on your own at each stop, so I felt more comfortable with that. It turns out the Chateau de Chambord has a rather quirky and interesting history, and I was so thankful we visited as part of a tour. Our guide (Adam) was absolutely incredible.

The chateau and estate are being renovated. They completed one portion last year, 2015 is a gap year, and they’ll be working on the other side of the castle beginning in 2016. I was happy we went when there wasn’t a bunch of scaffolding.

As is the case with most monuments, palaces, etc., in France, Chambord isn’t just a castle museum. They have different activities throughout the year, including a large flea market on the grounds every May 1st. The park around the estate has multiple bike and pedestrian paths, and you can also hire a boat. You can go horseback riding, too. 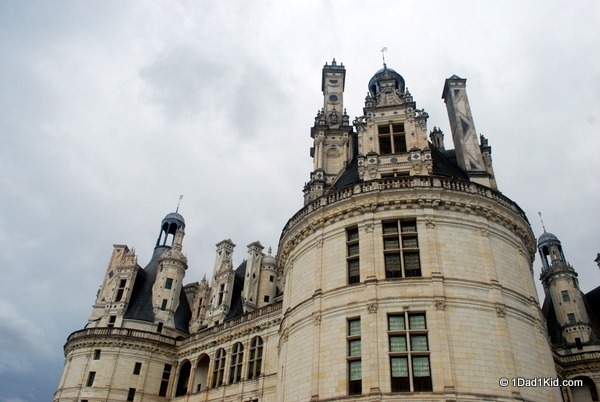 This castle was never intended to be a permanent residence. King Francois I had it built as a hunting lodge, and construction began in 1519. Francois was very fond of Tuscany and reportedly employed popular Florentine designers to come up with the plan. Leonardo da Vinci is even rumored to have participated in some of its design. It’s easy to imagine that he was behind the structure’s double-helix staircase. Apparently, Francois I and Leonardo were very close, and the French king is credited with having helped spread the Renaissance movement.

This staircase is just one of the many quirky attributes of the castle. Its design ensured that someone going up the stairs would be unseen by another person descending at the same time. It’s assumed that this was ultimately to help Francois enjoy his philandering escapades more easily. 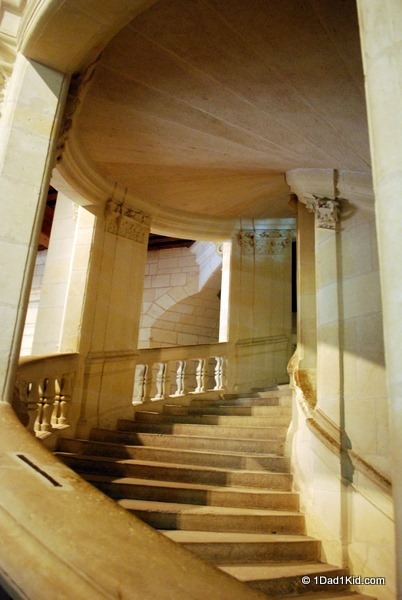 The castle, which was the inspiration for the chateau in Disney’s Beauty and the Beast, had several owners and long periods of abandonment.

Francois wanted the chateau to appear like a city’s skyline which explains the many towers and spires. 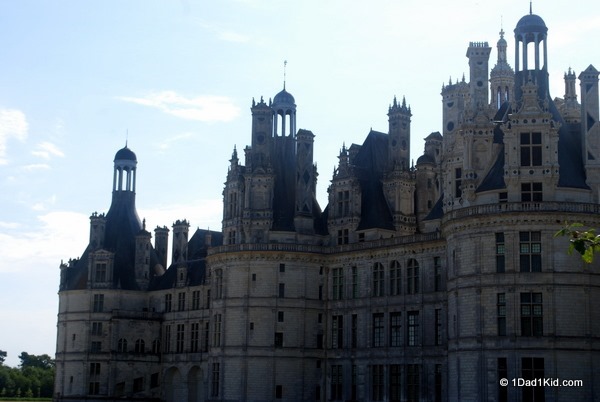 The longest period of use was from 1725 to 1733 when the exiled Polish King Stanislas Leszczyńsk (Stanislas I), the father-in-law of King Louis XV, lived there. I guess if you’re acclimated to Polish winters, the Loire Valley isn’t so difficult. 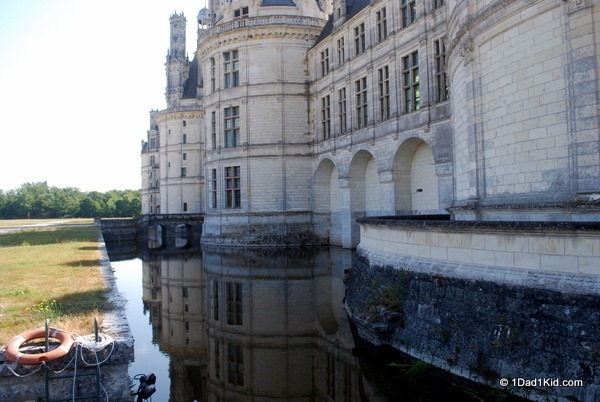 Francois reigned for 32 years and began construction on his lodge four years into his reign, but he only spent a total of seven weeks at Chambord. There were some financial reasons that delayed construction at times, and his capture and imprisonment reduced some of the possible time he could spend there, but I think that short time period really highlights there were some real problems with the chateau. 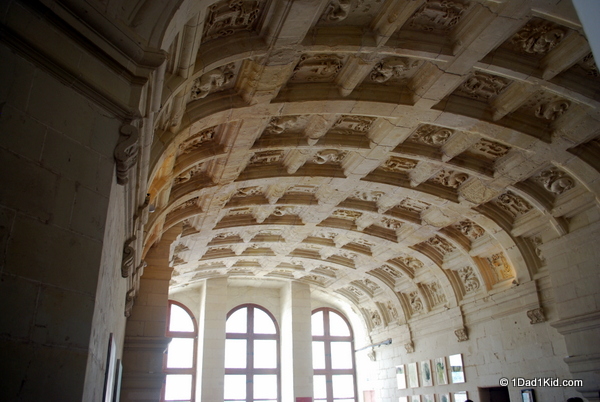 Initially, the castle was not a place people enjoyed visiting mostly due to its bizarre Tuscan architectural design. As you might imagine, Tuscan buildings have a much different design than ones better suited for the Loire Valley. They tend to be more open and airy as Tuscany don’t have the harsh winters that this region of France can experience. When everything around you is freezing, having open spaces in a building just isn’t practical. The fireplaces were designed more for show than function, too, which isn’t an ideal setup.

To add to an already long list of discomforts, the staircases for moving between rooms are also located outside the wings, so one is exposed to the elements, and watchful eyes, every time they need to move to another floor.

The location of the huge estate (about the size of Paris!) wasn’t great either as there was no nearby village, so there was no immediate source of food except game. This meant that they had to bring almost all their food, enough for roughly 2000 people, with them when the king visited Chambord.

Today, the inside sports some interesting graffiti carved into its walls and is also used to exhibit contemporary art. 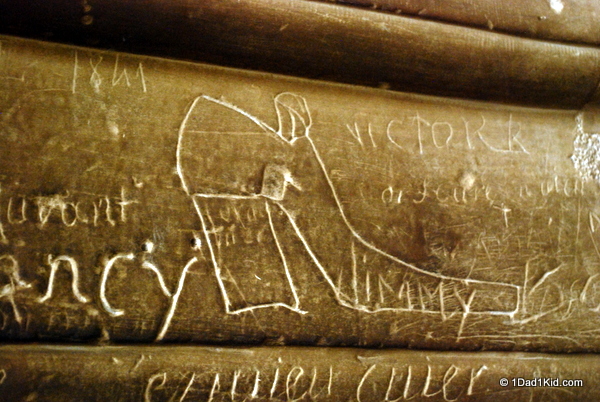 The chateau is about a 2-hour drive from Paris.

Between April and October, there is a shuttle from the nearest train station (about 25 minutes away) to the chateau grounds. The train ride from Paris to this station (Blois-Chambord) takes about 1 hour 40 minutes.

Due to its fairly remote location, you might want to consider a tour if only to remove the transportation hassle. However, I recommend visiting the chateau as part of a tour anyway because you really won’t get the same amount of information and history from the audio guides.

Admission (without a tour) costs 11€. Children under 18 are free. There are many ways to qualify for a reduced or free admission as well. 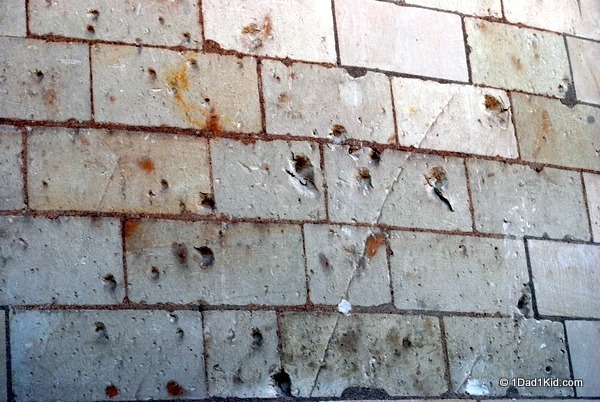 It takes a lot to impress me, especially with guided tours. While we were guests of the company on the tour, I wasn’t asked to review them or specifically include anything in my post. However, our experience was so good that I wanted to take the time to include some specifics we really enjoyed: 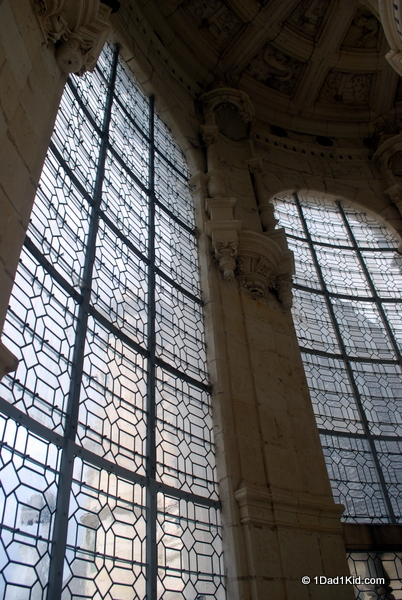 For a visit of this nature, I would recommend going as part of a tour, especially if you aren’t staying in the valley. I can definitely recommend that City of Wonders be the company you go with. This tour was one of our better experiences over the last several years, and Adam was the best guide we’ve ever had.

Tigger gave the complete tour experience a 9/10 if you want the teen perspective.

Have you visited Chateau de Chambord? If so, what was your favorite part?