There are so many incredibly good Budapest restaurants that it’s going to take a long time working my way through all of them, but it’s a challenge I’m willing to face. This post will be updated regularly, especially since Budapest is constantly having new arrivals appear on the foodie scene. The recent win of the Bocuse d’Or by a Hungarian chef helps highlight how attractive Budapest is for food lovers.

Because there are so many varying tastes out there, I only list restaurants that I have personally visited. I can be rather picky about food quality and am not ashamed of that, although I do try not to be a full-blown food snob.

When discussing prices, please keep in mind that means from a Budapest perspective. I would say average restaurant prices in Budapest restaurants are around $5-6 USD for a main dish (although certainly can be lower). 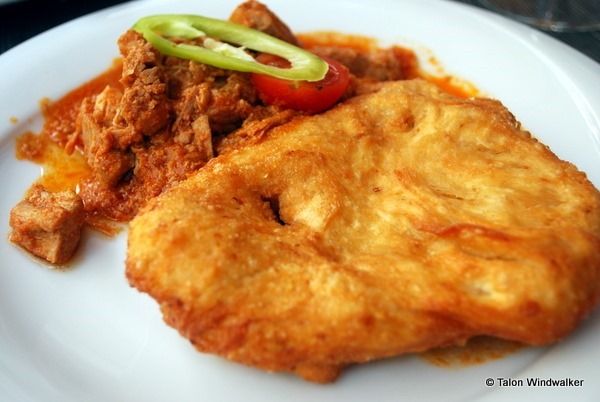 If you haven’t tried something more than the infamous guylas (goulash), you’re missing out. Unlike what most people think of when considering Eastern European food, Hungarian cuisine has quite a bit of flavor. Paprika is an essential ingredient in Hungarian dishes, and it isn’t the slightly pungent spice you’re probably used to. In Hungary, there are many different kinds of paprika, and there is a sense of national pride about this spice.

The traditional cuisine was suppressed during the Communist regime when families and restaurants were expected to eat dishes from the national cookbook. With Communism long gone from the nation, traditional dishes are seeing a resurgence, and I’m so glad! Hungarian food is quite varied and very delicious.

As you might expect, pork holds a prominent place in these dishes (about 47% of meat consumption in Hungary), but goose, duck, and fish are also quite popular.

Korhely Faloda & Daloda is a wonderful restaurant located in the Liszt Ferenc square right across from the gorgeous Academy of Music. There is outdoor seating during the pleasant seasons. I went here as part of a food tour and had the Mangalica pork with langos, and it was phenomenal. Their langos was the best I’ve had in Budapest, and I’ve had a lot of langos.

Their prices are more toward the expensive side for Budapest, but most visitors will consider them pretty reasonable, especially if you’ve recently spent time in western Europe.

If you’re visiting with kids, this is a great spot because they can run around the square and burn off their extra energy while you enjoy your meal.

Hungary was home to one of the largest Jewish populations in Europe, and it still boats a large number today. The former Jewish district has some of the most delicious Hungarian food found in Budapest. It also is home to some of the better ethnic food restaurants in the city.

Kádár Étkezde is one of my top recommendations for Hungarian and Jewish cuisine. If you were just walking by, you probably wouldn’t stop in, and that would be a mistake. The atmosphere is very much like a small town diner, and the food is fabulous. My favorite dish there was the paprikas csirke (paprika chicken). Although, I did have other dishes there and they were all great. Servers don’t speak a lot of English, but they do have a menu in English.

Another great restaurant, although a bit pricier, is Fülemüle Étterem. I highly recommend the cholent dishes, but you can’t go wrong with any of their selections. Food preparation takes a bit more time, so don’t come here if you’re in a rush. It’s totally worth it. We like their goose cracklings as an appetizer.

For dessert or breakfast, you definitely want to have some flodni from the cafe/bakery Noe Cukrászda.

If you want a better vegetarian selection or perhaps some fusion Jewish cuisine, check out the slightly pricy Kőleves vendéglő. Their menu is pretty outstanding and unique. If you want something a bit simpler, eat in their outdoor garden next door. They have hammocks hanging around the bar. Friends tell me this place also has the best barbecue in Budapest. 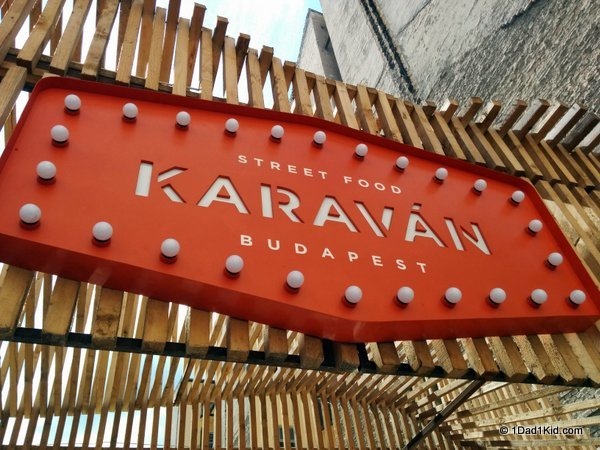 As the food scene matures and evolves in Budapest, there are some standouts worth visiting. If you like food trucks, head on over to Karavan. The Langos Mashogy truck is pretty good, and the langos dough isn’t fried until you place order, so it’s very fresh. However, if you are in a rush, you may not want to stop here. It can take a while to get your food if they’re busy.

Across from the langos truck is Mangalica és Tarsai truck. They serve meat dishes, sandwiches, pasta, and soups. I haven’t tried their meats, but I did have a sweet potato curry soup that was absolutely delicious. I’ll be going back for sure.

In the same area, you’ll also find a Zing Burger truck. They have the best burgers we’ve had in Budapest.

Kolbice is a rather unique food offering. Basically, they’re small sausages (various meats available, including duck sausage) served in a bread cone with various other ingredients and a flavorful sauce.

No list from me would be complete without telling you about bagels if they’re available. Because I care so deeply about my readers, I undertook the difficult but necessary research to be able to find and recommend the best bagel place in the city. Without a doubt, go to Budapest Bagel and nowhere else. I had the duck liver and pear bagel, and Oh. My. Gawd.

Another good langos place is Retro Palacinta which is located outside the Arany Janos (M3) metro station and had some really wonderful langos. It’s also incredibly cheap. 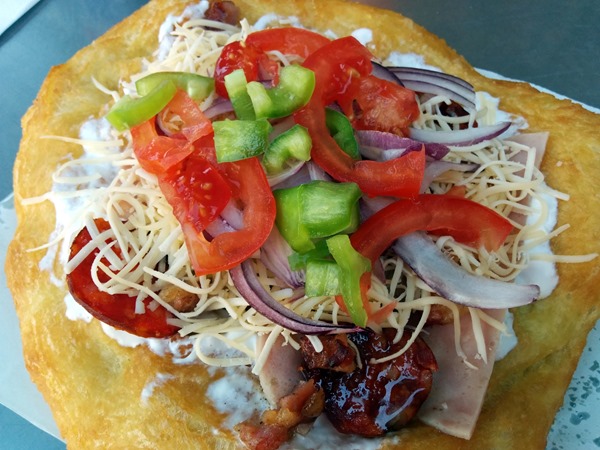 BITE Bakery is a place we’ve ended up visiting semi regularly. They have some really good Cinnabon knockoffs, but we also really like their pretzels—pizza or bacon. They’re a bit on the pricey side for bakery items but not overly so.

If you love a good sandwich, then I highly recommend Meat & Sauce. We’ve tried various items from their menu and have not been disappointed. The meat is very good quality and the sauces are fantastic. I loved their onion rings which have a tempura batter, and the roast duck breast salad was very yummy. It is one of the very few places that has earned a 10 from Tigger. 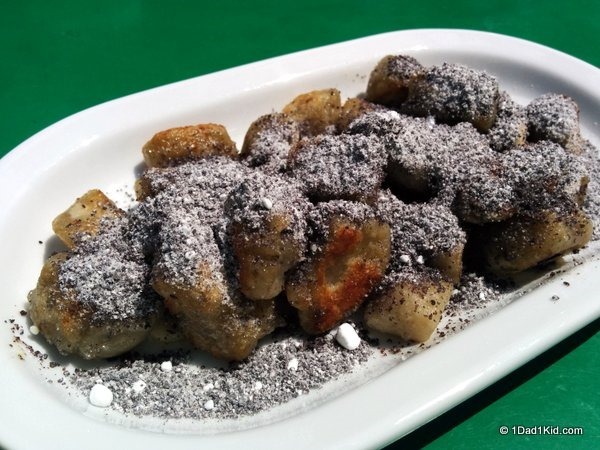 Ricci’s World Jewish Street Food is a great stop for sandwiches, soup, and other similar items. The name is a bit misleading as most of the food really isn’t Jewish. The restaurant really serves more of a fusion cuisine with some of it being inspired by Jewish Hungarian food. They have plenty of outdoor seating with a nice beer garden in the back. 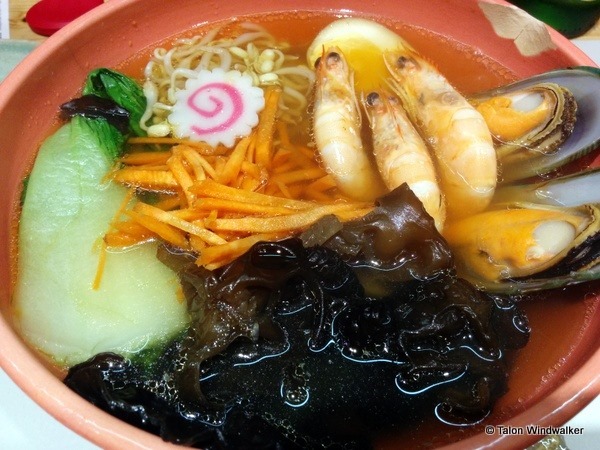 I’m always on the lookout for things like Thai food and other ethnic cuisine when we travel.

Hai Nam Pho Bistro is located on the Buda side of the city. The food was spectacular. Most of the staff are Vietnamese, and the food is very similar to what we had while in Vietnam. The pho was huge and delicious. Tips: They don’t accept credit cards, and they also don’t accept tips. As in we left money, and they specifically came to us as we exited to return the money and inform us of their policy.

Since we were here a year ago, more pho and Vietnamese places have sprung up, so I’ll be trying them out. 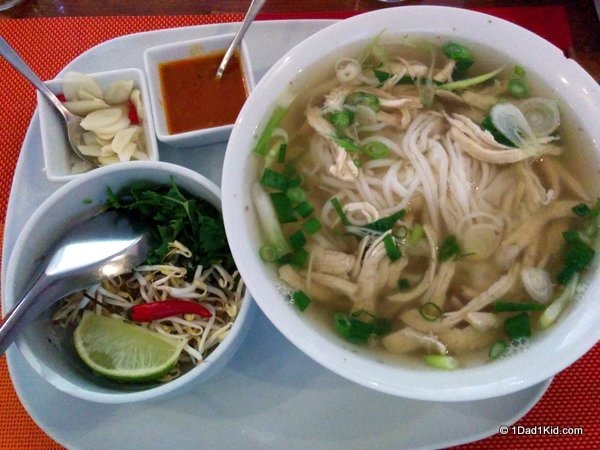 For Thai food, visit KisParázs Thai Soup & Wok Bar. It’s a very small restaurant, but the food was really good. It seemed like some of the cook staff were Thai, which is always a plus. I’m very picky about my green curry, and it’s kind of my standard test of a Thai place. I had been in Thailand just a few months prior, and the curry they served here was very close to what I had in Bangkok. The only bummer is they don’t serve Thai iced tea. They also do home delivery!

If you’re a ramen fan, head over to Ramenka. The prices are a bit more moderate, but the serving size is pretty huge. Their gyoza are probably the best I’ve ever had. Service can be a bit on the surly side, but that’s really pretty typical customer service in central and eastern Europe.

If you’re craving some good jambalaya or American-style BBQ, head over to Soul Food. They offer other types of food as well, and Tigger says their burger is the best of the non-chain (i.e., TGI Friday’s) ones.

If you need a Mexican food (Southwest or Tex-Mex in the US) fix, there are a lot of options. So far Mucho Burrito located in the WestEnd mall holds the crown. It’s probably a good thing they don’t deliver. For other types of Mexican fare, I haven’t had any real strong winners so am still investigating.

There are several options for a Sunday brunch in Budapest. Unfortunately, we didn’t get to try many of them. However, we did go to Hemingway Etterem on the Buda side, and it was a great experience. I was rather impressed with their offerings, and if you’re there during nice weather, the terrace is absolutely wonderful for eating.

They usually put up a small bouncy castle, and there is a playroom for kids, so it’s definitely a family-friendly place. Having said that, though, if you have finicky eaters, they probably won’t enjoy it as much. The buffet is much more gourmet, although they may have special offerings for smaller kids. Tigger no longer qualifies for the children’s menu.

We had a few standout places for gelato. One is the chain Levendula. Their flavors are quite unique, and the flavor was amazing. It is very creamy and refreshing. We stopped in because we routinely saw long lines out of their shops. The lines move quickly, so don’t let that stop you.

Bar Pharma is an eatery and bar; however, during the summer they also offer spectacular gelato, some of which is alcohol infused. For the booze lovers, I recommend the Quincy which contains palinka (but tastes much better). Their nonalcoholic chocolate was dark chocolate and was delicious.

Another good stop is Pearl Icebar. Like the above, their gelato is handmade locally and often is made from that day’s fresh ingredients. They have some really unique flavors which make a visit worthwhile. If you’re low-carbing it, get their paleo lemonade. It was great! They can be hard to find on Google Maps by their name. Their address is Lónyay utca 3. They are very close to Central Market. 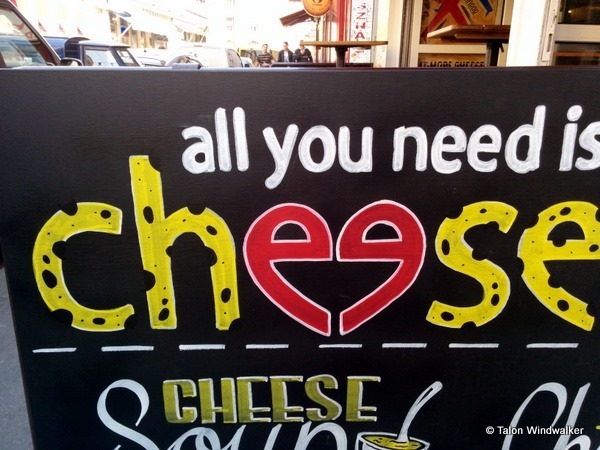 So far the best coffee I’ve had in Budapest was at Blue Bird Roastery. They have a cafe in the touristy Gozsdu Udvar area, but I go to their roastery located at Rumbach Sebestyén u. 12. If you’re looking for a place to relax with their coffee, the roastery may not be your choice. It’s a bit . . . rough around the edges and doesn’t have a lot of space. However, if you go next door to Printa, you’ll have a better atmosphere and their coffee comes from the roastery. Note: The roastery is closed on Saturday and for Jewish holidays.

Last but not least, I’d like to recommend the Zoo Cafe. You don’t come here for the food, although they do serve some decent ice cream sundaes. Enjoy a Nutella latte while getting up close and personal with various critters like a chinchilla, chameleons, snakes, birds, cats, guinea pigs, etc.

There are a couple of cat cafes in the city, but this place was much better in my opinion.

Food time in Budapest is a happy time. You’ll find great cuisine made with fresh products at low prices. That’s a combination I love.

Have you been here? Do you have any Budapest restaurant or food recommendations?