Exploring the city’s Jewish history was one of my big interests for coming here. My maternal ancestry is composed of Hungarian Romani Jews (yes, quite the combination). Walking through the city’s Jewish quarter gives me a sense of connection I don’t often feel with my Jewish roots. Jewish food also brings back rare positive memories of childhood, and there aren’t a lot of places offering an abundance of those choices.

While reviewing available food tours, I came across Taste Hungary’s Jewish culture and cuisine tour, and I was very excited about it. They offered to host me (Tigger wasn’t interested) for this tour, and I really looked forward to it. 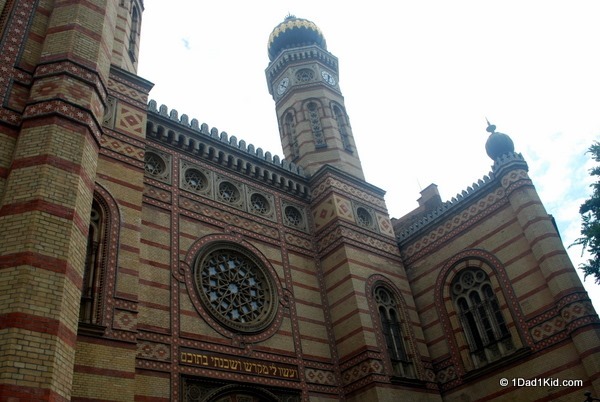 The tour begins next to the 2nd largest synagogue in the world (and it holds the #1 spot for Europe)—Dohány Street Synagogue, also aptly known as The Great Synagogue. This tour doesn’t enter the building, but you do learn quite a lot about the building, the area, and its history.

I had been in this area a few times and never knew that the curve in the road represents the edge of the old wall that protected the city in its medieval days. Like most European cities, Jews weren’t allowed to live within the walls, so their community built up on the edge.

We also visited the Rumbach Synagogue which is no longer in use. It has a very unique interior, and our guide Gyorgy was able to verbally rebuild it for us. It was quite fascinating to learn about its history and the potential plans for its future. 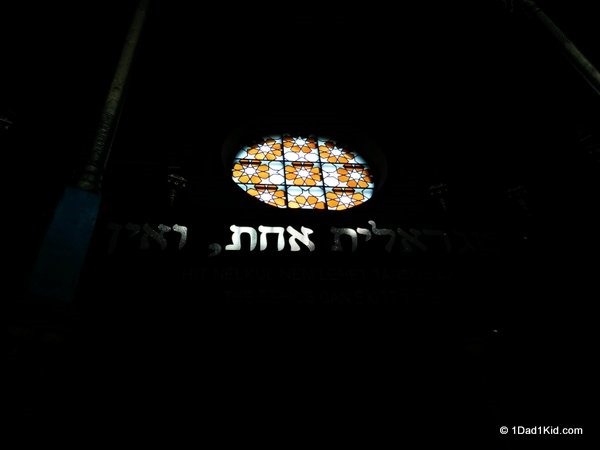 Toward the end of the tour, we also stopped at the Kazinczy Orthodox synagogue. The outside is understated enough that when you enter your eyes go wide in surprise. It is more colorful than most synagogues I’ve visited. It was built in the early 1900s and its interior is an absolute work of beauty and was hand painted. 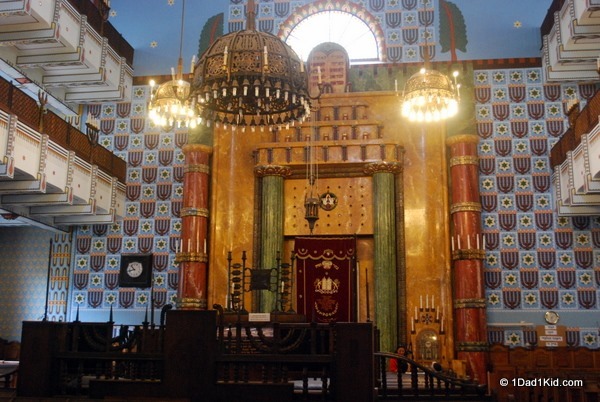 The Jewish district (also known as District VII) is filled with memorials.  One in particular has a very unique appearance and pays homage to a man who definitely meets the definition of hero—Carl Lutz.

Mr. Lutz was a chancellor for the Swiss consulate in Hungary during World War II. He used his authority to purchase places for safe houses and declared them as annexes of the Swiss legislation, thereby giving them protection from the Nazi & Hungarian forces.

He arranged for papers for many Jewish families so they could escape Hungary. His actions are credited with having saved over 62,000 Jews, about half of the Jewish population.

When forces were shooting Jews at the banks of the Danube, he jumped into the river to save a woman who had been injured but was still alive. As he pulled her from the water, he declared she was protected by Switzerland, placed her in his car and escaped. 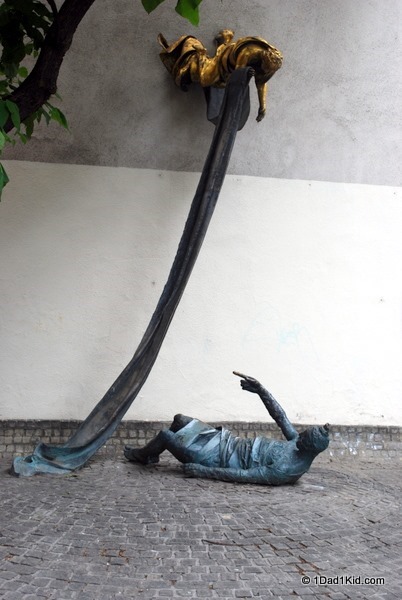 Not all art found within the district is restricted to Jewish history. There are also some really interesting murals.

Food is a big part of a culture and that definitely holds true for the Jewish culture. The practice of Judaism has many flavors, and those get translated into unique ways at eateries.

The walking tour discusses various historical spots and ties it into the modern day. Naturally, you can’t do this without adding in some eating. You won’t finish this tour hungry, trust me.

If you’re new to Jewish culture and food, this will be a great introduction for you. We had everything from matzo ball soup ( a Jewish food staple), dumplings sprinkled with poppyseed and powdered sugar, to csirke paprikas (paprika chicken), roast goose, and Flódni. 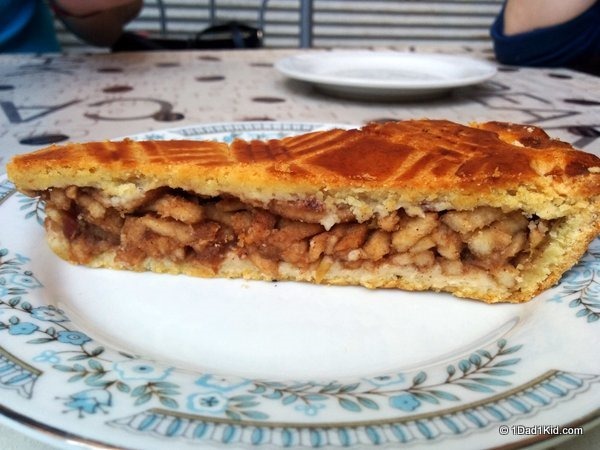 What is Flódni you ask? Well, it’s a traditional Hungarian Jewish cake containing layers of poppyseed, plum jam, apples, and walnuts. Someone commented on my Instagram account that it basically sounded like “sugar lasagna.” Not a wholly inappropriate label.

One of my favorite stops was a restaurant I wouldn’t have known about otherwise. It’s a small operation but extremely popular with locals. This place has been in operation since the 1950s, and its most junior staff has been working there for 18 years. Our server has been there for 30!

It doesn’t look like much from the outside (you probably wouldn’t even realize it’s a restaurant) but inside it boasts a family diner atmosphere and the food was incredibly delicious. When you come to Budapest, make sure to stop at Kádár Étkezde for a delightful meal. Just be aware that they usually close for most of July and at least part of August for vacation.

The tour ends at the Tasting Table shop where you can sample some great Hungarian wines and pálinka (a type of fruit brandy). The latter is a bit of an acquired taste. Just don’t try to drink it too fast and don’t underestimate its strength.

As I rode the tram back home, I reflected on how connected I felt with my roots. Experiencing the history of the Jewish district and eating some of the foods that transported me back to my grandmother’s kitchen table, as well as experiencing some new culinary treats, easily put a smile on my face and made me love Budapest even more.

I definitely recommend this tour to anyone visiting Budapest, even if you don’t have a connection with Jewish culture and/or cuisine. For me it was one of the highlights of our time here, and it gives one a very interesting glimpse into the history of this exquisite city.

Have you experienced Jewish cuisine before? What is your favorite dish?