Vienna is a city full of history and culture. On the surface, it may seem like it doesn’t have much to entertain the little ones, but you just might be surprised. This list is by no means exhaustive. It just includes the activities and places we enjoyed the most.

On the grounds of the Schönbrunn Palace resides the Tiergarten. It is open 365 days a year, which is pretty great considering how Vienna almost completely shuts down on Sundays and holidays. We really liked the exhibits, which for the most part seemed to give the animals plenty of space while still allowing ease of viewing. Tigger had been wanting to see a panda, and he was able to realize that wish here.

The zoo is large, so make sure to plan accordingly when timing your visit.

While there are some new exhibits, they have worked hard to maintain the old-world feel of the original zoo, which is something I really enjoyed.

There is a great playground for little children as well.

If you’re riding the metro to visit the zoo, get off at the Heizing station. That one is closer than the Schonbrunn station. 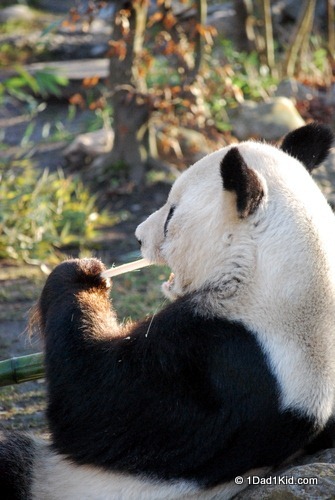 The Haus des Meeres is a combination aquarium, reptile house, and small zoo. It bills itself as an Aqua Terra Zoo. It is located in a former air raid shelter which is an impressive 12 stories tall. While the building is butt ugly quite plain on the outside, it’s quite a bit more attractive indoors.

We took the elevator to the highest floor it serviced and used the stairs to work our way down. The elevator takes forever, so this is really the best way to go.

We were a bit disappointed with the shark exhibit. They are very young sharks so quite small still.

The rest of the exhibits were fairly interesting, though. I was especially impressed with the transparent ant colony. There are glass pipes going throughout some of the exhibits. You can watch the leafcutter ants walking throughout the colony structure. It’s really quite creative.

The marine life exhibits were enjoyable. In the very large tank, we were able to see a sea turtle swimming around. When it rested on the sea bed, a remora came up and attached itself to its shell. We’ve seen them swimming in the ocean, attached and unattached, but this was my first time being able to see exactly how they connect to their customer. It was pretty cool to watch.

The zoo part doesn’t have a lot of animal exhibits, as you might assume. However, it’s really a fun area as there is a group of monkeys and they are free roaming. They are a lot of fun to watch, and they are pretty comfortable with the presence of humans. Don’t worry, they aren’t like some monkey encounters you may have read about. They aren’t going to jump onto you, steal anything, etc.

There are some play and activity areas for small children.

I would say it’s fair to plan on at least 1-1/2 hours for a visit. With younger kids, you’ll probably spend more time there.

If you visit during school holidays, you’ll want to arrive at the aquarium before 10:30 AM. The lines and crowds get huge after that.

The famous Naschmarkt is an easy walk from here and a great place to pick up lunch after your visit.

This museum is absolutely amazing, and it is located in the heart of the old district, very close to the big and famous sites of Vienna. The interior of the museum is so gorgeous and ornate I initially thought it was a renovated palace. I was quite surprised to learn that was not the case. It was built and designed to be a museum! The emperor was a serious collector, and it shows. 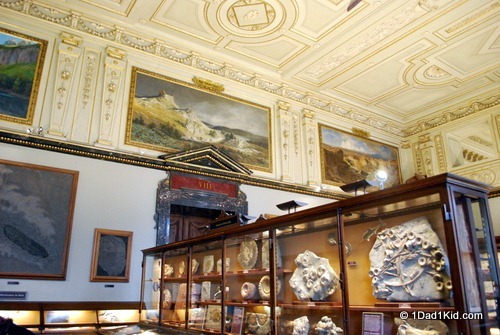 Some of the specimens in this collection are hundreds of years old. I’m not talking about the dinosaur fossils either. This Japanese snow crab specimen is about 160 years old and was a gift from the emperor of Japan. 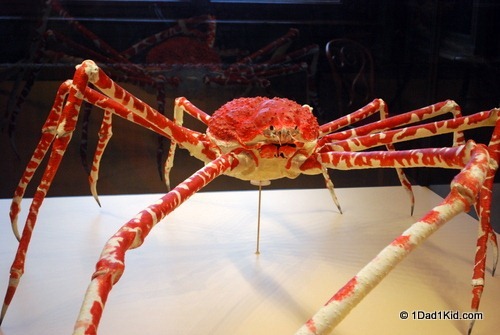 A visit here takes some time, especially for the adults, because you won’t just be looking at the exhibits but also the decor on the walls and ceilings, the carved doors, and so on. There are also several interactive exhibits.

I was really quite blown away by this museum, and Tigger enjoyed it as well.

One of the things that will put a smile on a parent’s face is admission is free for children under 19. Adults are 10 EUR. The museum is closed on Tuesdays and some holidays. It is easily accessed by metro and by walking from other sites in the downtown area.

Prater has multiple places to visit as well as rides for pretty much every level of bravery.

One of the big attractions is the giant Ferris wheel. It was built in 1897 and is somewhat unique in its design. It offers a great 360-degree view of the city along with diagrams to help you identify the various buildings. At night some of the cars become a revolving dining event. 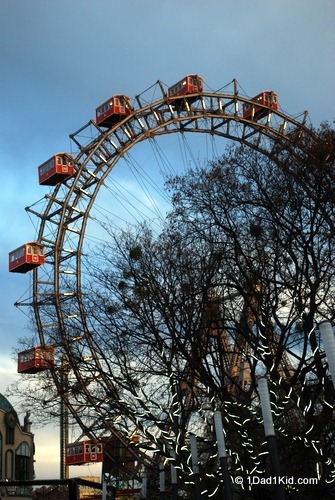 Madame Tussauds is here, along with roller coasters and another larger Ferris wheel in case you need something a bit more adrenaline producing.

On the grounds you will also find a planetarium.

During the holiday season, they host a small Christmas market.

It’s really a lot of fun. You can get here quite easily via the metro. When exiting the train, just follow the Ferris wheel symbol (a circle with a triangle at its base). The park is across the street from the station.

While I wouldn’t really recommend a tour of the palace, they do have a rather fun children’s museum that is quite interactive.

The grounds themselves are quite extensive, and there is no admission to simply walk the grounds. You will find people riding their bikes, rollerblading, jogging, etc., all over the place. So, it’s a great place for the kids to just have a great time running around. 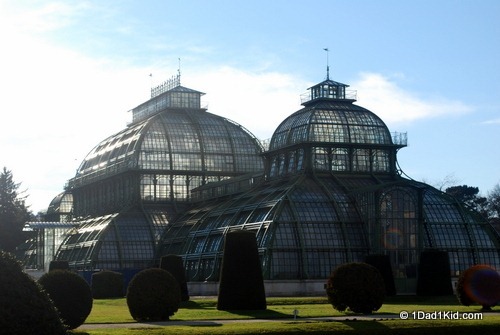 The solarium and other areas can be quite enjoyable, too.

During warmer weather, there is an outdoor maze, great gardens, fountains, and a playground for kids. During the summer, you can enjoy the large public swimming pool.

There is really so much to do in Vienna you shouldn’t be concerned your kids will be bored.

What are your favorite places to visit in Vienna with children?