Visiting Albufeira in the Algarve

When we were nearing the end of our house sit in the UK, I was looking at airfares to try to decide where to go next. I noticed some very reasonable prices heading to the Algarve region of Portugal, an area I heard a lot about. During my search for some good deals for an apartment or hotel, I came upon Albufeira and decided to check it out. 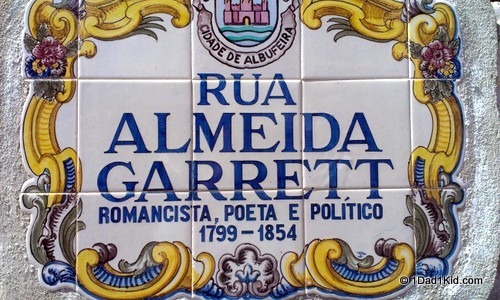 On our first day walking around, we instantly loved this town. Most of the tourists were located around the area known as The Strip, so it was easy enough to find areas with more locals. We visited during Semana Santa, the week before Easter. Typically, traveling in Catholic countries during this time of year can be rough as it’s a peak travel time for the locals. I was rather surprised, but relieved, we didn’t have issues finding a place.

Albufeira has a very Mediterranean feel to it and is quite laidback. Unless their team wins the football championship in which case things get loud. I’m sure you can guess how I know this. Congrats to them by the way.

One doesn’t come to this city looking for culture, though. The area has adapted significantly to its steady swarm of British visitors. I found it challenging to find places serving Portuguese food, and whenever I heard someone speaking Portuguese outside of a place like a supermarket, it stood out because of how unusual it was.

I quickly decided it was just easier to accept this was the case and try to find the area’s hidden charm.

One of the city’s strongest features is its people. The locals were incredibly friendly, warm, and helpful. It wasn’t hard to get a big smile out of them. Almost everyone spoke English, and those who didn’t were very patient in working through the communication gap. 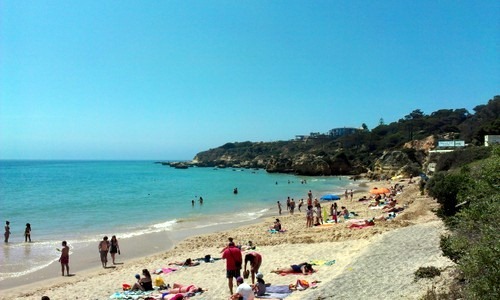 While you may not come here for culture, it’s easily understandable what draws people to this area. There are some rather beautiful beaches here. The Portuguese are a hardy group. The water temperature was 17ºC/62ºF, and the air temperature was only a few degrees higher, yet they were frolicking in the water like it was the middle of summer. Tigger barely lasted 30 minutes on our first beach visit. The second time he dipped his toes into the water and quickly decided he wasn’t going to be swimming.

Albufeira has a bunch of different beaches. Some are quite small and others sprawling. They seem to each have their own character as well. It’s really worth doing some beach hopping.

Taxis aren’t horribly expensive, but they definitely aren’t cheap either. There is a bus system called Giro. There are a few lines, and each line does a different loop around and among the city. Don’t expect to find a timetable at the stops, though. Someone has thankfully created a website that does a good job of explaining and diagramming the routes as well as giving you an idea of the bus schedule. Even though no official schedule is published, their site was spot on most of the time. If you plan on taking the bus, their site will your best friend.

There are also regional buses going to the many cities and small villages in the Algarve region. Fares are pretty reasonable, and the buses are comfortable. You can find their schedules and fares on the same website.

To make things easy, all buses go through the main bus station where the regional buses are located. One line also passes by the train station.

When looking at heading to other parts of Portugal, you have a bunch of options, including some decent airfares. Train travel is pretty good, though. Train fares are fairly reasonable, and it’s pretty easy to get around the country this way.

From what I’ve seen, often the train is cheaper, and of course faster, than buses. Something I greatly appreciate since I much prefer trains to buses. 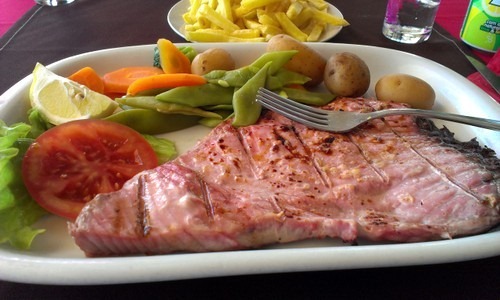 I was really underwhelmed by the places we ate at in Albufeira, but there were a few places worth a mention.

A couple of locals sent us to Restaurante Tamariz when I asked for a good place serving typical Portuguese food for locals. They have a decent menu, and the grilled fillet of tuna I ordered was monstrous. Prices are, unfortunately, on par with the tourist restaurants.

Roberto’s Chicken piri-piri was a welcome find one day while we were walking around aimlessly. It is outside The Strip and tucked away in a mostly residential area. Their menu has a lot more to it than just chicken, and we were quite pleased with the food. The prices are much more reasonable, and you can find some interesting items like octopus salad. If you have kids, or are a big kid yourself, they have a nice play area that includes a trampoline. You can find it on Rua Jornal A Avezinha as part of the roundabout. It’s a large building with a large sign so you can’t miss it.

There are a plethora of Chinese (and other Asian) restaurants around town. We were looking for a good spot and noticed that Happy House had really good reviews. We decided to check it out and were quite pleased. In fact, we ended up eating there twice in the same week! They offer a nice buffet, but you can also order from a menu. I was rather impressed with the buffet, though. At €10.26 (about $14.21) per person (children 10 and under get a discount), it isn’t exactly a budget stop but was good. 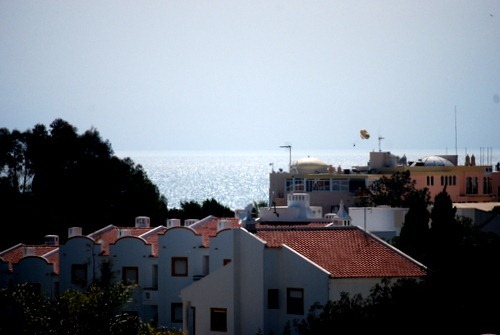 We used a mix of hotel and apartment rental. We stayed at Hotel Topazio for our first few days. Among their various types of rooms are 1-bedroom apartments with a small kitchen and refrigerator. It’s in a pretty good location, close to the beach, and it was pretty relaxing there. The apartments also have nice terraces. We could see the ocean in the distance from our room, so I was pretty happy about that.

After the hotel, we moved into an AirBnB apartment. This is in a family-owned apartment building, and the owners were absolutely great to work with. It’s close to The Strip but removed enough that you can relax more easily, and there are far fewer tourists in this area. The Giro blue line passes by here which was an extra bonus. This is the apartment we stayed in, but they have several others.

This is not a bustling city. Most people coming here are looking to relax and spend some time on the beach. Most activities will take you outside Albufeira. There are several agencies selling day trips not only around the region but to places like Seville and Gibraltar, and they were rather decently priced. For example, one bus tour to Gibraltar was €25 per person.

A car rental would be really great to have in this region. There are some beautiful views, and you’ll probably be able to see a lot more. Seville is about a 2-hour drive.

The nearest international airport is in Faro. You can easily travel between the two cities by shuttle, bus, and train. Because we were landing after midnight, we ended up using a shuttle transfer which provided service directly to our door. They offer different tiers of service. I chose the cheapest and wish I had upgraded to the minivan that guarantees no more than 4 stops. Had we done this, we would’ve gone directly to our hotel. If you’re arriving early in the day and haven’t been on a long flight, the bus option would be just fine. After arriving at the airport at 1 AM after several hours of travel, though, I just wanted to get into bed.

The Algarve region is really a great area to explore. Even though there was little in the way of things to do and see in Albufeira, we ended up staying for two weeks and easily could’ve stayed longer. It’s a great town with a wonderful vibe.

Have you been to Albufeira or another city in the region? What was your favorite area?