Things to do in Edinburgh

Home » Scotland » Things to do in Edinburgh

One of the many things I love about this city is that there are so many things to do in Edinburgh, and they’re all relatively close and easy to get to. It’s a pedestrian-friendly city and also has some nice bike paths and routes, including special bicycle stopping zones at red lights. There’s just so much to love about Edinburgh!

These are free in the city, and they have some rather impressive ones from the investigating I did. My son is a bit “museumed out,” so we didn’t visit any while we were there. However, I spoke with several locals to get ideas of places to possibly visit, and they all suggested some of the same ones. 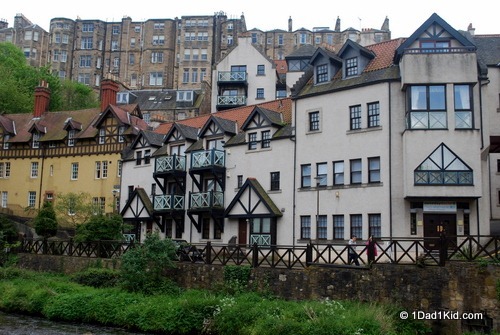 Edinburgh is a city of festivals with the Fringe Festival being the most famous. It is reportedly the largest arts festival in the world. Essentially, during the month of August the entire city becomes a live theatre (music, dance, performance, etc.). The number of various performances is rather mind boggling, and the festival attracts some rather big names in the entertainment industry. Some of them use the festival to launch their next big project.

Summertime is the most active period for events, but you can find them occurring in the spring and fall as well, and the wild new year celebration known as Hogmanay is becoming more and more well known. 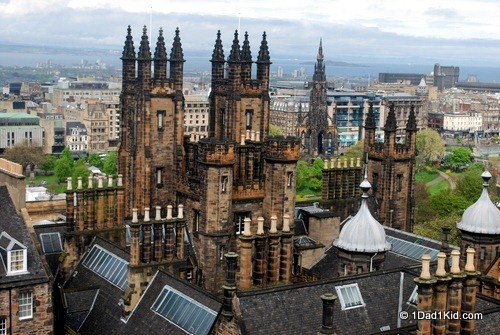 Unique things to do in Edinburgh

While looking through Google, I came across a place known as Camera Obscura and World of Illusions. I contacted them, and we were invited to come check it out as their guests.

On the surface it seemed like a cool activity, but I was blown away by their exhibits. Something I thought would mostly be of interest to my almost teenager actually turned out to be equally fun for me. Our time there turned out to be one of the highlights of our visit to Edinburgh. It’s a must-do activity in my book. Tigger gave it a 10/10 as well.

The camera obscura was the first paid attraction in Scotland and dates back to 1853. At one point it was used as a social experiment to show the wealthy the startling difference between the classes. It was the first “moving picture” people had ever seen during its earlier days, and it understandably created quite a stir. It’s rumored that some people fainted, and some even vomited, upon seeing a demonstration of the camera.

While the camera obscura is interesting to see in action, the other levels of the building are packed full of all kinds of illusions, most of which involve hands-on interaction. In addition to fun experiments, there is also a vector tunnel and a fun maze of mirrors.

Fun with perspective. Both objects are actually the same size! 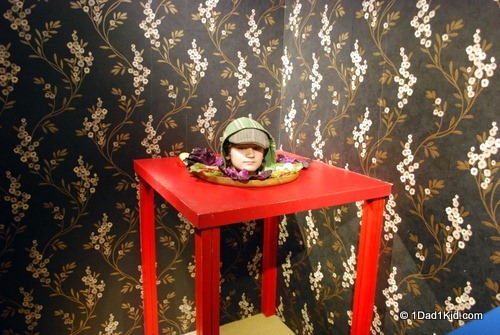 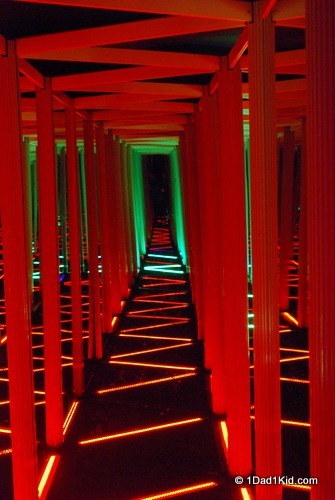 One of the things I loved as well were the staff. It’s rare to see people who seem to love their jobs so much. Every staff member we engaged with appeared to be having as much fun being there as we were. That makes a big difference to the experience.

Unfortunately, if you have significant mobility issues, you won’t really be able to enjoy this unusual experience. There is no elevator in the building.

While walking around the historic town, make sure to watch the street performers and explore some of the side streets and alleys. Many of them open up to some lovely discoveries.

There are tons of monuments in Edinburgh. One of the more interesting ones is the National Monument of Scotland at the top of Calton Hill. This area is quite fabulous, and the monument only adds to its grandeur. The monument was built at a time when architecture was inspired by the Greek style, which is readily apparent. There are some less grand monuments at the top, as well as an observatory and an art gallery. The views from the hill are phenomenal and provide an amazing 360-degree panorama of Edinburgh and its surroundings, including the iconic hill Arthur’s Seat.

The park around the monument is absolutely perfect for having a picnic, a romantic date, letting the kids burn off energy, and so on. Its proximity to other historic buildings and Princes and High Streets really adds to its appeal.

For those with mobility issues, there is a very nice road that leads up to the top that offers complete wheelchair accessibility.

Another monument worth visiting is the Scott Monument, the world’s largest monument to a writer. It looks like a gothic rocket. In addition to being an impressive monument and a feast for the eyes of fans of this type of architecture, you can actually climb the inside of the monument.

There are 287 narrow steps leading to the top, which affords some great views. You’ll also find a museum room so you can learn more about the writer and the monument.

Edinburgh Castle is a hard sight to miss from most of the center of town. It sits atop a hill in the city and is a fairly large structure. In addition to being an old fort, it hosts many museums dealing with the city’s and country’s history. One can also view the Honours of Scotland—the scepter, crown, and sword used to anoint the monarch, as well as the Stone of Destiny upon which the monarch sat as they were presented the Honours. It’s kind of cool to see them. Unfortunately, photos aren’t allowed in this area.

A visit to the castle is fairly expensive. An adult will pay around $27 USD, and children ages 5-15 are $16 each. And that’s if you buy the tickets online, which I highly recommend doing if you decide to visit. If you do purchase tickets online, select the pickup option to save some hassle of trying to get them printed. The ticket machine takes seconds.

I can’t really recommend a visit to the castle, though. It really isn’t very impressive other than seeing the Honours, and I really can’t say that’s worth paying $27 per adult. 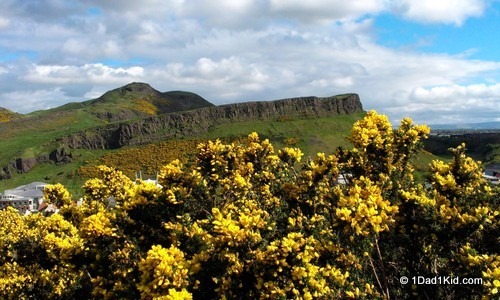 Arthur’s Seat, which makes up part of Holyrood Park, is quite impressive and offers some great hiking. There is a diversity of trails. The area is easily reached by public transportation.

The city is packed full of absolutely gorgeous parks, and there are some phenomenal urban walking and cycling trails that will help you forget you’re in an energetic city. We walked part of the Water of Leith Walkway, and it was absolutely fantastic.

There are audio tracks you can download to listen to as you enjoy the walk. You’ll find numbered signs along the path to help you find the right track. It’s such a cool idea. 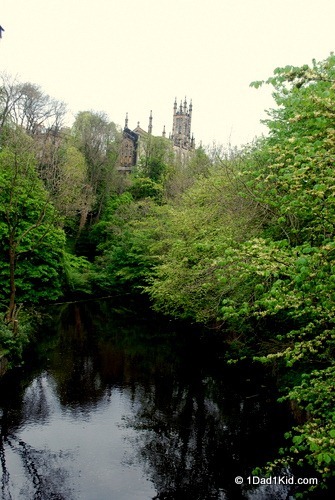 This isn’t the only pathway in the city, but it also takes you to the Royal Botanic Garden Edinburgh which is another park that shouldn’t be missed. The gardens are absolutely stunning, especially in spring and summer. And they’re free.

In good weather, you can enjoy the beach, and if you’re hardy there is canoeing and kayaking year round.

There is are so many outdoor opportunities in this wonderful city, there is even a website dedicated to the Edinburgh Outdoors.

With so many things to do in Edinburgh, I hope you plan on more than just a few days for your visit. And if Edinburgh wasn’t on your itinerary before, I hope you’ve changed your mind.

What’s your favorite spot to visit in Edinburgh?