We’ve both been interested in visiting Brussels for quite a while. As it can be a pricey place to visit, we had held off, though. Then a house sitting opportunity came up, and we went for it. We arrived at an odd time in Brussels, but it was interesting to see how the city and people responded. We were there for about 3 weeks, which would definitely be too long for just a visit.

We began our journey to Brussels from Milan, Italy. Blacklane had offered to work with us again, so we had a couple of private transfers—to the airport in Milan and from the Charlesroi airport in Brussels to our house sit in Brussels. I gotta say it’s so nice to have someone pick you up from your hotel or airport and get you to your location. Especially if you have an early morning flight or are arriving at your destination later in the day.

Since we were arriving a couple of days after the terror attacks, it was even better to have a private transfer as there was a fair amount of chaos at the airport from the enhanced security measures.

Our first impression of Brussels was that for the most part it’s a really clean city. Our place was close to several embassies, the European Union (EU) Council’s headquarters, and the office of the presidency of the EU, so we had lots of sirens (from diplomatic escorts). Other than that, it’s really a pretty quiet place.

We were also located across the street from the grand mosque. While I do enjoy hearing the call to prayer, I don’t enjoy the early morning ones. Thankfully, they don’t broadcast the calls. On one Friday, they did have speakers going outdoors for the worshippers who couldn’t be indoors (due to crowding), and it was enjoyable to hear the prayers. He had a beautiful voice.

For our first few days in Brussels, we were on a mission: Eat frites (Belgian fries are the original ones), chocolate, and waffles, and I wanted to sample some Belgian beers.

Frites were the first things we crossed off our list, and now I totally get the obsession with them. Belgian fries are thick cut, fried for a short time, and are fried again (in beef fat, sorry vegetarians) right before serving. This results in a nice crispy exterior with a soft inside. They are absolutely delicious, and I’m not embarrassed to admit that we had them as meals a couple of times. 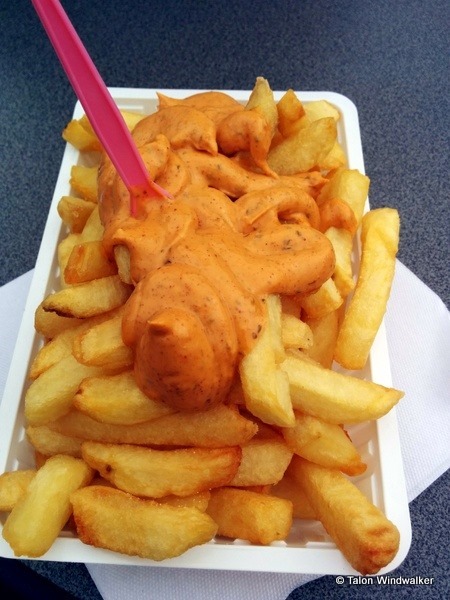 Waffles and a little boy peeing

We went to see the iconic Manneken Pis because we had been told the shops around there had good waffles.

The waffles weren’t as impressive to me. They were good, but not a big deal really. During our 3 weeks, we had them prepared in a variety of ways, including with toppings and without. They are made from dough rather than batter, so they are quite a bit more dense than what we usually have in the US.

Don’t plan on eating a meal shortly after one of these. 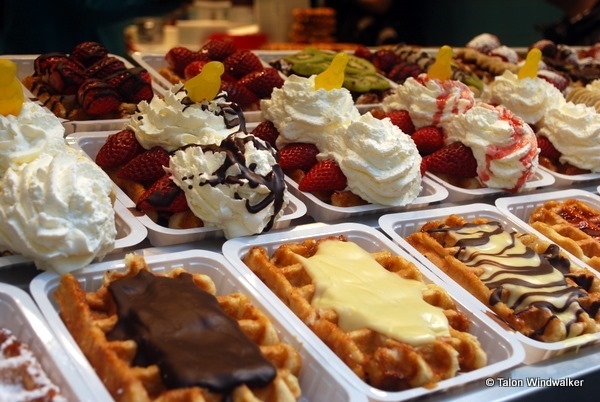 The famous fountain was a bit of surprise, too. I expected the statue of the little boy to be much taller (it’s about 2 feet tall). They often dress him up in different outfits, and I learned that he actually has over 800 costumes!

There are various legends about why he’s an icon, but my favorite one was that it commemorates the time when someone had taken a little boy to the battlefield. As they engaged the enemy, someone put him up in a tree. As the soldiers advanced, he began peeing on them from the tree. This event led to Belgium’s victory.

Occasionally, they’ll also hook the fountain up to beer kegs and pass around cups of the brew as it . . . is dispensed from the fountain.

The fountain is easy to spot as you approach. Just look for the crowd of people on the corner.

These experiments were outstanding. I did a bit of beer sampling prior to doing the fabulous chocolate and beer tour, and I’m still trying out Belgian beers from outside the country. They are so darn good!

It seems all of Belgium is quite proud of their chocolate, and I can’t blame them. There is a chocolate shop seemingly on every single corner.  Out of the various places we visited, Frederic Blondeel, was by far the best.

For beer, I’m quite partial to the Trappist ones, but there are so many incredibly good ones. You could probably drink a beer daily for over a year and still not have tried all the various brands.

Beer branding is often done by the glass. So certain beers are served in specific glasses. Some of them are quite unique, including one that is shaped like an animal’s horn and is served in a special stand to hold it upright. When you think about it, it’s actually a good marketing tool. In a pub if you look around and only see clear glasses being used, you don’t really know which beer people are drinking. This way you can glance across the room and notice who is drinking what in case you’re interested in knowing which beer is more popular. 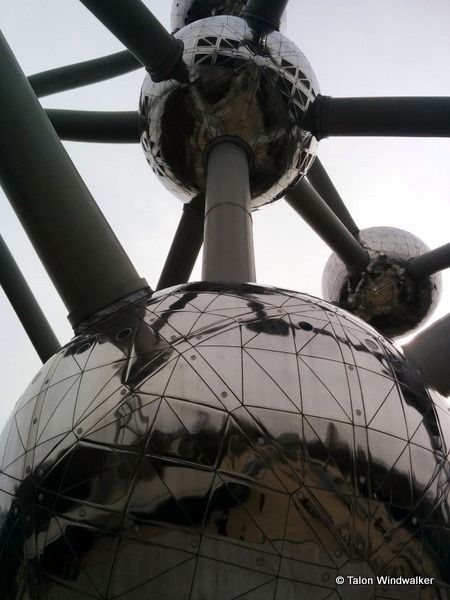 This is another icon of the city. It definitely has a very unique look to it. It was built as the main pavilion of the World Fair in 1958.  If you visit, you can go inside many of the spheres where there are various exhibits.

We visited as guests, and I’m so glad we didn’t pay for entrance tickets. I hate to say it, but we both felt like it was one of the lamest attractions we’ve ever been to. Tigger said: “If you’re really bored or looking for something kind of relaxed to do, it’s a good place for some history.”

A couple of notes if you decide to go: 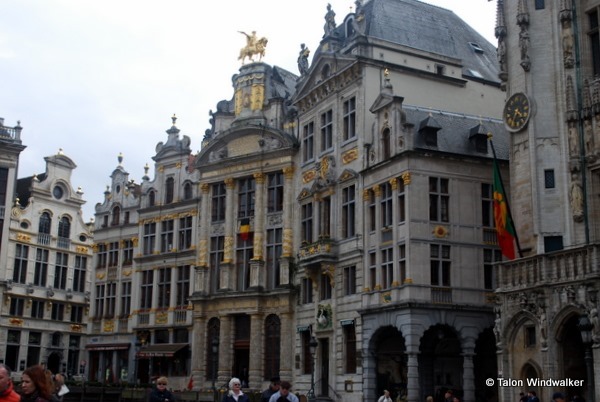 This location is tourist central, but it’s worth a visit if you like architecture and history. The buildings that surround the square are pretty spectacular. One of the more ornate buildings looks like a cathedral, but it’s actually the historic town hall. The square dates back to the 13th century.

This is quite a nice park, and it’s home to some interesting sights as well. You can find the Great Mosque which is also the Islamic and Cultural Centre of Belgium.

Toward the center of the park, you’ll find the triumphal arc, the Royal Military Museum (which looked pretty interesting), the AutoWorld Museum, and the Temple of Human Passions (which is only open during the summer). 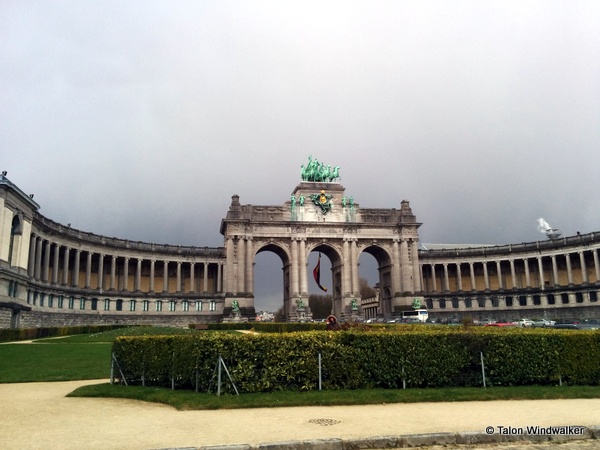 This is only open to the public during the summer (late July to early September). If you’re walking around the historic area of Brussels, though, it isn’t a far walk if you just want to see the outside. It’s quite lovely.

If you’re a fan of music, I’ve been told by several people that this museum is a great one to visit. You’re given headphones to wear so that when you are looking at different instruments you can hear its music. We didn’t go as Tigger is kind of “over” museums unless they’re extremely hands-on.

Brussels has a good public transportation system. Unfortunately, it isn’t very cheap (almost $2.40 USD per trip at today’s exchange rate). If you want to buy a pass or economic package of tickets, you need the MOBIB card which costs 5 EUR (one-time fee, reusable).

When using the transportation system, keep in mind you have to validate your ticket for each segment of the journey. For example, if you take the metro and transfer to a bus, you’ll need to validate it at the metro station and again as you board the bus.

You can buy a ticket on board the bus, but it’s more expensive, and I’m not sure they give change. I once handed a driver a fiver and asked for 1 ticket (both in French and while holding up my index finger), and he handed me back 2 tickets instead. So if you’re going this route, it’s better to have exact change (2.5€) just in case.

How much time should I plan on staying in Brussels?

This is rare for me to say, especially when it comes to a big city, but 2-3 days is more than enough in my opinion. Most people I know, including Belgians, recommend going to Ghent instead of Brussels. We didn’t make it there, but when even the locals are saying to go elsewhere. . .

Make sure to leave time for at least a day trip to Bruges, though. It’s touristy, but it’s definitely worth it in my opinion. Tigger really liked it as well. I’ll be writing about Bruges separately.

Have you spent time in Brussels? What were your favorite parts?