I grew up when “keeping up with the Joneses” was very much a part of someone’s life. Every decision parents and grandparents made seemed to be based on how it would be perceived by other people in their apartment building, other family members, and so on. Guess what parents: It isn’t about you! 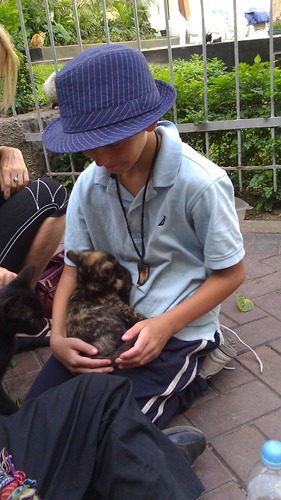 One of my first big parenting challenges came when a young man moved in with me. He was having lots of issues at home with his stepfather, and his mother decided it would be better for him to live with me where he could be supported and respected more.

As you can probably imagine, I’m not the strictest parent. Yes, I have limits and boundaries like anyone else, but generally speaking I prefer to create an atmosphere in my home that encourages discussion, open conversations, and mutual respect. I don’t have rules just to have them, and I explain to my kids exactly why we have a rule.

When the teenager informed me he wanted to dye his hair blue, I had an immediate twinge. “What would people at church think?” which was naturally quickly followed by “What will people think of me?” I’m not a fan of being stared at, and walking around with a 6-foot-tall Native American with blue hair is going to certainly elicit some stares.

But I decided it wasn’t about me. We bought the dye, and I joined him at his friend’s house, who had decided to go green, and watched the boys strip their brown hair and transform it into colors that don’t exist in nature. Except, perhaps, on a peacock. But the birds pull it off better.

I nicknamed the boys “Smurf” and “Boogerhead.”

The stares definitely came. The church was a more conservative one, and he was denied the ability to participate in some church roles because his azure locks did not personify “quiet dignity.”

When he later began looking for a job and discovered that having hair that was bluer than the sky was impeding his search, the brown hair returned.

When another child in my home, dressed in a pair of jeans that essentially had no fabric covering the knees, I caught myself. When I was his age, one did not go to school dressed that way. You would look like a hobo, and everyone would think that your parents were awful for letting you leave the house looking like that.

I had already been on the receiving end of so many condescending comments from well-meaning teachers at school who figured, ya know, us single guys are really incapable of some things and therefore need to be explained about “proper clothing” for various conditions. I knew I would get a phone call or an email later that day. It’s not about me, I told myself and responded with: “Would you like me to patch those holes in your pants?”

My heart sank just a little, but I just smiled and shrugged. The same way I did when he wanted to wear a hoodie with food stains versus the nice, clean one hanging in his closet. (“You know, it’s so important for his self-esteem to wear clean clothes.” Tell that to him. He chose to wear it in spite of my pointing out the stains.) Or when he wore a dark blue sock on one foot and a gleaming white one on the other. 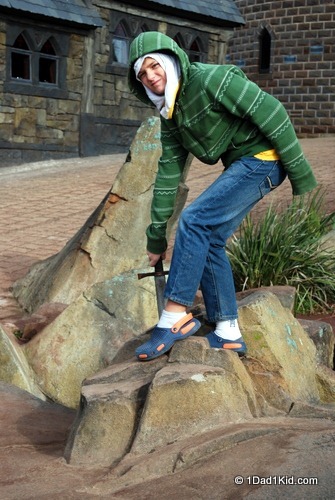 Tigger has his own sense of style. Generally speaking, his choices don’t faze me. But I’ve caught myself a couple of times ready to respond like “one of those parents.” Especially when he decides to wear his balaclava he got from go-karting in Indonesia. To me it looks incredibly silly, and he does indeed get many stares.

In reality, though, who the hell cares? If he doesn’t care that people look at him funny, why should I?

It’s not about me.

I’d rather he grow up with, and retain, his current care-free spirit (“I don’t want to be normal. I like being weird.”) than to live his life according to the dictates of others. Weird hats, crazy hairstyles, clothes with holes and obvious stains. . . what does it really matter in the long run? He’s compassionate, helpful, caring, thoughtful, and a lot of fun. I’ll take that over “normal” any day.