Our Time in Perugia

Home » Italy » Our Time in Perugia

When we were planning on leaving Romania for a few days to restart Tigger’s visa (before we discovered they were once again being picky about the 90 days out of 180 rule), I was looking at cheap airfares and found one to Perugia, Italy. As it isn’t a place I see mentioned a lot, I figured why not?

Our first introduction to Perugia wasn’t . . . shall we say exactly smooth? The border control process took quite a bit of time as they had a whopping single officer working. He wasn’t the brightest bulb in the pack, either. 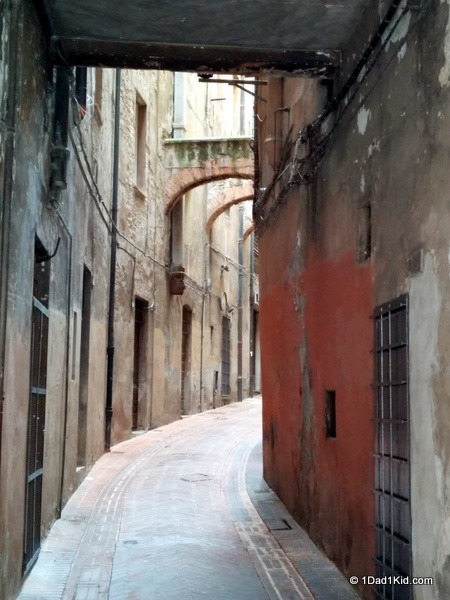 Getting into and around Perugia

We had a bit of a surprise when we discovered there are no taxis waiting at the airport (contrary to what our Airbnb host had told us). Instead there is a big sign with the phone numbers to call. We arrived too late to be able to catch a bus, so we were in a bit of a quandry, especially since I hadn’t paid for roaming service for my phone, so I couldn’t use it in Italy.

Incidentally, a taxi from the airport into Perugia is 30€ (flat rate). You might want to try to schedule one in advance, but I can’t promise that it works. The locals I spoke to weren’t too reassuring either: “Well, you can always try . . . “

Supposedly you can find them outside the airport, but the person who told me that also insisted taxis would be waiting at the terminal.

The bus system is pretty good, though. I compared the schedule information in Google Maps with the official schedule, and Google was very accurate.

If you’re staying in the historical section, the whole area is very walkable, and really it’s quite a treat. The old town is extremely photogenic and quaint.

Visiting the historical area of the town is definitely like stepping into the past. The outer wall of the city is from the Middle Ages with the internal structures dating from the 4th and 3rd centuries BCE. The Arco Etrusco (Etruscan Arch) is the largest of the 7 entry gates into the city and was built during the 3rd century BCE. We walked through it several times as our Airbnb place was just down the street, and each time we passed through I felt like I discovered something new about it.

During one of our strolls, we came across a tower and a plain-appearing round church. Curiosity got the better of me, and we went inside the church. I couldn’t help but say “Wow!” aloud. The church is from the 5th and 6th centuries, and the columns were part of the original pagan temple that stood on that spot.

The neighboring tower is known as Cassero Porta Sant’Angelo. Admission into the tower, which you can climb and also houses a small museum, is 3€ and includes admission into 2 other museums in Perugia. The church is free to enter.

There are plenty of interesting and beautiful ancient gates around the city, and it’s fun to find them.

For us, walking around the old town was the main event. If you aren’t interested in exploring, Perugia really isn’t worth visiting. Its real charm lies in its architecture, the walls, the neighborhoods, etc.

Other Things to Do in Perugia

There are many museums, workshops, and exhibits to experience.

Perugia is also home to the famous Baci chocolate. Perugian chocolate is naturally quite popular here, and you will find plenty of chocolate shops all over the place. You can tour the Perugina Chocolate Factory as well as take classes there.

Keep in mind that tours and classes are not conducted frequently during the off season and can fill up quickly in the busy season, so make sure to check their online schedule, and making a reservation wouldn’t be a bad idea.

As is common with many old cities, there is another city beneath the actively inhabited one. There are tours available, but you can explore them on your own. In fact, if you end up taking some escalators to lower points in the hilly city, you will often pass through the ruins. They are surprisingly intact, and if you’re visiting during summer, you can escape the heat by spending time in the underground city.

Perugia is also a city of festivals and markets, and some of these markets are delightfully random. 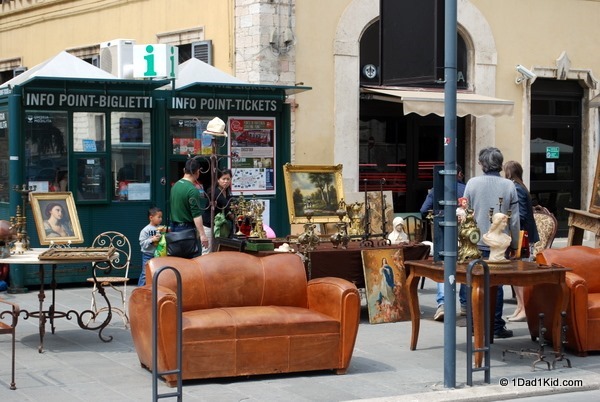 We found food to be fairly reasonable. There are lots of places that sell pizza by the slice. We spent around 12 EUR for 5 big slices of pizza, a small fruit salad, a beer and a bottle of soda at one of the smaller shops located outside the arch.

There is also a sizable Chinese community in Perugia, so you can find pretty good Chinese food rather easily if you’re looking for something different.

If you plan on using the bus system, you can buy tickets at the tobacco shops (look for a sign with a big T) for a little cheaper than if you buy them on the bus. Make sure to validate your ticket once on the bus, even if you got yours from the driver.

If you’re leaving/arriving by train, the bus is a very cost effective way of getting to the central train station. It takes about 15 minutes to get there from the stops near the Etruscan Arch.

There are several wine bars, as you can imagine, in the town, and often during “happy hour” they will have a special aperitivos offering. You will find lots of delicious appetizers (served buffet style and all you can eat), and the fee of around 6-8€ usually includes 1-2 drinks.

If you want a real traditional Perugian treat, go to the roasted pork stand located in Piazza Giacomo Matteotti. This stand has been in operation since about 1916. 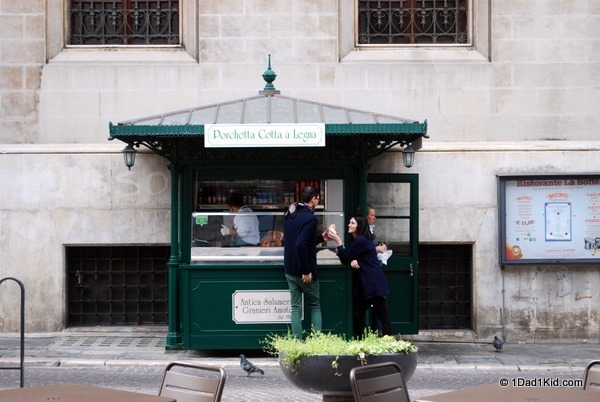 If you need a snack or drink while walking around, keep an eye out for the vending machine stations. You can buy almost anything there. The hot vending machine will heat your food right before it delivers it to you (look at the display above the keypad which counts down the time until you can open the door to retrieve your purchase). Items cost around 1 to 1.5€.

Some machines vend interesting items like calculators, pencils, shampoo, and even pregnancy tests.

Many of the markets close fairly early. However, the stores that have a sign saying “alimentare” are usually open until quite late and on holidays and Sundays. They’re pretty well stocked with things and often have good produce as well.

We found that most places accept credit/debit cards, even many of the alimentare stores. Almost every cafe or restaurant also has free WiFi. ATMs offer multiple languages.

We spent 3 days in Perugia, and I would say that is about the right amount of time. You can certainly see the major sights within 1 day, but if you can stay longer I’d recommend it.

Have you been to Perugia? What was your favorite sight or activity?