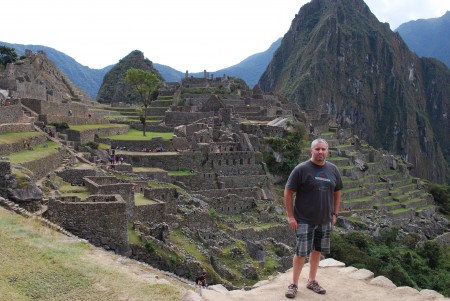 After enduring a delayed flight to LAX causing me to have to run through several terminals to get to the international one, arriving after the computer system was locked out for my flight (but supervisor was kind enough to allow me to check-in anyway) and being told that most likely my bags would not be joining me when I arrived in Lima, then flying all night long, by the time I got to the window in the Lima airport so I could pay my airport tax I was exhausted. And the prospect of a 6-hour wait for my ongoing flight to Cusco was not filling me with extra energy.

While waiting for my change, I spotted a uniformed person watching me out of the corner of my eye. All I had was a backpack since LAX loved my baggage so much they decided to send it on the next flight.  I wondered what on earth I was doing that was so interesting to this official.

The cashier handed me my proof of payment, and I asked for directions for my next stop. As I headed to the stairs, the gentleman stepped in front of me with a clipboard. If you’ve been to malls in the US, this usually means someone is trying to get you to fill out a survey. I held my eyes in place so that if they rolled I wouldn’t offend the very nice person with a badge and a large baton. He handed me the clipboard. I skimmed it rapidly and realized I was to be checked to make sure I wasn’t smuggling drugs. No problem. I have 6 hours to kill and a small backpack. Knock yourself out, dude. I smiled, said OK, and followed him with an amused grin on my face. All part of the adventure, right?

We entered a room with a device that I had seen quite a lot of on TV back home. I looked at his desk with its 2 black flat screen monitors, one of which looked awfully similar to the ones used to review CAT scan images. Yes, I was about to be body scanned. The US news was currently ablaze over the images produced by these scanners, and now I was going to have the privilege of experiencing it first hand.

Now, I’m no prude. And with my . . . body habitus, if you want to see a naked image of me, well, go for it. Better that than getting groped by some guy who won’t even be buying me dinner or drinks afterward. Don’t you think if you’re going to get groped, we should at least have the ability to pick the person who is going to be goosing us?

However, now I was a little more tentative. I was in a windowless room with no other witnesses. No one else had seen me go with this guy who looked like he was wearing a military uniform. I still wasn’t sure why I needed to be scanned, and the paperwork, which was also in English, didn’t help much. Couldn’t I just lift up my shirt, empty out my pockets, remove my shoes?

The very polite and pleasant officer guided me to the futuristic-looking machine and gave me directions. I was to turn my head with my arms at my side. I almost asked if he wanted me to cough, but I think the humor would’ve been lost in the moment. Then lickety split we were done.

He was so proud, too. “We got this from your country!” he said with a huge grin as he proudly pointed at one of the monitors. I glanced over and did a double take. Understanding began to dawn on me as I viewed not only my naked body but also my organs. My layers of . . . adipose tissue looked even less appealing on the computer screen.

His pudgy finger jabbed at the screen as he pointed to my large intestine. “You have gas, but no drugs.” Best. Line. Ever. Admit it!  I fought the feeling to suddenly put on several more layers of clothes by checking out the image of my lungs. Yep, all clear. Good.

Gas, but no drugs. And no pneumonia or congestion either.