I’ve been wanting a wearable activity tracker for a long time. They’re great motivators to keep you moving and can give you some really great insights if you’re trying to improve or maintain your fitness and health status. As we prepared to return to the US, I began researching the different devices. After reading a gazillion reviews, I finally settled on one. I’ve had it for a bit now and decided to do a Jawbone UP review.

Why did I choose the Jawbone UP?

When I was a much larger person, I dealt with obstructive sleep apnea. After losing a lot of weight, I no longer have need for a CPAP machine. However, I know that even a slight fluctuation upward in my weight can bring back symptoms. Because of this, and the fact that I frequently deal with insomnia thanks to writer’s brain, one of the things that has really intrigued me about these devices is their ability to monitor your sleep and give you feedback.

The Jawbone UP is rated fairly highly for its accuracy, and the app software really stood out for me. Every review I read pointed to the Jawbone info being more useful. 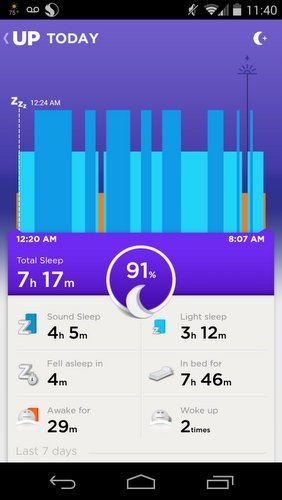 I love the amount of information I get in just one screen. Some of the devices don’t track the time it took you to fall asleep. That’s information I want. One could use this info to help figure out if certain foods are interfering with falling asleep, for example. Falling asleep can be one of my biggest challenges, so it’s very useful for me to be able to track this time and be able to compare it across several days.

You are able to set up a reminder to get you moving if you’ve been sitting too long. I have mine set for one hour. If the band hasn’t detected much activity within the time you set, it will vibrate to remind you to get off your tush. As I spend a good amount of time on my rear end while using the computer, I find this feature to be pretty valuable. Only a few trackers offered this function.

Some of the reviews of different devices included problems with clasps functioning, the band not being big enough, etc. I didn’t encounter any reviews of issues with this device. I have large wrists, so this was a concern. The band fits my wrist quite comfortably and stays on easily. As you can see in the photo above, I even have room to spare, but it doesn’t slide around when I’m moving my arms.

You can’t wear it when you go swimming, but the only devices I found that were waterproof didn’t have all the functionality or were more than twice as expensive as the Jawbone. The other downside with those trackers was how they measured the intensity of a swimming activity—they just don’t track swimming well. In view of that, I’m fine with removing it to go for a swim.

I wanted to get the red band, but I found this one in Costco for a lot cheaper. Budget wins over fashion for me these days.

I don’t know if it’s my age or a drastically slowed-down lifestyle, but I’m finally able to take naps. The problem is I need a specific amount of time or I feel like crap for the rest of the day. If I get too much, I have a hard time falling asleep that night.

The Jawbone can be switched to a power nap mode that works within a customizable timeframe. By monitoring your sleep, the wristband will vibrate to wake you up at the optimal point within the range you set. There are plenty of studies that have confirmed the health, memory, and performance benefits of taking power naps. This device really adds some value since it’s using your sleep cycle to determine when to wake you.

This is another feature that wasn’t common among the trackers. You can set the time you need to be awakened along with a window of time before that. The band will wake you at the optimum point in your sleep cycle which helps you feel a bit more refreshed when you awake. It’s also nice for people who are sharing a room and/or a bed since the band vibrates rather than emitting an annoying noise that will bug the other person/people around you (most trackers offered the vibration alarm, but not the smart alarm to figure out when is best to wake you).

With the Jawbone app, you can take photos or input information about your meals, snacks, and drinks to help keep track of calories and nutrition. When you do this, the app combines your sleep, activity, and nutrition info to come up with tips to help you improve your health, your sleep, etc.

When you check the app on your phone, you’ll find tips that are based on the information it’s been tracking for you or just general tips on small things you can do that can make a big difference in your efforts. 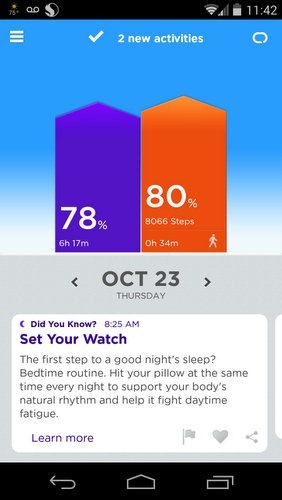 After doing extensive research and deciding on the Jawbone UP, I had to make a decision between getting the UP or the UP24. The latter connects with your phone via Bluetooth. The UP has to be physically plugged into your phone to sync information. I really wanted the UP24 so that information was more instant, and I could interface automatically with the band.

There is a about a $50 price difference between the two devices, and I had been considering if that extra money was worth it. That is until I walked into Costco and saw that they had the UP on sale for $49. The price difference now changed to $80. I had purchased my Costco membership via a Living Social deal, and as part of that deal I was given a $20 Costco Cash card. I was now looking at spending $29 versus $129.

This is what we call a no-brainer.

It’s very easy to connect the band to a phone. The larger silver-colored cap is removed, and there is a plug that you insert into the headphone port of your phone. Once you launch the application, it automatically syncs with the band and updates your info. You leave them connected if you’re changing any of the alarms so that it can program the band accordingly.

Charging is pretty easy. The device comes with a small cord that connects your band to your computer via a USB port. The battery needs recharging around every 9-10 days, and you can easily see how much charge it has via the app. There are optional chargers you can buy if you wish to utilize a different system for charging.

I don’t usually wear anything on my hands or wrists when I sleep, so I was a bit concerned the band would be a little annoying at nighttime, but it really wasn’t. It’s very comfortable. It also has enough of a low profile that it doesn’t really bother me when I’m typing on the keyboard. I don’t wear a watch when I’m on my laptop because of the interference, but the Jawbone is no problem.

I’ve done a variety of activities while wearing the device, and it’s been a breeze. I like not having to remember to grab a pedometer or use an app on my phone, esp since I don’t have an unlimited data plan, to track my activities. It has really helped motivate me to get moving more as well. I find I get competitive with myself and start looking at moving more, parking farther away from the store, etc., so that the lines on the activity graph are longer. 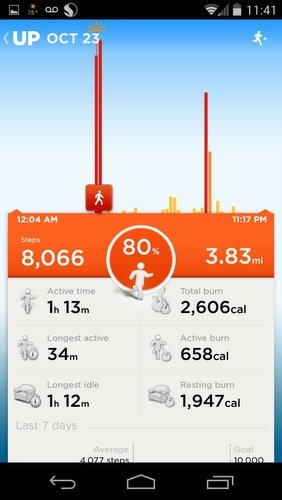 A lot of little things can add up to some big benefits.

The sleep tracker has been very helpful. I can tell I’m likely not having apnea issues because the graph shows me deep sleep, light sleep, and awake periods. I used to be a bit concerned because I wake up 2-3 times a night, and I wondered how much that was affecting my sleep and if I was waking more than I realized. However, I can tell how many times I wake up during the night and that I reenter deep sleep fairly rapidly. I felt like my periods of wakefulness were really long, but I discovered I’m only awake for a total of around 25-29 minutes. So now I don’t worry about that stuff.

I’ve also made some changes to what I eat later at night based on the information I’ve been able to analyze. The sleep tracker and power nap alarm have been worth it alone.

The app is able to connect with other fitness and health apps easily.

I definitely recommend this device. I had compared the FitBit, Nike Fuel, Garmin Vivofit and Vivosmart, Misfit Shrine, as well as some others during my research before deciding on the Jawbone UP, and I definitely think I picked the right one.

I was quite interested in the Garmin Vivosmart, but it was hard to justify the price tag. It is sure packed with some cool features, though. I think it will appeal a bit more to techies, gadget lovers, and people who feel the need to be extra connected (it will show you text messages and emails from your phone, who is calling you, and stuff like that). In addition to the much higher price tag and really not wanting the extra bells and whistles, it also lacks the power nap functionality and didn’t offer the level of information the Jawbone does.

I hope my Jawbone UP review helps you figure out which tracker to go with if you’ve been contemplating making a purchase. I spent a LOT of time researching them before selecting the Jawbone. Hopefully, I’ve saved you some time and money.

Do you use a activity tracker? Which features are your favorite?