I “met” this young man with a very promising future through his father who is a member of a Facebook traveling families group. After his dad shared some of his photos, I kept commenting that he needed a better venue to showcase his work, and they asked if I would like to show some of Kole’s photography on my site. That required no thought.

Kole did a project of Faces of Turkey, and he introduces you to some of that work in this post. He also has some exceptional landscape and architecture photography.

Check out this teenager’s work, and I think you’ll agree with me he’s going places.

My name is Kole Purdy and I am a 17-year-old photographer. My family of six is currently traveling the world for nine months. We are in month six right now. So far we have been to (in order) Hawaii, New Zealand, Indonesia, Thailand, Cambodia, Vietnam, Turkey, Greece, and Italy. As you could imagine, being a photographer with this type of opportunity is absolutely amazing. After a 20-year career in sales, my dad was in a comfortable job but not happy.  My parents had saved money and wanted to ‘live now’. It was just a matter of figuring out how in the world (literally) do we do this? A few months later, we were gone. I couldn’t be any more thankful for this big adventure. It is like an enormous candyland of photographic opportunity, not to mention the life changing experiences and realizations that I have had so far.

While my family and I were in Turkey I decided to do a personal photo project. I wanted to attempt to capture the essence of the Turkish culture. It was fun learning how to approach complete strangers in a foreign country that did not speak my language and get-up close and intimate portraits. Every time I saw an interesting face in a good photographic setting, I would approach them and attempt to convey the fact that I wanted to take their photograph. I know very little Turkish so ‘conveying’ the fact that I wanted to photograph them was a task in and of itself. Generally, it involved me pointing at my camera, nodding, smiling incessantly, and gibbering a bit of Turkish. I imagine that I came across a little weird or maybe even creepy at times, but I’d say it was worth it. I even got rudely rejected four or five times.

One such experience took place at the famous Sultan Ahmet (more commonly know as The Blue Mosque) in Istanbul. I approached this elder Turkish man that was peacefully feeding birds directly in front of the mosque. I had high hopes for this guy. He was feeding birds so how unfriendly could he be? After I walked up to him, he was still not acknowledging my presence so I said, “Pardon, fotoğraf lütfen?” which means, “Excuse me, photograph please?” He replied with, “No. Go away. Why would I want my picture taken. Can you not see that I am alone. That is for a reason.” I did not expect this man to be able to speak perfect English nor did I expect his unfriendliness. So after he said that I just said, “Alright, enjoy your time sir, sorry to bother.” and smiled then walked away. 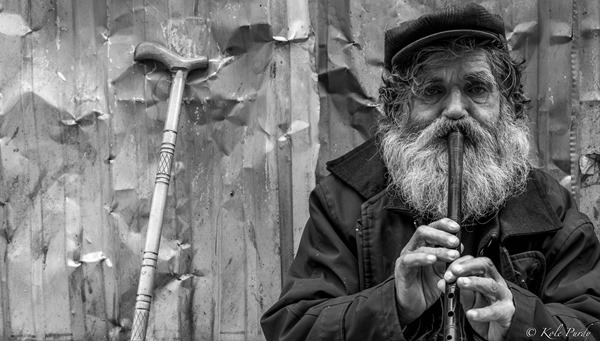 With the exception of that guy and a few others, everyone was friendly. This guy (above) was a street performer playing a flute on a wall. I saw him from the second floor of a restaurant that I was eating at for lunch. After lunch, I approached him. I smiled, pointed at my camera, and he nodded. I took a couple of photos, smiled, and tossed 3 Turkish Lira in his bucket and walked away. 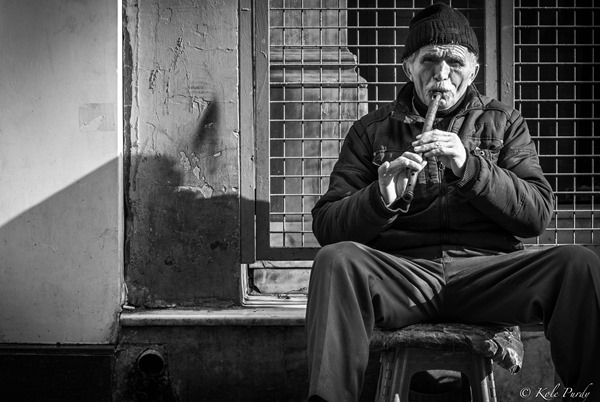 This photo was taken four days after the previous one. I saw him and since the other flute player photo was to my satisfaction, why not try again? I always made sure to tip the performers that I’d photograph as a thank you.

After finishing a 1-hour search, with my dad, for the beloved çig köftë in Istanbul, I captured this photo. The dish -çig köftë- is a traditional Turkish one that is wheat bulgar with various spices, balled up, and served with lettuce and lemon. It is glorious. I highly suggest this dish if you visit Turkey. After I enjoyed my lunch I walked out of the restaurant and saw this man. I had been wanting a photo of someone smoking. I love the look of an old smoker and thought it’d make for a interesting photo. I approached this kind man as I had the others. He was very smiley and asked to see the photo after I was done. He gave me a nod and smile of approval.

This man was the owner of a doner kebap restaurant at the corner of the street we stayed in Istanbul. We saw him every night for our late night doner runs. I didn’t ask him if I could take this picture.. but I’m sure he would’ve been fine with it. He was very nice and gave us a bit of free food over the course of our stay there. 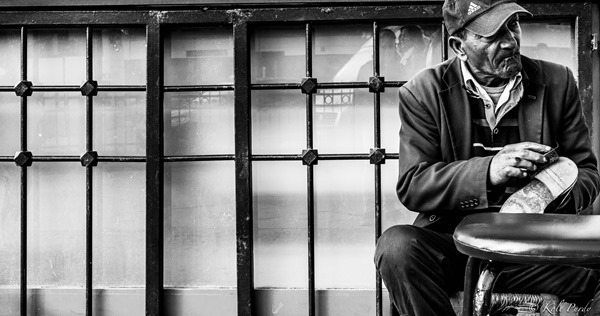 I didn’t get to ask this guy if I could take his photo. I was in a rush to catch a ferry across the Bosphorus that was leaving any minute. I saw the awesome iron fenced pattern in the background and then I saw him. I had to get this picture. With my family running towards the ferry screaming at me to come on and forget the picture, I managed to snap one. I’d say this was worth the ‘risk’. 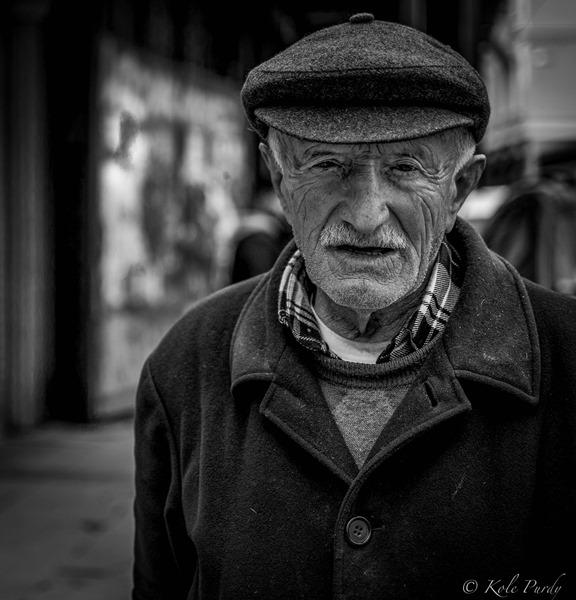 While in Istanbul in the early morning when everyone else was slowly waking up and getting ready for the day, I was out taking pictures. This guy was in one of the back alleyways of Taxim Square. I saw his interesting face and asked him in Turkish if I could take his photo. He was pretty excited I could speak some of his language, he smiled and nodded. He asked to see the photo after I took it. It seemed to make him pretty happy, he said, “çok güzel!” Which means, “very beautiful!” in direct translation. 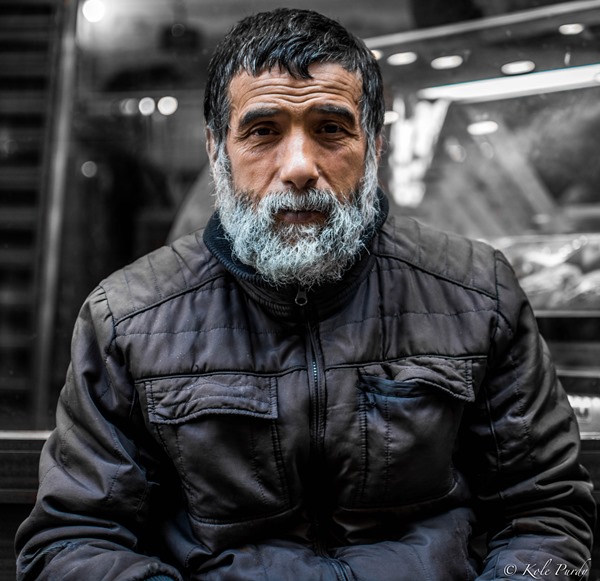 This picture was taken on the same morning that I photographed the man in the last photo. This man was a worker in the fish market just off of Taxim Square. It is actually quite a popular area in Istanbul. You can grab some exceptionally good Midye there too. Midye is the Turkish word for ‘stuffed clam.’ This clam is stuffed with rice, garlic, and some other spices. It is then topped off with some lemon juice, making it five times better. It was and still is my favorite food that I’ve had on this trip so far. 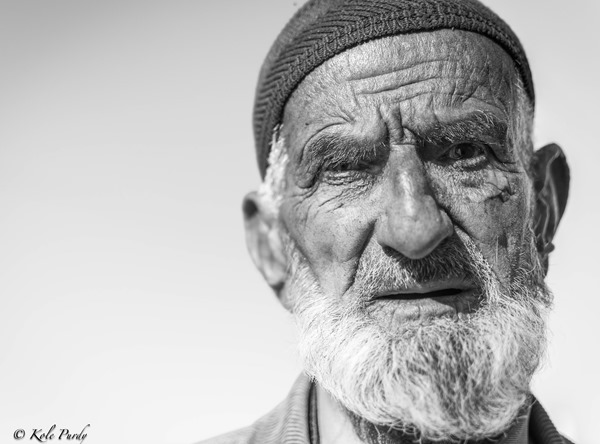 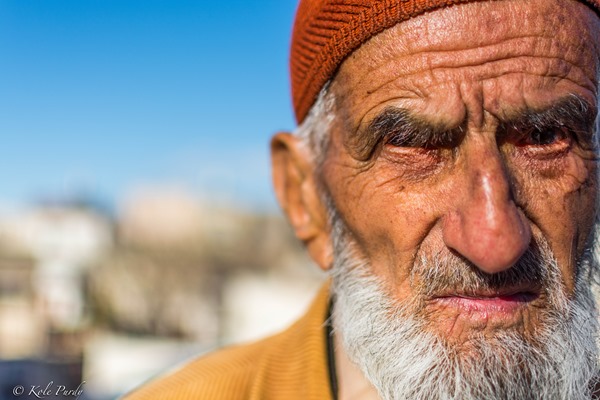 My family and I were riding back through Göreme after a long day of sight seeing. I glanced down an alleyway to see this man walking towards our car. I immediately asked our driver to stop. The man just had such an interesting face, I couldn’t resist. He did not speak English so our driver translated. He was somewhat hesitant to be photographed but I knew the old man’s initial resistance had quickly faded because he patted me on the back and smiled widely. After showing him the photos he enthusiastically said, “çok güzel!”

Once I returned to my hotel I sat down with the owner and shared the photos I had just captured. It turns out that he and the older gentlemen are friends. He placed the older man’s age between 95-100 years old! The owner also told me that in this man’s early teens he met the famous Ataturk. Ataturk is the most idolized figure in all of Turkey’s history. He brought the modernized European culture to Turkey among many other things.

The first day I arrived in Istanbul I was sitting in a cafe enjoying my first ever cup of Turkish coffee before I took this. Across the street there was a man peering through the bars of the fence so I walked over to see what had caught his attention. He was watching kids out at recess on the other side of the wall. I imagine that his child was one of the ones out at recess and that he came to watch him/her. I returned to my coffee but kept watching the man. He finally sat down for a smoke, with the tree perfectly framing him into the picture. I put the camera up to my face and waited for him to look left to give the empty space purpose. Once he did, I pressed the shutter and got this.

This was another one of the photos that I took while out in the morning during my stay in Istanbul. I was looking for a colorful setting that morning. I walked for ten minutes or so before seeing this. I saw hundreds of colorful bags framing this man that was reading behind the counter, it was perfect for what I wanted. I snapped this and was on my way. 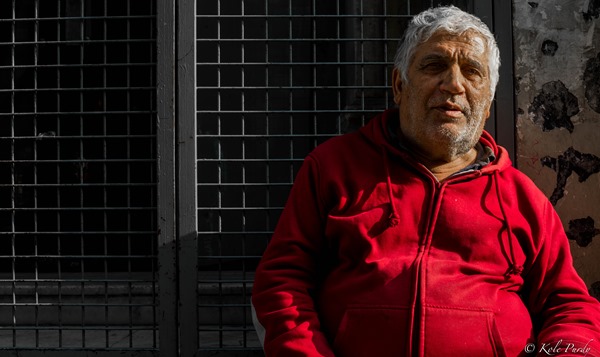 This was the taken the same morning as the last. I was still looking for a colorful subject with contrast against a dark colored wall. I saw the red against the black and grays then approached this man. He was very compliant and didn’t mind me taking his photo at all. 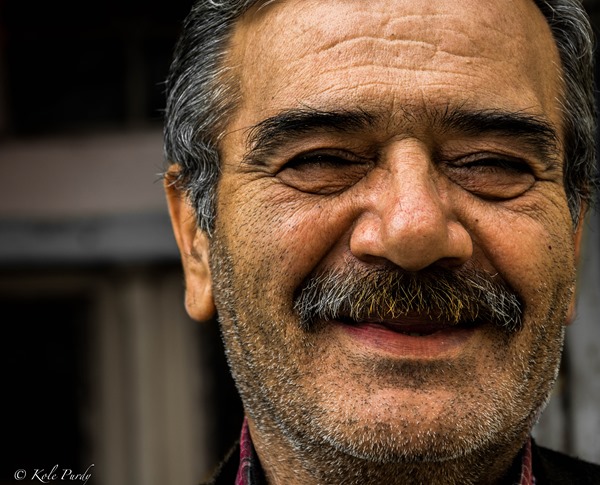 While in Turkey, my family wanted to see the Seven Churches of Revelation. We rented a car and drove all over Turkey seeing these churches. We had just finished seeing one of the churches before this photo was taken and we were loading back into our car. Everyone was packed in to the car and I was looking for a photo outside of the car (as I always am). This man popped out of his home for a smoke. I politely asked if I could take his photo, he was happy to say yes. I took four or five photos and didn’t get anything good really. My mom yelled at me from the car saying, “Come on Kole!!!” This got a big ole’ smile out of him. I raised my camera to my face and captured the moment forever. This was such a happy way to end my project.