I always wanted to be a mom

Home » Parenting/Adoption » I always wanted to be a mom

—This is a guest post by Joy Clein. Joy’s blog is The Clein Times. I met her originally through a Facebook group for long-term traveling families. She ended up editing my book, and when they came through Mexico while we were there, our families were able to spend some time together. I really love her story and was thrilled when she agreed to share it with my readers.

I always wanted to be a mom. I used to think, find guy, get married, have kid, adopt kid, family.

Well, things don’t always work out like we plan. Turned 29, found guy, got married, realized he was the wrong guy, got divorced. No kid, no family.

I finally decided I was ready to go talk to a adoption specialist social worker.

The meeting was enlightening. I realized I didn’t know anything about adoption, and that I had a lot to think about. Age I wanted? Baby, toddler, older child? Sex: male, female? Domestic, international? Open, closed? Questions that I needed to answer, and I had no clue. But I left with many things to think about and started doing some research and heavy thinking.

To make a long story short, after 9 months or so; I ‘decided’ to pursue adopting a toddler boy through international adoption. Great, one decision down, many more left to go (which I didn’t know about).

OK, so I set up another appointment with the social worker. Great, I made a decision. Great, I even picked out an agency. Great, what country? Huh? Yeah, what country, uh.. not really sure, maybe Bulgaria, Guatemala? What countries allow single women to adopt? OK, I will call the agency and talk to someone there.

I call the agency and explain my situation and my thoughts about a boy toddler. The lady suggests China. And I think, did she just hear me say, “I want a boy?” Yep, she heard me. There are boys available for adoption from China. Really? OK, tell me more. Well, There are many boys and girls on a ‘waiting child’ (or special needs) list. So, I’m thinking, OK tell me more. What does that mean? So, she sends me a list of minor special needs, including cleft lip and palate (and more). So, I did some research, thought about it, and decided I was open to a boy toddler with minor medical special needs, including cleft lip and palate.

Fill out the first of MANY forms and applications, and sent it off. And boom, I was in the process of adopting. I was told it would be awhile, 3 months or more until I heard anything, and that I should start getting together the paperwork I would need for the dossier that would eventually be sent to China. Since I figured I had awhile, of course I procrastinated.

Then about 5 weeks later I got a phone call from the agency; they were sending me pictures and information on 2 boys that were available for adoption, both were cleft affected. I’m thinking, “What it’s too soon! What, great! What, 2, you mean I have to pick?!” So, I receive the email and immediately opened up the pictures and printed them out. What, I have to choose? Even though, immediately as I opened the pictures, I knew that I saw my son in the cute little boy with those amazing eyes. 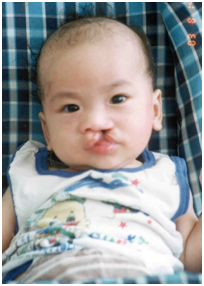 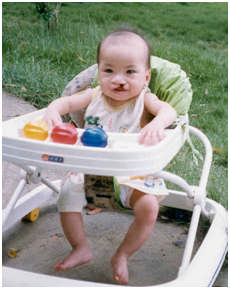 But the other one. I kept thinking about him. Deep down I knew some other family would choose him. I just had to believe that. Of course, I sent the pictures off to my family, and had a physician friend look over the medical paperwork. But my heart was already set. I had finally found my son. Now to get him home.

Such a short phrase. But not an easy task. Of course, since I hadn’t started the paperwork, I was trying to get it done as quickly as possible. Many people might be thinking, how can that be ‘hard’ and take so long. Just ask anyone who has adopted internationally; they know. Each paper has to notarized and authenticated. The home study, the questions, the this, the that. The fedexing here, the fedexing there. And finally it all has to be translated and sent to China.

Now while I am ‘paperchasing,’ I have also already been ‘matched’ with this little boy. So during this whole time I carry his picture with me. This little picture, encouraging me to finish so I can bring him home and start our family. After all the paperwork was finally sent in, I was just waiting to get travel approval. Sure, there are estimates about how long it takes. But they are ‘estimates’ and I am waiting. All that summer, I went to garage sales, and showed everyone the picture of the boy who was to be my son. The boy I was buying clothes for and toys for and little books for. 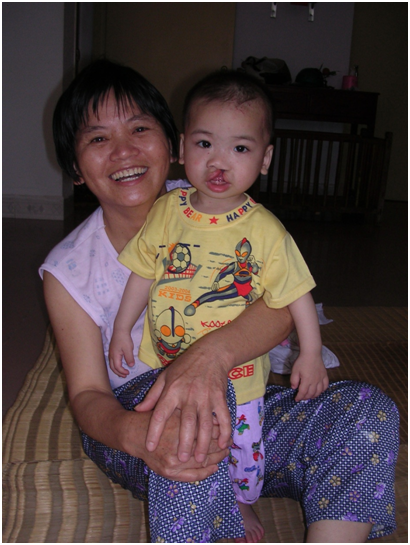 Finally travel approval came. Time to purchase tickets. First fly to Beijing, meet up with some other families who will be adopting the same day, sight-see a little, and meet with the agency people to learn a little too. Great, Beijing was great. The Great Wall of China was great. 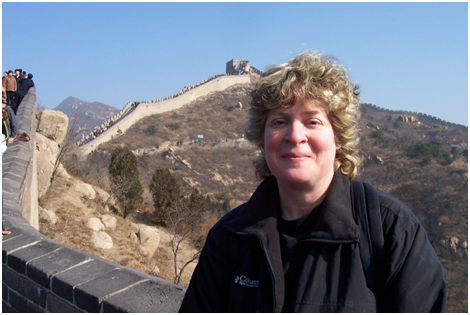 But don’t ask me about the Summer Palace or was it the Winter Palace, that’s the day I was walking around in a daze. Why? Because the next day I was to become a mom. The Chinese government decided that I could raise one of their children. Me, Joy Clein, a mom, and Kai Chunhai (Yuan Chunhai) would be my son. My dream of a son and a family was about to happen TOMORROW. How could I even think about the summer palace or the winter palace. I was thinking; what if he doesn’t like me? And what will he like to eat? And what the f__k am I doing?

Great, the next morning we get ready to take a plane from Beijing to Nanning. This is where the kids are. In a couple hours, I will have a son. Holy shit!!!. We get off the plane, and are taken to a hotel, and told we have a little while then we need to meet downstairs TO GO GET OUR KIDS. I had brought a little book and a little car. So I put them on the bed for when MY SON comes back to the hotel room. I also had a little sippy cup with water (little did I know that kids with a cleft palate can’t suck, but that’s another story), and some Cheerios.

OK, we are all in the lobby. We are 11 families/singles waiting to get our kids. Some are first timers like me, some are back to adopt their second, and some have bio kids, but are here for their first adoption. I think, we are all just as nervous. Finally we are driven to the Civil Affairs Building, and we are led to a room, and there we wait. Finally adults (caregivers) start coming in with kids. And then some woman in some official capacity comes in and she says some opening words, which I have completely forgotten. Then she starts calling names, and the person comes up, and their child is placed in their arms and they walk back to their seat.

My name is finally called. I walk up, and the cutest little boy is placed in my arms and a little backpack is handed over too. 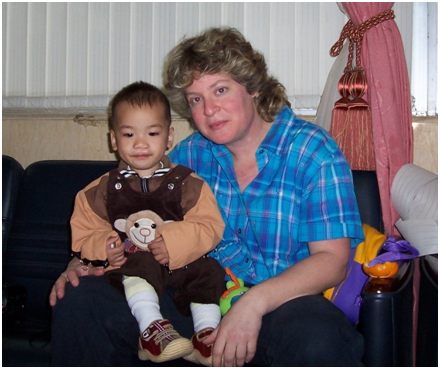 He is crying, and his caregiver has a mandarin orange that I take, too. He is wearing a brown coat with brown overalls and little maroon shoes. As he is placed in my arms, I realized, he is not wearing a diaper. This guy is 20 months old. I am so happy, and probably in partial shock and also thinking, I hope he doesn’t pee on me. But then I am focusing on him. He starts to cry; I give him some mandarin; he chews it, and isn’t crying. Then he starts to cry again, so I give him more. Basically, as long as I feed him the mandarin, which luckily I discover there are more of in his backpack (which I later discover is from his foster mom and has mandarins and pears), I peel them and give them to him. We sit in the room awhile (to give us time to get used to each other), and finally we are directed back to the bus, which takes us back to the hotel. To my utter surprise, this kid, who just has been place with me less than 30 minutes previous, proceeds to fall asleep on my lap. 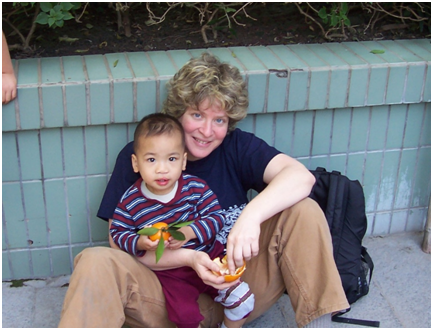 For now, I will say the rest is history. It’s been 8 ½ years since that awesome day. And since then my family has grown. I have brought home another awesome son from China. And since then, there have been ups and there have been downs, but they have all happened as a family. And as for the 20 month old who I first met without a diaper 8 ½ years ago, well, he never did pee on me. He learned English quickly. He developed a love for superheroes, comics, reading, swimming, playing in snow, sledding, travel, Legos, drawing, and much more. He has grown into an awesome kid who is compassionate, insightful, and empathetic beyond his years. He is a great son, a fantastic big brother, and an all-round awesome kid. 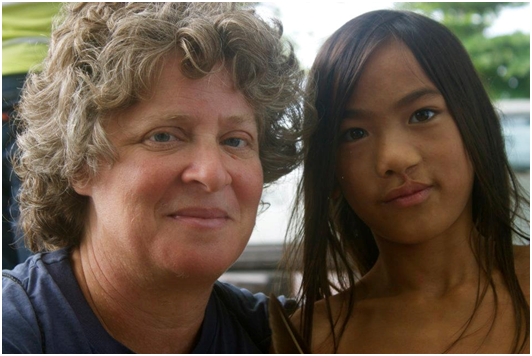 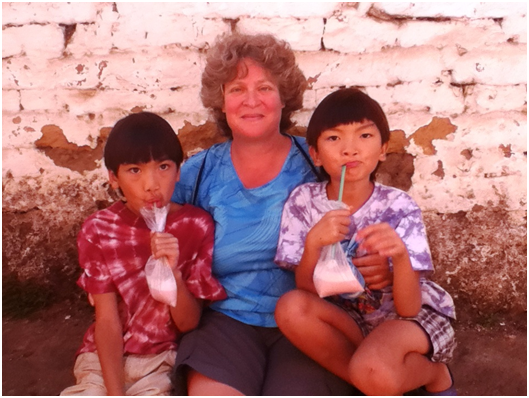 –Joy Clein is a single mom who recently finished a 9-month travel adventure with her 2 sons (ages 9 and 10) through Central America. Last year they traveled for 5 months, spending 3 months in Costa Rica. Future plans include returning to Fairbanks, Alaska (their home base) for the summer, and then setting off on a semi-permanent travel lifestyle. You can follow her on Facebook.