When I began researching options for reducing travel expenses, I came across couchsurfing. It seemed like a great way to not only reduce our expenses but to get to meet locals, develop friendships globally, and to experience an area through a local’s eyes. 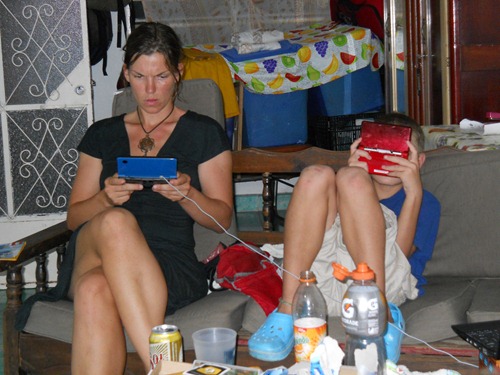 My first experience was . . . less than golden

Initially, I had some safety concerns about traveling with a child while sleeping in a stranger’s home, but my friend Lainie from RaisingMiro.com, is a single mom traveling with her son, and they couchsurf a lot. I found some other people who couchsurf and figured it would be okay. Especially since people have a profile with references (or advise to stay away) that they can’t edit.

Since we were still in the US, I figured we could start our experience by hosting. Shortly after signing up, I was contacted by a young man. He had no references and was looking for a last-minute situation. As I also had no references, I figured you have to start somewhere, and I offered to let him stay. Tigger was gone that weekend, which made me feel a bit better.

He seemed like a nice guy, and I was feeling better about getting this opportunity to meet new people. At the time I was also plagued by a kidney stone that we had been trying to get passed for about a month. Whenever it would shift, or try to shift, I would be in severe pain. One of these attacks happened shortly after he had taken a shower in my bathroom.

I couldn’t find my pain medicine. 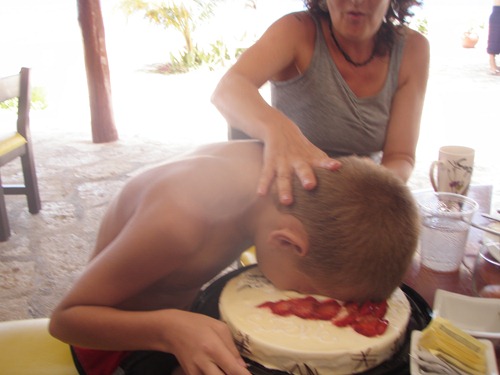 I wrestled with the situation for a couple of days after he left until I received an odd message in Couchsurfing’s site. It was from someone else who had hosted him after I did. “Did you have anything end up missing while he was there?” Crap!

We chatted, and I discovered he had done something similar to her. I went ahead and contacted the police to have it registered, and I also notified Couchsurfing. Then another email showed up. She had contacted his current host, and sure enough she had items missing as well.

Not the greatest introduction.

Our first attempt at being hosted ended up being a bust a well. The hosts never showed up, and we left their house to stay in a hotel since their house was freezing, and I couldn’t find any way of getting some heat. They didn’t respond to text messages or phone calls either.

When I had to go to Utah for the open water portion of my scuba training, I decided to give it a try again. I found someone who seemed interesting. It turns out he lives with his parents but was out of the country. His family was okay with hosting me, though, and I help my breath when I arrived.

They turned out to be amazing, and I thoroughly enjoyed my stay with them. I decided to keep up the Couchsurfing experiment.

Later I would host a guy from France who was traveling through the US. I didn’t get to visit with him very much, but we had a enjoyable experience. Phew!

We didn’t get many opportunities to surf while traveling mostly because prospective hosts never responded. While in Mexico, we did have the opportunity to stay with Wandering Earl and his girlfriend. They were superb hosts, and I consider Earl a good friend to this day.

We were in Utila for 8 months, and we had the opportunity to host several people, many of whom became good friends. One couple, Erica & Shaun from OverYonderlust.com, are like family to us now. One of our surfers remained in contact with us and made the long journey to Cozumel right before a hurricane so she could be with us for Tigger’s 11th birthday.

This is when I really fell in love with couchsurfing. We had so many great experiences during our time on Utila.

When we left Honduras for Colombia, we had a host in Bogota. She even joined us on our bicycle tour. 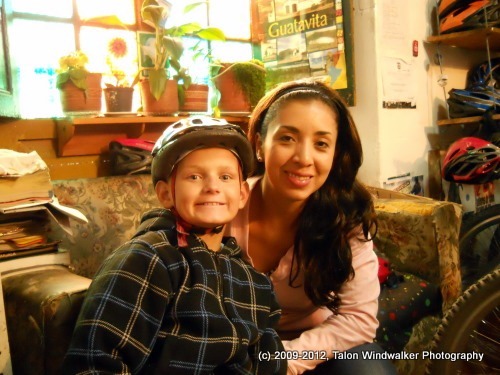 And then Ecuador happened.

We ended up with a couple in Cuenca who seemed quite lovely. One of them was a dance instructor, and together they also owned a shoe company that did brisk business. We had a great room and wonderful hospitality. Although, I felt extremely uncomfortable with one of the couple.

That discomfort peaked one day while I was at the dining room table working. He came up with that same creepy small that made me want to run from the room. “Estoy enamorado de ti,” he said. For those of you that don’t speak Spanish, he just confessed he was in love with me. He and his partner have been together for 25 years. My skin crawled.

As soon as he walked away, I brought up AirBNB and started searching for a place to move to. Luckily, a lady answered us fairly quickly, and we had a place to go. I thanked them for hosting us and let them know we were leaving the next day.

His partner knew something was wrong and kept apologizing. “I know we’ve done something wrong.” I didn’t have the heart to tell him and just kept replying that HE had done nothing wrong.

When I told Tigger why we were leaving, his response was: “Yeah, he was looking at you like he liked you all the time. I thought it was pretty weird.” When a 10-year-old catches it, you are not being subtle at all.

Time for a break

After that, I decided we were taking a break from surfing. We gave it a go again in France and had a wonderful experience with a fascinating couple in Lyon, but we haven’t surfed since.

Some communities are quite active with Couchsurfing, though. You don’t have to surf or be a host to join in with some of the activities. Medellin, Colombia, for one is incredibly active and has gatherings all the time. So one can still use Couchsurfing to meet locals without spending the night in someone’s home.

I still think Couchsurfing is worthwhile. We have had some great experiences, on top of our (mis)adventures, and many of them have turned into wonderful friendships. When we’re staying in an area for a while, I usually connect with the local community to see if there are any activities since those can be great ways of meeting locals and developing relationships.

The biggest lesson I learned as a host is to really pay attention to their profile. Read their references and try to get a sense of the person. If they have a hastily posted profile and few to no references, I’d probably not host or surf with them. Someone who is really interested in the mission of couchsurfing will take the time to have a meaningful profile.

If a person needs more than 2 nights, I always start out with 2 nights and say we can take it from there. If they end up being highly annoying or something, 2 nights is tolerable enough. If you hit it off, then a longer stay is reasonable.

As a surfer, it is so important to plan time to spend with your host. Sure, it’s a free place to stay, but the idea is to get to mingle with people from different walks of life and different cultures. I learned so much from our stay with our hosts in Lyon. You’re really missing out on some great experiences if you don’t make time to get to know the people you’re staying with.

Have you ever done couchsurfing? What was your experience?