About the Romans in Northern France

Home » France » About the Romans in Northern France

I’ve gotten to know Thomas Dowson via Facebook and love his somewhat unique slant on travel. Archaeology fascinates me, and I’m very pleased to be able to share his guest post about the Romans in France.

The coastline of northern France will forever be closely associated to the two World Wars. These beaches saw thousands of allied troops coming ashore from across the English Channel (or La Manche if you are French) to free France. And still today, from Calais in the north along the coast to Mont Saint Michel in the west, physical remains stand as a permanent reminder of some of the battles that made up these two devastating wars.

The ‘pool of reflection’ at Omaha Beach American Cemetery.

Just under two thousand years earlier these very same shores were the site of another well-known military manoeuvre, but then in the the opposite direction and leaving a lot less material evidence. That time it was the Romans invading Britain. Northern France may not have some of the spectacular Roman sites you can see in the south of France, some of which are the best preserved of their kind from the Roman era, but the Roman archaeology here certainly matches anything you might find from Roman Britain.

Traffic across the English Channel initially had a military focus as the Romans sought to establish their province. In time this developed into an important commercial route, as it still is today. Everything from food and wine, luxury items made from glass and pottery, and other essentials for establishing a Roman way of life was transported from the Mediterranean, through what is now France and then across the channel.

Consequently, a number of settlements were established along the French coastline, that over time became important commercial centres. And these cities were in turn supported by a vast network of rural towns and villages that sought to protect Rome’s strategic interest in the area. And many of these old Roman towns are still inhabited today. 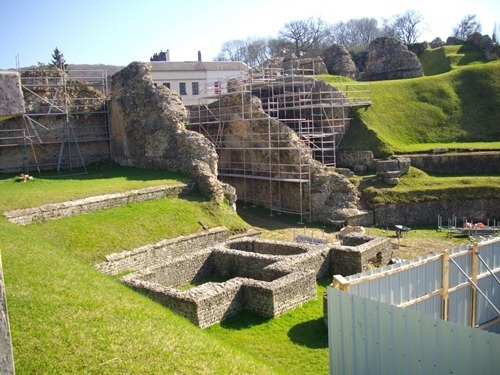 Renovations and development at the Roman amphitheatre at Lillebonne, near the mouth of the Seine River. What was once a fenced off site, will soon re-open allowing access and a visitor’s centre.

Increasingly, archaeologists are recognising the potential of these sites as attractions, for locals and tourists. And, of course, children love the Romans. Long gone are the days when archaeological remains were fenced off and you were lucky if there was an information panel to read. Now there are villages eager to make the most of their town’s heritage.

So it is not unusual to find a very good, albeit small, museum in some unlikely places. These are not dusty, renovated old buildings filled with boring glass cabinets. They are purpose-built local museums that have gone to great lengths to appeal to all ages, more often than not with engaging activities and a programme of events for children.

One of these Normandy villages built amongst the Roman ruins is Vieux-la-Romaine, just south of the city of Caen. Archaeologists are still finding all sorts of features from the Roman city. Whereas once the ruins would have been reconstructed following foundations, today these remains are stabilised and left as is. 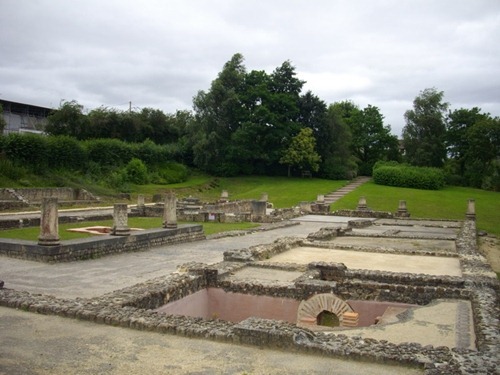 An 19th century reconstructions of a Roman villa.

Recently excavated foundations of a townhouse.

Here the foundations of Roman houses and reconstructions of ancient features are side-by-side with more recent houses that villagers have been living in for centuries, as well as a few new-builds. The state of the art museum is only a few years old, and is a good place to start before going on a walking tour of the village.

Also on offer for visitors to the area are sites where there are ongoing excavations. During the summer months, some of these not only offer guided tours of the excavations in progress, but they also have events where visitors can get involved. One of these is the ancient city of Briga, which is just above the modern city of Eu at the mouth of the Bresle River.

What started out as a military camp next to a Celtic shrine became one of the most important religious centres in the area. After a few decades of work here, archaeologists are only just starting to get an idea of how important the city was. It is vast, and for the really interested for 4€ you can take a tour that last about 2 hours taking in Roman baths, a theatre, the market square, and the remains of what was a small shrine but ended up as a large basilica. 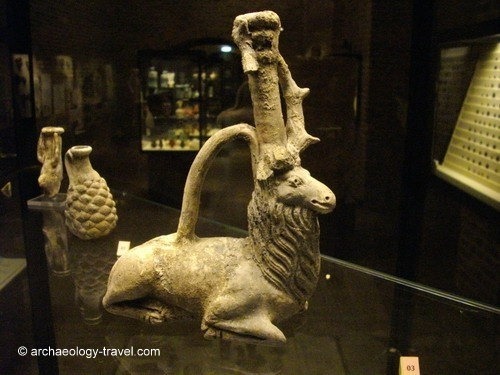 Besides numerous sites to visit, there are also some excellent collections of Roman artefacts in various departmental and local museums. One of the best is the museum in Amiens, which was one of France’s first regional museums and art galleries. Although there is nothing left of the Roman city on view on Amiens today, the museum is a must-see, if only for the amazing collection that have built up over the years from more recent development in the city—much of it destroyed in World War I. Further south in Normandy, the Departmental Museum of Archaeology in Rouen has all the artefacts that have been recovered from excavations in Lillebonne. The collection of  mosaics are worth the 6€ entry fee alone. Thomas Dowson founded the website Archaeology Travel – part travel blog, part online guide to archaeological sites and museums around the World. Before this he was an active archaeologist, specialising in prehistoric art and the contemporary significance of the past – on which he has published numerous articles and books. When not searching out ruins of the past or looking for the influence of archaeology on contemporary architecture, Thomas lives in Normandy, France.
To read more about Thomas’s archaeology travels, follow and connect with him on Facebook, Twitter or Google+.