–Kristin Addis is the Chief Blogette at Be My Travel Muse, a website geared towards independent women travelers who like to head off the beaten path in Asia. A native Californian and former investment banker, she has dedicated her foreseeable future to seeking off-beat travel around the world.

There are small, seemingly insignificant moments in my travels that stick with me, and from time to time, bring a smile to my face when I think about them. When I initially embarked on my solo nomadic journey, I thought of the big adventures as the life-altering ones – climbing through a cave, diving in a reef,going skydiving, or motor-biking through winding canyon roads.

I could never have guessed that it would be the little things that ended up creating the fondest memories but, in the end, those memories — half stories, really — are the ones I love to share the most when sitting across the coffee table and swapping tales with friends. They are the ones that warm my heart and keep me going even when travel gets tiring, feels hopeless, or home starts to sound like the best place to be. These are the moments that are worth traveling, nay, living for:

I lay on the sand with heart-shaped sunglasses on. A young Cambodian girl, she couldn’t have been much older than six or seven years old, walked by selling bracelets. I’m sure she had seen me before (I had been there for a little while by now) and she knew I wasn’t buying. That day, instead of hawking her product, she knelt down behind my head and bent over, creating shade and waking me from a semi sun-induced slumber.

She put her small, soft, gentle hands on my cheeks and pushed lightly, her hair surrounding me and blocking the sun. We both puckered as if to blow a kiss. It was our wordless way of making a connection. Then she stood up, and continued on her path. Almost at the beginning of my trip, this moment still sticks out as a favorite of mine. The touch was so innocent and kind, and her big, beautiful brown eyes are still vivid in my mind.

Becoming a celebrity in Kratie, Cambodia

In the small town of Kratie, I bicycled with a friend through the narrow, unpaved roads, riddled with potholes and surrounded by natural beauty. As we rode by each small, stilted shack, if there was a child or two inside, they were most certainly going to come out and see the spectacle of the day.

Why, it was a foreigner riding by!

I have never shouted a gleeful hello back to so many beautiful, smiling children in my life. Each one seemed more excited than the last to see us ride by. They would yell hello until we yelled it right back to them. It warmed my heart to feel so welcomed. 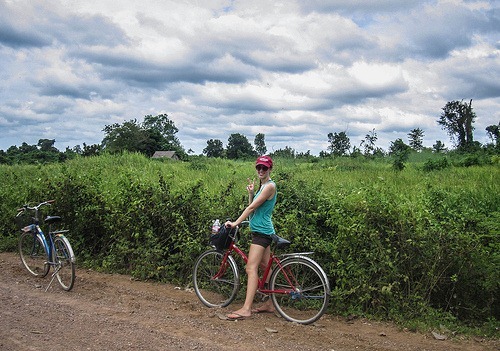 Motorbiking down the Bolaven Plateau, Laos

I clung to the back handles of the bike as my friend Morten drove what I considered to be far too fast down the road between Pakse and our next stop: Tat Lo. We were exploring the oft-overlooked Bolaven Plateau in southern Laos.

We drove past an open-air truck hauling a sizeable load of bananas. Two locals in the back motioned to us, as if to ask if we’d like a gratis bunch of bananas. We smiled at each other and as we drove by, I stuck out my hand and graciously took a bunch of small, sweet bananas.

Drive-by bananas, we came to call them. 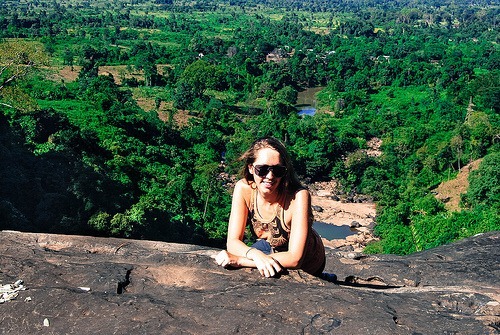 On the bus between Chiang Rai and Chiang Mai, Thailand

I had been on far too many busses lately and was starting to really dread the 5-7 hour days spent sitting and listening to the same Thai music on repeat. I was on my iPhone, Facebook chatting to a friend back home, when I noticed the old man next to me leaning over and looking right at the screen every time I took it out.

At first, I found it annoying. Could he mind his own business please? Then, I realized it wasn’t because he was trying to read what I was typing to my friend. He was simply fascinated, and likely hadn’t seen one this close up before.

Knowing just how obsessed Southeast Asia is with Angry Birds, I opened the app on my phone and showed him how to play. He leant in closer, and smiled each time the slingshot released a little bird. I offered him the phone so that he could try himself, but he became bashful and waved ‘no,’ in typical Thai fashion. For the rest of the trip, we had our entertainment – Angry Birds and friendly smiles.

Wandering in the ancient kingdom of Sukhothai, Thailand

I had randomly met what became new friends on the bus ride to the old town in Sukhothai, Thailand’s ancient kingdom. We were biking around the statues and ruins and stopped at King (something). Noticing that we were interested, but not quite able to read the inscriptions on the side, a little old Thai groundskeeper started saying the words and waiting for us to repeat.

We completed the chant, and he came to each of us, placed some gold leaf on our foreheads while muttering a blessing of sorts, and gave us each a hug. I was jaded enough at this point to believe he might stick his hand out to ask for money, but to my delight, he waved and said ‘goodbye!’ before I even had a chance to finish the thought.

We kept our gold leaf on until the sweat of the day wore it off. The blessing and the memory, however, stuck with me. 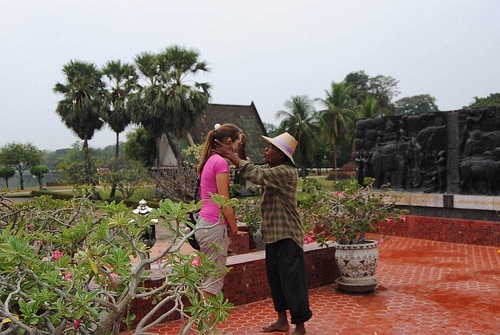 After a long and tiring day riding around the ruins, my gold leaf sweated off long ago, I took a wrong turn on the walk back to my hostel.

Sure that I was walking the wrong way, a local rode up on his motorbike and asked where I was trying to go. I told him the name of my guesthouse and he motioned for me to hop on the back of his bike, which I did.

He dropped me off at the front door without asking for a dime, told me to enjoy my day, and went on his way.

After two serendipitously kind acts in one day, I had really come to love that town.

Have you ever encountered random acts of kindness or beauty on the road? Share your stories in the comments!