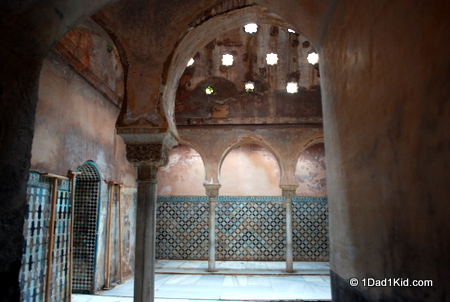 One of the big reasons people come to the beautiful city of Granada in southern Spain is to visit La Alhambra.  We had originally come here just because it was highly recommended by a couple of cyber friends who lived in Spain, as well as some other bloggers.  Thankfully, these same people were kind enough to give me a very valuable tip, which I shall pass on to you.  But you have to promise to keep reading, okay?

Get your tickets online at least a few days before your visit.  If you’ll be coming on a weekend, I’d buy them 1-2 weeks ahead minimum.  You can purchase them about a year ahead if you’re really that anal of a planner.  Make sure you use a credit/debit card that you will have on you, because you will need that card to print out your tickets once you’re in Granada.  Once purchased, there are several ATMs in the downtown area that will issue you the tickets (look for La Caixa), or you can just wait until you’re at the famed 10th century Berber fortress where there are plenty of kiosks.

We had the added bonus of knowing another traveling family who were in southern Spain and wanted to visit Granada as well.  After looking at the forecast and discovering what day was supposed to be nice, we planned on that and arranged our meeting time.

They had a car, but we were coming by city bus.  Little did we realize that would be just the beginning of our day’s adventure.  The day before, which had been predicted to be crappy weather, wasn’t too bad.  This day was supposed to be sunny.  Apparently, someone forgot to tell that to Mother Nature, because she was awfully grumpy and it rained.  All. Freakin. Day.  Until after we left of course.  *shakes fist at the sky* 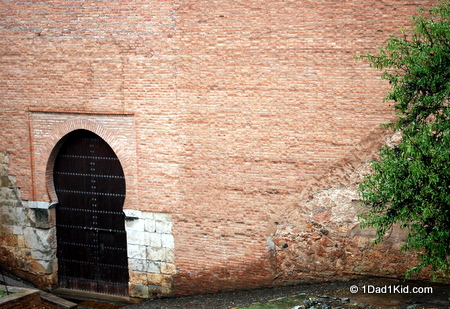 The grounds where La Alhambra are located are very impressive.  There are some beautiful gardens and great views.  There are also some very beautiful and fascinating ruins as well as remnants of fortresses.  Navigating some of the tight paths is very interesting because the Spanish seem to have a cultural blindness of other people’s presence.  Or maybe they’re genetically predisposed to absolute crap spatial perception.  When they see a rather robust body (mine) coming up stairs that are barely wide enough to accommodate my bodaciousness, something tells them they can still fit in the remaining 1-mm space.  Let’s just say there were many people who were lucky I believe in nonviolence.  And that I have no desire to discover what the inside of a Spanish prison looks like.  You, at least, would have had some rather entertaining news to watch and read, though.

The structures here rage in age from the medieval baths to the more modern Palace of Carlos V, which took over 400 years to complete with work beginning in 1527.  So many of them are quite unique from each other, that it really is worth exploring all of them. 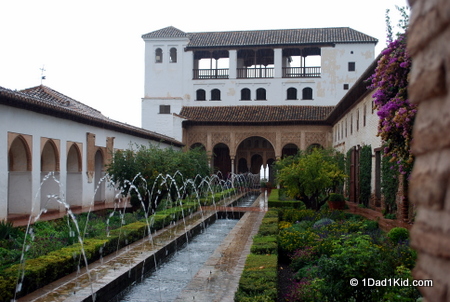 I wish they would have included more markers, though.  Unless you’ve paid for a guide or an audio device, you have no idea you’re standing in the dressing room of the empress, for example.  The only signs we saw were on the outside of structures.  Once inside, you often have no clue what exactly you are looking at.  Not a big deal, but it would be nice.

The crown in the diadem, so to speak, of the entire complex is the Nasrid Palace.  Entry to that monument is strictly controlled.  Your tickets will tell you which group you’re in.  We had a couple of hours before it was our time, so we got quite familiar with the rest of the buildings and gardens.  By the time we entered, we were all a bit wet (some of us more than others) and cold.  My friends had 3 small children, and since Tigger had decided to not bring an umbrella he was completely soaked through.  After walking around “old boring buildings” in these conditions for two hours, he was starting to get whiny, and I was getting testy.

Then we entered the palace.  When I spotted the outside of Versailles during my first trip to Paris, it literally took my breath away.  Entering this palace was fascinating but lacked the grandeur my mind had expected.  Until we rounded the corner and entered the Patio of the Lions.  My friends were ahead of us, and one of them came back out and said to me: “Oh, Talon, you’re not going to like this AT ALL.”

And he was right.  It was jaw-droppingly, incredibly ornate, beautiful awfulness.  I was ready to pull up a chair and just sit admiring it for HOURS.  I tried to imagine what it must have been like to live among its 124 carved marble columns.  If this was built to inspire or cause one to reflect, I’d say the mission was accomplished.  It was absolutely stunning, and pictures just can’t do it justice. 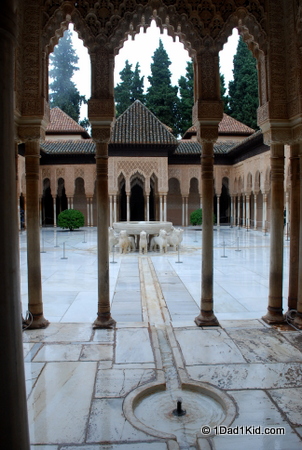 The remainder of the palace did not disappoint either.  Almost every inch is covered in carvings, from about waist high all the way up to and including the incredibly tall ceilings.  To accomplish something like this in the modern day would be quite the feat.  I can’t even imagine what it must have been like to do all this as early as the 10th century.

This should be added to your list of must-sees in Spain.  It really shouldn’t be missed.  And while you’re in Granada, make sure to also visit the cave homes in Sacromonte and my favorite area of Granada—the Albaicin.

Have you been to La Alhambra? What was your favorite part? What tips would you like to share?