Travel safety is a theme I see repeated often, and it appears in the vast majority of all questions I’m asked by readers. “I really want to travel, but I want to go somewhere safe.” I totally understand wanting to be safe. There are places that are definitely safer than others. When discussing safety it’s important to “keep it real.”

Statistically speaking, the highest risk of accidental injuries occurs within 5 miles of one’s home. If you go by statistics alone, you’re much safer traveling.

“I read that someone got killed there.” Yes, people do get killed all over the world. It’s an unfortunate reality in our world. However, keep in mind that the United States has 5 cities that fall within the list of the top 50 most violent cities in the world. It seems we rarely go a day without a news report of a new shooting.

Many people sadly buy the Media’s representation of Mexico as being a dangerous country, yet while we lived there I could go to the mall, cinema, schools, etc., without fear of being shot. I’m sure some exist, but I’ve yet to see a school in Mexico that requires people to pass through metal detectors to enter the building while they are becoming almost common place in many parts of the US.

Years ago when I first went to Paris, friends back home were quite nervous for me because on the news it seemed that Paris was on fire. I got emails and texts from concerned people and had a hard time discovering the local source for the concern. In reality there were some protests that covered one block of the city which has over 2 million urban residents. A single car had indeed been set on fire during the protests.

Hardly as bad and scary as the news back home was reporting. 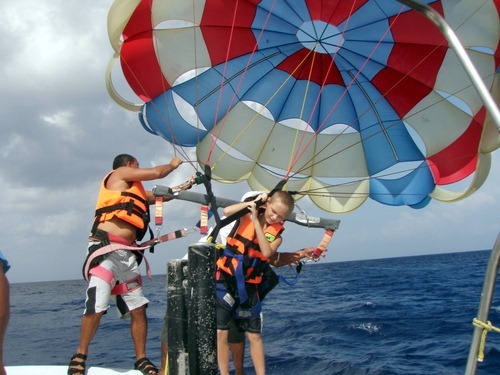 I find it interesting when people cite a single or a few incidents of violence in an area and therefore deem it unsafe while failing to remember some other safety issues: In the US, someone is killed in a traffic accident every 12 minutes. One American dies every 159 minutes from drowning, for a total of 3,306 drowning deaths a year. Yet people get in their cars every day to drive. People still go swimming. An American is killed every 29 minutes from an accident while in their own home. In 2010, there were 11,078 firearm-related homicides, and the US ranks as 14th in the world for gun-related deaths (per 100,000 population).

It’s understandable. We live in a culture of fear that the Media is only too happy to support. When you’re already on edge and hear about something happening in a distant land, it’s hard not to be frightened. Just remember that every place has its risks. Also, most of the time tourists are fairly safe from violent crimes. Usually the biggest risk is getting pickpocketed/theft.

There are not many places I wouldn’t travel with Tigger for safety reasons. My list of places we’ll be avoiding because of human rights and women’s issues is actually larger.

Places on my no list currently because of travel safety

Afghanistan and Yemen are on my wait-and-see list. I know people who have been to both countries and felt pretty safe, but none of them were traveling with a child. Obviously, there are risks I feel comfortable taking as a solo traveler that I can’t when traveling with a kiddo.

Generally speaking, most of the world is pretty safe and filled with incredibly generous and wonderful people. Travel safety is like anything else—Use common sense and pay attention, and you’ll usually be just fine. And really that applies to anywhere in the world.

Are there places you’re too afraid to visit? Which ones are on your no-no list for safety reasons?