Should you choose to visit Bangkok or Hanoi?

Home » Thailand » Should you choose to visit Bangkok or Hanoi?

Bangkok took a bit of time and multiple visits to grow on us. Our 1st trip was after a month on Koh Samui. I’m not a fan of big cities normally, so I just chalked it up to that. But our second time was definitely different, and we really enjoyed it. Now’ we’re in Vietnam which is a whole different world. So if you’ve ever wondered about visiting Bangkok or Hanoi, here’s my perspective. 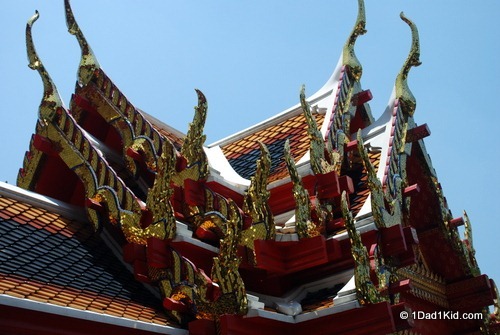 Thailand has a calmer culture. You honk only when it’s necessary. Traffic noise is really pretty quiet for a big city. Actually, so is most of the noise. Sure, every so often you’ll have a club thump thump thumping into the night, but generally speaking it’s pretty mellow.

Hanoi is not. Hanoi loves its noise. It cherishes it. It has far more motor bikes than cars, and they’re loud. That’s before you factor in all the honking. All the freakin’ time.

But variety is the spice of life, and the noise isn’t limited to just honking and engines. We also have the cars that drive slowly through the neighborhoods blaring announcements and what sound like infomercials. At night, the place gets a rockin’ from loud music. Thankfully, we’ve at least been spared the karaoke that is reminiscent of cats doing the dance of love in alleyways.

Vietnamese food is really quite good, but Thai food kicks it culinary butt in my book. If you don’t like eating with chopsticks, definitely stay in Bangkok. (I love them personally, but I know not everyone does, including Tigger.) From what I’ve seen in Hanoi, I would also say that Thai food in Bangkok is fresher. Most Thai food is prepared as it’s ordered, whereas a lot of the Vietnamese food we’ve seen in Hanoi is prepared and just waiting to be ordered.

Another interesting thing about Vietnamese restaurants and booths is that they often specialize in and serve only one specific dish. Can make ordering things a bit easier, though.

Prices are fairly similar. Depending on what you order, you can eat in both cities for around the same cost (around $1-2 per serving).

If you tend to be a bit more. . . squeamish about street food, stick with Bangkok. The food there is cooked on grills and in woks while the person stands. In Hanoi most street food is prepared just above the ground, with everyone walking by, with the person squatting next to it. I have no concern with it, but someone who is more sensitive might not enjoy that.

Ditto when it comes to comfort level while dining. Street food vendors in Hanoi have limited, very low tables and chairs that make me feel like I’m visiting a preschool. Obviously, it works for them, but for my Western hiney and my bad knees, it’s rough and uncomfortable. In Bangkok, you’ll find more comfortable seating (or you walk around with your food).

Note: Restaurants in Hanoi have standard seating and often have flatware. That food is quite a bit more expensive, though, just as it would be in Bangkok. 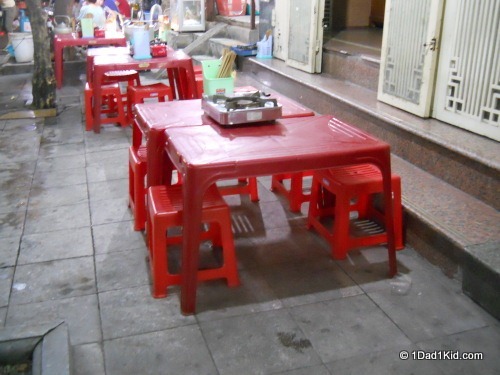 Bangkok is a pedestrian’s friend compared to Hanoi. If there is a busy street, you will easily find an overpass so that you can get to the other side safely. On a less busier street, most Thai drivers, including taxis, will slow down or even stop so that you can cross. Even if you’ve gone against the light, Thais are too polite to honk at you or run you over.

Hanoi, the City of Lakes, does not have this compunction. Crossing the street here is an event. Generally speaking, scooters, bicycles, and motorcycles will just move around you. The drivers of cars, however, are seemingly only too happy to plow right over you.

While the Venice of the East has sidewalks that are in fairly decent repair, Hanoi doesn’t want you bored while you’re out for your stroll. You’ll have plenty of cement obstacles to keep you awake.

Bangkok makes getting around without a car quite a bit easier, too. Taxis are also cheaper in Bangkok.

Both countries are a warmth-loving person’s friend. But temps in the 40s (Celsius) can be quite sweltering. In Bangkok, it’s very easy to tuck into a place with AC to get a reprieve. Hanoi offers a bit more of a challenge to that. A lot of places just have fans running indoors. If you can sit right in the fan’s path, you’ll be fine, but those seats are often already occupied. Bangkok has a fondness for large shopping centers that is not shared by Hanoi’s more humble surroundings. 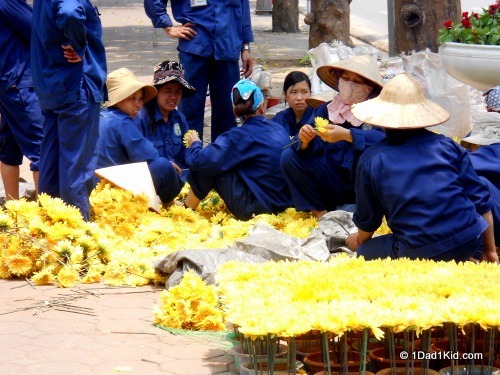 This is really a big one for me personally. Thailand is the Land of Smiles. When you purchase something, a clerk will hand you your money carefully, often holding it in both open palms, while giving you a dazzling smile. In Hanoi, they fling your dong (the name of the Vietnamese money) at you, rarely crack a smile, and just seem surly. It might be exaggerated for us since we’ve spent the last few months in very friendly Thailand and Malaysia, but I’ve read similar comments from other people so I’m thinking it’s a cultural reality here in Vietnam.

In Thailand, I always felt welcomed. When we had a struggle communicating, it usually ended up with both of us laughing as we worked our way through it. Hanoi has a much grumpier crowd. Many of the merchants I’ve dealt with have acted like we were inconveniencing them with our business. I’ve watched and seen that locals are treated the same way. It’s just how it is here.

The touts and cyclo and motorcycle taxi drivers are much more aggressive than the ones in Bangkok. From what I’ve seen, I’m going to chalk that up to a different economic situation between the two cities. Nevertheless, it’s part of the experience and can affect different people different ways.

I never once felt at risk in Bangkok and was generally left alone. Yeah, we had the occasional taxi driver that didn’t want to use the meter and the people who tried to convince us the Grand Palace was closed when it wasn’t, but pretty much that was the extent of it.

Hanoi exhausts me. Not only do we have all the honking, “fun” street crossings, and the heat to deal with, but scammers are out in full force. During our first 30-minute walk, I spotted no less than 5 people actively sizing me up (even Tigger caught it a couple of times, which tells you something), and disappointed at least one possible pickpocketing attempt.

I have felt much more “on guard” in Hanoi than anywhere else we’ve been.

Comparing things to do and see in Bangkok versus Hanoi, I’m going to give Bangkok the win in this category as well. There is more of a variety of things to do in Bangkok than in Hanoi. And the former makes it so much easier and affordable to get around and experience things. 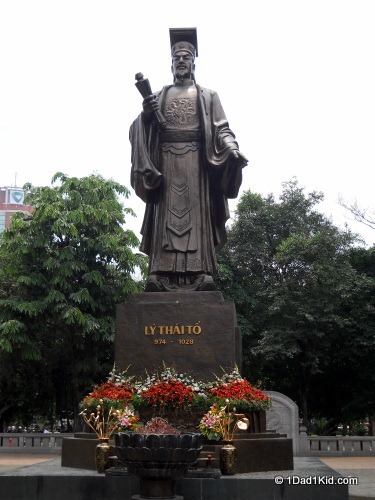 Getting there and visas

Thailand gives most countries a free, no hassle, 30-day stamp upon airport entry (overland visitor get 15 days). Vietnam requires an advance visa and charges a $45 USD stamping fee per person. You can get a visa on arrival, but you have to go through an online agency which charges its own service fee on top of the stamping fee you’ll pay at the immigration office.

Flying to Bangkok is usually much cheaper as well, unless you’re flying from another Asian country. Even then, prices are generally lower flying into Bangkok than Hanoi.

On a side note, Thailand’s rail system is better and cheaper as well.

If you’ve decided Thailand is the place for you, here are some cheap hotels in Bangkok.

Hanoi has “crazy insane roads,” and he’s nervous crossing the street here. He also feels Bangkok is a lot safer than Hanoi. (We haven’t discussed my opinion regarding this, and I haven’t said much to him about any of this.)

Comparing the two cities is really a lot like comparing apples and oranges. They’re both Asian countries, but that’s where the big similarities really end. We feel like we’re in a completely different world here in Vietnam compared to the other countries we’ve been in Southeast Asia.

We have found Thailand to be a very easy country. That’s not always the best thing when you’re looking for experiences, but it helps explain to me why so many people go there and end up staying a long time. It’s also an extremely welcoming culture, which is quite enjoyable.

If you aren’t an experienced traveler, I would probably steer you toward Bangkok compared to Hanoi. I feel like the level of scams and awareness you need, the lack of infrastructure, and some of the cultural differences in Hanoi are going to tax a person more than using Bangkok as an introduction to SE Asia.

Hopefully, the above will assist you in deciding whether to visit Bangkok or Hanoi first.

What are your thoughts? Which of the two do you prefer and why? Would love to read your comments!