Seat of the 2012 Apocalypse–Chichen Itza 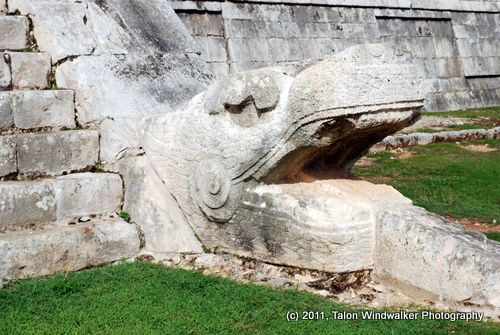 During the last couple of years, there has been a lot of hype over the supposed upcoming apocalypse coming to a winter solstice near you.  If you’ve somehow managed to miss hearing about this dreaded event based on the Mayan calendar, check this out to get caught up to speed.

One of the most famous structures at the UNESCO Heritage Site of Chichen Itza is the Temple of Kukulkan, the feathered serpent deity portrayed throughout the 47-hectare site.  (There are an additional 15 hectares of property which is not open to the public.)  The temple was designed so that during the summer and winter solstices, shadows form along the structure giving the appearance of a serpent’s body slithering down the temple until it connects with the head at the base of the pyramid.  This represents the serpent god descending to earth. 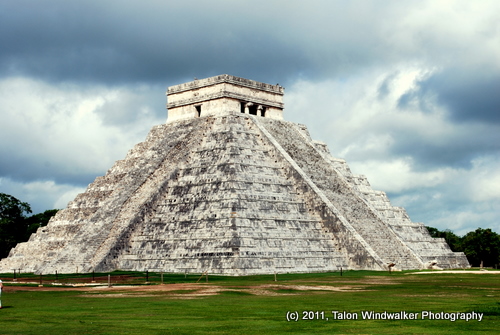 As of yet the serpent body has never fully connected.  The rattle has been missing.  It is believed by some that this transformation will occur during this year’s winter solstice.  The body will finally be completely connected, thus symbolizing Kukulkan’s return to the world.  The interpretations vary as to the actual significance of his appearance, however.  Some say that it symbolizes a rebirth of consciousness, a reconnection of humans with Spirit.  Others believe it signifies a great cataclysm that will change life as we know it.

Whatever your thoughts about this prophecy, or the expected impending apocalypse, Chichen Itza is an incredible site that merits a visit.  (Incidentally, recent archaeological discoveries have shown the Mayan calendar does not end in 2012.) 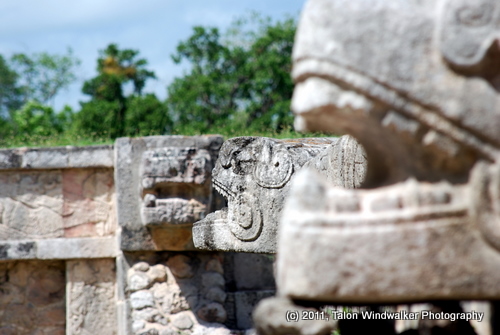 This Wonder of the Modern World is part of the Yucatan Peninsula of Mexico and is easily accessed from the charming colonial town of Valladolid but can also be visited from Playa del Carmen or Cancun. ADO, or the 2nd-class Oriente, buses travel both to and away from the site.  You can also catch one of the reasonably prices colectivos (small vans and taxis located outside the bus station in Valladolid) to the park.  The price varies by how many people are in the colectivo and, of course, whether or not you’re in high or low season.  Feel free to haggle.

[notice]Tip:  The park opens at about 9 AM.  It is HIGHLY recommended you arrive there when it first opens.  It is a 3- to 4-hour trip from Valladolid.  It’s worth the early morning wake-up, though, because within a few hours the tourist buses arrive, and the park will be swarming with tourists and highly annoying touts.  Not to mention it gets quite hot and humid as the day advances. [/notice]

Once you enter the park, visit El Castillo, the other name for the Temple of Kukulkan, first.  Why?  This is the main attraction for tourists visiting these ruins.  If you want a photo of the famous structure, this will be your best, and likely only, chance of getting a photo without other people in it.  After about 11 AM, sometimes earlier, you can kiss that chance goodbye. 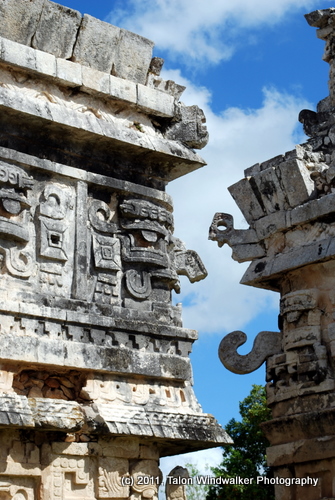 Aside from the pyramid, there are many other remarkably preserved buildings, including the site referred to as “the nunnery” and the long ball court.  This is where the pre-Columbian ōllamaliztli, a game similar to racquetball but presumed to be played without the use of hands, was played.  Some tour guides will tell you that the winner of the game was decapitated as a sacrifice, but many archaeologists think this is false.  Considering the height of the rings, it’s also doubtful that many plays were successful in achieving that lofty goal. 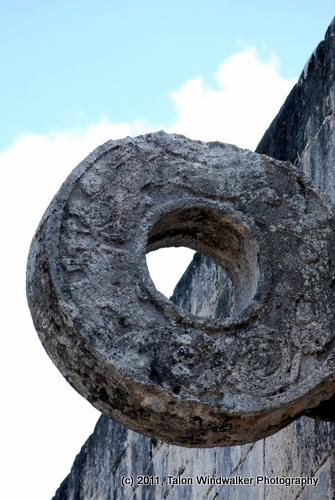 If the humidity, heat, bugs, and touts are getting to you, you can really avoid walking through the seemingly endless gauntlet of vendors on the way to the Sacred Cenote.  It basically looks like a pond that is in a rather deep basin.  There are some smaller ruins around there, but nothing near the scale of the other structures at Chichen Itza.