Home » Peru » Navel of the World

Navel of the World

Note : This is part 2 of a multipart series about Peru. All photos are protected by copyright.

We could probably easily do a few posts just about Cusco. For some odd reason I had always imagined it as some small town in the mountains. Boy was I wrong! (Make sure to click on this pic, it’s much better full sized.) 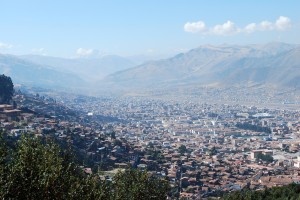 City was laid out in the shape of a Puma

It is a city that quickly goes from fairly modern to ancient Incan just by turning the corner. Getting around Cusco is fairly simple. There are plenty of colectivos (ranging from mini vans to full-size buses). Taxis are as easy to find as tourist traps. Most will slow down hopefully as they see you walking. I prefer walking around, and surprisingly it’s fairly simple to get around on foot. Like most South American towns, the sidewalks are narrow. Since there is culturally no sense of personal space, don’t be surprised when you are bumped against while walking. As with anywhere, you should take precautions to avoid being pickpocketed. You will also find plenty of people dressed in traditional clothes who are only too eager to pose for a picture. As soon as your camera is away from your face, a hand will shoot out and you’ll be asked for una propina (tip). Occasionally you’ll hear moneda (coin). Generally s/1 (nuevo sol, about 35 cents USD) is typical. This enterprising girl worked it so well that I gave her s/2. To put it into perspective for you, I commonly found delicious meat-filled empanadas for s/2. So una propina could easily be a small meal for a local. Since I prefer candid shots, I resorted to being more stealthy usually, though. 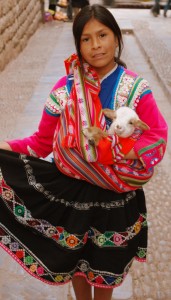 Even while playing next to the ancient ruins of Saqsaywaman (closest pronounciation and easiest way to remember it is that it sounds like “sexy woman”), this boy spotted me standing on another hill taking his picture and quickly stuck his hand out and called for una propina. In case you’re wondering, he took a normal-sized plastic water bottle, squished it flat, and sat on it as he rode down the limestone rocks. 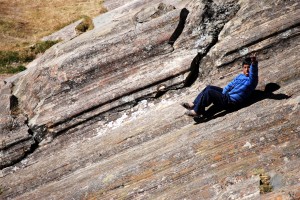 I happened to have arrived during probably one of the largest celebrations in Peru: Cusco Days and Inti Raymi, a reenactment of an ancient Incan ceremony that occurred near the winter solstice to keep the sun from retreating from the earth. Guide books and most online resources talked about how this was primarily for tourists. That may be, but if you saw the crowds of S. Americans who were there, it isn’t just for the gringos. I was told that people come from all over the former Incan Empire to come celebrate. A lot of pride goes into this celebration. The Cusco Days Festival, which also coincided with the Gastronomic Festival held further away from the Plaza de Armas, is celebrated for days. The parade starts at about 7 AM and continues until around 3 AM the next day. No, I’m not kidding. It’s phenomenal. They know how to party!

If you plan on attending Inti Raymi and haven’t spent the $100 USD for reserved seating, get to the plaza early, or you won’t get much of a view. The parade comes into the plaza, a ceremony is enacted, and then the parade heads up the steep climb to Saqsaywaman where the sacrifice of a llama is performed. According to the clerk at the hotel, they actually do kill the llama, but I don’t know if that was true. Buses were leaving to bring nonticket-holders up to claim their spots at about 8 AM. The group doesn’t arrive to the ruins until about 1 PM. Needless to say, I didn’t attend that part of the celebration. 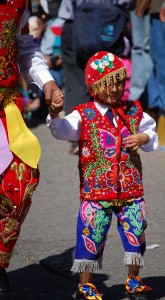 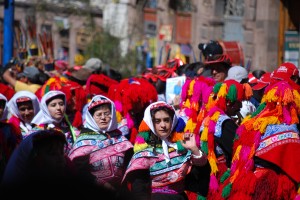 Again, as with any crowded area, be very aware of pickpocketers. Women should avoid carrying a purse, as many ladies have had the bottoms of their purse cut without realizing it until they went to grab their wallet or something and discovered their hand went straight through their bag. Always keep your hand on your camera’s body, not just the strap. 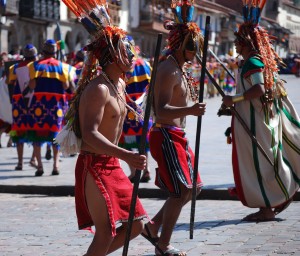 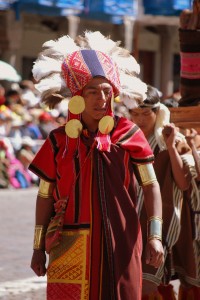 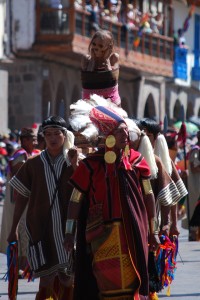 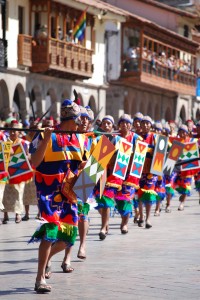 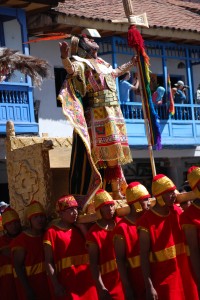 The Plaza de Armas is the main focal point of the city. When the Spanish invaded and forced the natives to build churches, all churches were built facing the plaza. Except for one which points toward the apu that was traditionally appealed to for justice. Apparently, the Spanish didn’t catch the misdirection, and I doubt they understood why the church was pointed toward that specific mountain peak. Most of the cathedrals in the area charge admission, and they all do not allow photography or video recording. Also, they are all actively used for Catholic worship, so remember to respect the building, its artifacts, people praying and lighting candles, etc. One little tip: If you are Catholic or are comfortable participating in Mass, you can enter the cathedral for free. Then after Mass you can move about the building and explore a little more easily. If you move away from the plaza, almost every church is admission-free, but they still don’t want you taking photos. I highly recommend visiting the Belen church. The inside is absolutely amazing, and it is one of the few buildings I have stood in where I was enshrouded by so much peace that I was reluctant to leave. Every inch of the inside of the chapel is covered by paintings, artifacts, saints, candles, etc. A good site for Cusco churches is http://www.meetmyperu.com/cusco-churches/. 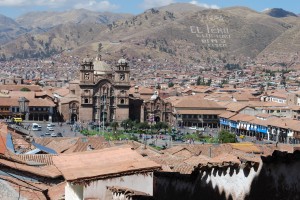 Restaurants around the plaza serve excellent food; however, you will pay much more (sometimes three times as much or more) than establishments just a few blocks away. There are also plenty of street vendors. Restaurants aren’t always obvious, so keep on the lookout for places with small chalkboard signs on the walls. They will list the day’s specials. Typically the special is three courses.

If you won’t be skyping and need to make a phone call, I wouldn’t bother with cards. The locutorios (call centers) offer dirt cheap, high-quality phone calls. I phoned my son who was back in the States from one and had a fairly lengthy conversation (for a 9-year-old boy) that ended up costing me a whopping $1.60 USD.

If you’ve never been to South America, keep in mind that any wall that comes up to the waist or higher is fair game to be urinated on, so don’t be surprised if you pass men relieving themselves in alleyways or other places. Any alley or wall near a place serving alcohol will most likely have a very recognizable odor. Surprisingly, I didn’t find much of that in Cusco or anywhere else in Peru.

Check out my post Two Winter Solstices in 2010 for more tips about travelling around Cusco. Many people only use Cusco as a jumping off point to visit Machu Picchu. I spent 5 days there, and it wasn’t nearly enough. 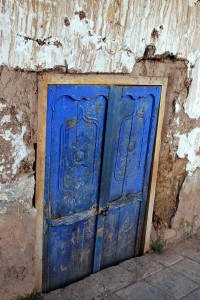 In the next post we will talk more about Saqsaywaman and the ruins at Tipón, also the best place to sample traditionally prepared cuy (guinea pig; tastes like quail).