My first Thai BBQ scared me

It’s no secret I’m what many would call an adventurous eater. It generally takes quite a bit to make me take a second thought before trying a new food.

Unless it’s a bug or contains broccoli or cauliflower. Then all bets are off. Even though I HAVE eaten grasshoppers and a beetle before.

When I travel, I’m even more adventurous. I absolutely love trying new dishes, and I’m generally rarely disappointed. When in Paris the first time, I saw kite on the menu. I never knew they were even edible! I ordered it, and it remains the best meal of my life.

On our recent trip to France, I tried plenty of new things, but it’s kind of hard to be considered adventurous when you’re eating French food. Sure, they’ll eat almost anything that’s edible, but still. . . it’s France.

Now that we’re in Thailand, I’m having a blast trying new foods, including new vegetables. I’m not fond of vegetables, so that’s saying something.

The other night we were driving around, and I spotted a Thai BBQ. Thai food. BBQ. How can you go wrong? I thought.

We decided to try it out. It’s a buffet, so I figured double score! We sat down, and in the middle of our table was an interesting metal pan with some flat stones in it. As I gazed at it curiously, a young man came over, placed a metal thing on it, poured water into the ring in the basin, and soon it was ready to cook on. This is when I realized that you cook your own stuff. Cool! 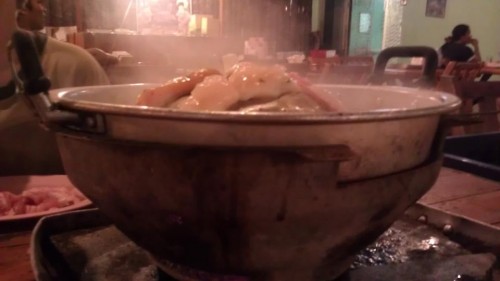 We grabbed our rather tiny plates and headed toward the tables. I spotted the large table with multiple square trays on it and headed there.

That’s when I froze.

As I stared at all the cut-up raw meat, I quickly noticed that the containers were resting directly on the non-chilled wood of the table. Here were easily 20 different types of meats, organs, and intestines before me.

Raw and unchilled. In tropical heat.

Why does that bother a seasoned traveler and adventurous eater?

When discussing food safety in other countries, I quickly remind people that in all the countries I’ve visited I’ve only had food poisoning twice, and both of those times were in the States. I’ve bought and eaten unrefrigerated meat several times without any issues. So what gives this time?

The last time I had food poisoning was after visiting a place called China King and eating their Mongolian BBQ. I had a momentary flashback, and I wasn’t sure I was going to be able to continue. The first time occurred after eating the most disgusting corned beef to ever be served on a plate. It took almost a decade before I could eat pastrami again. If I got sick again after this type of BBQ . . .

I got past that moment and enjoyed the meal, but I was nervous the whole night.

Would I wake up in the middle of the night like after the last two times? Was I being stupid to risk having to do the dance of kneeling before the porcelain throne followed by a quick leap and spin in the air to sit down upon its cool surface like I was some ungraceful interpretive dancer?

After 12 uneventful hours, I gave a sigh of relief. I had survived my first Thai BBQ experience unscathed. As did Tigger. Phew!