Some great items to add to your travel list

In addition to their wonderful self-compressing packing cubes, Eagle Creek also sent me some other items to check out. I’ve been impressed with them so wanted to share these items with you.

I call it a convertible suitcase, but whatever you want to label it, it’s worth checking out. They obviously have many different types of luggage to choose from, but the one I tried out for them is the Switchback 26.

I had given up on a backpack the last time we were in Mexico. I have some back issues, and when they decide to flare up I’d be screwed with just having a backpack. For the most part I’ve really enjoyed having a wheeled suitcase; however, there have been times when a backpack would’ve been more handy.

In Paris, there were so many steps to climb that having a suitcase almost made me swear, especially since Tigger wasn’t strong enough to carry his suitcase up. In addition to back issues, I also have bad knees. Stairs are hard enough without having to lug up a 20- and 13-kg suitcase as well!

The Switchback gives me the best of both worlds. It has 2 large, sturdy wheels with a solid handle that zips away nicely. It’s easy to roll behind you, and if you come upon several flights of stairs, you can just sling it onto your torso like a backpack which makes things a LOT easier.

Additionally, some surfaces just aren’t as amenable to wheeled luggage, like the cobblestone streets found in many parts of Europe and that time we had to schlep our stuff through the dirt roads of the oasis in Morocco.

It has ample room for the stuff I carry and is also a bit lighter than my wheeled suitcase (3.6 kg with the straps on). Lighter is always better in my opinion, even if you aren’t climbing a ton of steps. 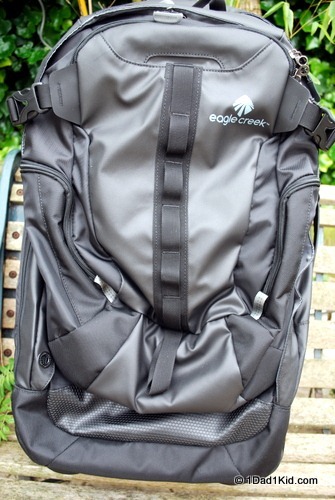 An additional feature I particularly love about this particular luggage is that it has an attached daypack which unzips easily. I’ve seen these before, but Eagle Creek has a tendency to go the extra mile on things. The daypack boasts lots of room and also has a padded sleeve that will fit most 15” laptops. There’s another sleeve for a tablet. An additional extra touch is the key fob they included which also has a bottle opener at one end. 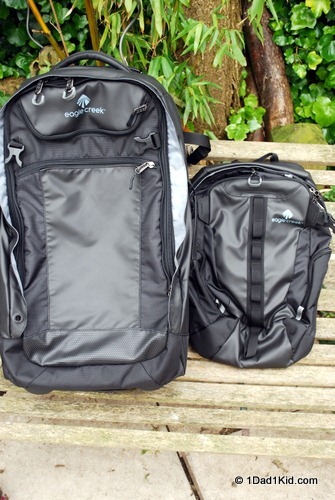 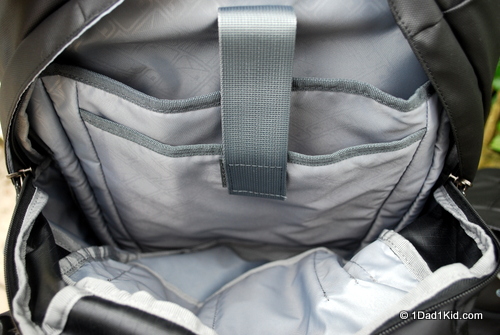 The big pack with its straps 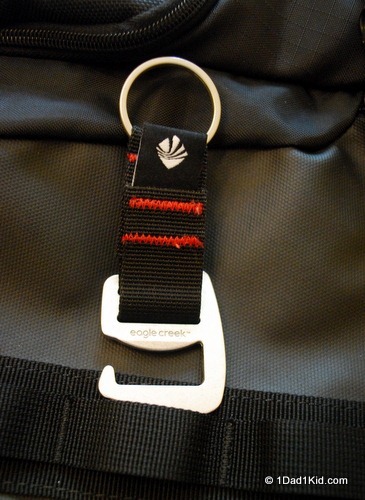 The day- and backpack have cushioned mesh so that it’s easier to wear them. The mesh really helps in hot climes.

The straps can be moved between the daypack and backpack. I tested it out, and you can still attach the daypack to the main bag with the straps still on.

Being a larger-framed person, I’m always a bit nervous about straps fitting me well. Also, the waist belt that many backpacks come with often don’t extend far enough around my belly to make things comfortable. So, I was curious to see how they handled things with this bag.

Everything was comfortable! And the waist belt was long enough to extend much farther than I needed. There are also load-lifter straps on the shoulders which help take pressure off your back.

The straps were super easy to connect and exchange. In fact, on my first try, having never done this before, it only took me maybe 2 minutes to get everything attached. The straps are labeled so you can quickly figure out which strap goes on which side. Clips are sturdy and can be attached or unattached while wearing gloves, too.

I took the fully-loaded pack for a nice long walk while using it as a backpack and another walk while pulling it behind me. I wanted to get a feel for what it would be like to walk from a bus station to a hotel or whatever. I went over varied terrain when pulling the case behind me as well since that’s real life.

The Switchback did great! It was quite comfortable to wear as a backpack and only required minimal adjustments, which were easy to make on the fly. 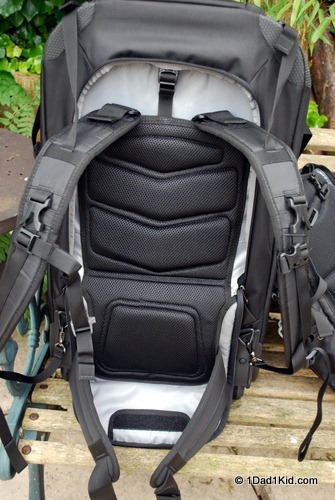 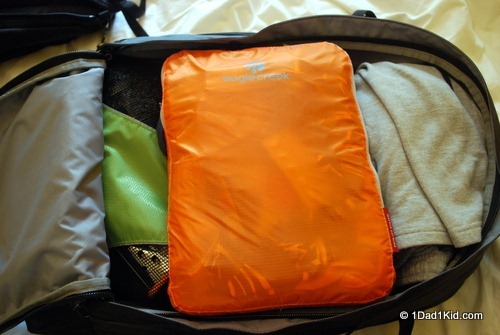 I also went up and down stairs while wearing it as a backpack as well as dragging it up the staircase by the extendable handle. Our stairs are a bit narrow, which was perfect for this test. The bag handled really well, and its profile is compact enough that getting between small spaces (like between a brick wall and a car) and navigating the narrow stairway went smoothly.

As it is a bit smaller than my suitcase, I was a bit nervous about it being able to fit everything. Since I use the cubes, though, everything fit really nicely without even using the space available in the daypack or the two external side pockets.

The wheeled backpack is water resistant and made of pretty tough fabric. Often the pull-up handle on a wheeled suitcase feels a bit flimsy or unstable, but this one moved smoothly and felt quite solid when extended. The Eagle Creek warranty is a “no matter what” policy, which I find extra reassuring.

After giving it a thorough test, the Switchback 26 gets the difficult-to-earn Talon seal of approval. I’d definitely recommend it.

Update: While using it more heavily for longer periods now, I have encountered two situations which might frustrate people.

There were a few other items I was intrigued by, and they sent me those to review as well.

RFID technology is finding itself in more and more use. It’s quite common for IDs, credit and bank cards, and transportation passes (like for the metro). One of the advantages of RFID products is also its Achilles heel—it can be scanned without being put through a reader.

This wallet has RFID-blocking technology to keep items from being able to be scanned while they are within the wallet. I tested it with a metro pass, and while other people could hold their wallet up to the scanner successfully, my pass could not be read. I’ve tried this in a few cities so feel pretty confident.

It also has a low profile. There are plenty of internal compartments for cards, passes, tickets, and, of course, money. It’s tall enough that really wide bills (some countries have large currency) still fit securely into the wallet. It’s a handy wallet to have.

I was most interested in this belt because it has a plastic buckle which allows you to keep it on while going through airport security. My jeans are too big to wear without a belt, so it’s nice to be able to keep that on to free up both my hands.

The fact that it has a hidden zipper compartment is just an extra bonus.

I’ve gone through several airports with the belt on, and I’ve had no issues with it setting off the metal detectors. The zipper is also easy to operate with one hand so you can get into the compartment without loosening or opening the belt.

I’ve been quite happy with it. 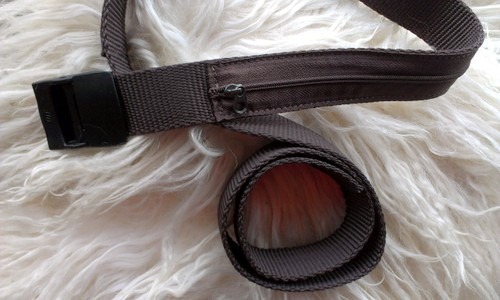 Tigger likes inflatable travel pillows, so I had him try out this one. He reports that it is quite comfortable. He’s also fond of the one-way valve which makes inflating it a LOT easier. It’s more comfortable than the horseshoe-shaped pillows as well.

He’s really picky about textures but found this pillow to be nice and soft. He gives it a 6 out of 10.

Has your travel list included a wheeled backpack and/or a pack with an attachable daypack? What was your experience?