We are nearing our 2nd month in Prague, also known as Praha in Czech. We originally figured we’d stay about a week. Yeah, life in Prague is like that.

Prague immediately grabbed me. Paris is one of my absolutely favorite cities in the world. While there are similarities, Prague has a different, relaxed feeling to it. It’s a big city that feels like a small one. And the fantastic and affordable transportation system helps it feel even smaller.

It’s no surprise I fell in love so quickly.

Being an international city, it’s so incredibly easy to find people who speak English. It’s to the point where I don’t even ask people if they speak English first. I just go up to them and start talking. I rarely ever encounter someone without even a basic level of English.

Which is a good thing since Czech is one of the harder languages to learn for native English speakers.

One of the things I love about Czech’s capital is the charming, old world feel combined with modern amenities. Unlike Paris’s metro, the trains are newer and the underground stations don’t have the faint-to-strong aroma of urine. The Prague system is also about one third cheaper than Paris. If you buy a month’s pass, it’s even less.

Cheaper is another lovely theme in the Paris of the East, especially if you get outside the tourist zone. We live in a 2-bedroom apartment on the outskirts of town. We pay just over $600 USD per month for our apartment, which also includes a washing machine, all utilities, and high-speed internet, and they do a thorough clean of the apartment every 2 weeks. We could certainly find something less expensive, though. Rent is quite reasonable here.

We spend about $100 USD on groceries per week, including alcohol, and that’s for 2 people (though not the alcohol), one of whom is a teenage boy. Occasionally we’ll buy some imported foods (like cheddar cheese), and naturally that will add a bit to our grocery bill, but it still isn’t too bad.

From what I’ve heard from some expats in long-term leases, utilities are quite affordable as well.

You don’t need a car. A month unlimited pass for the metro/tram/bus system is $33 USD; however, if you’re here for a while you can get a hold of an Open Card which makes it even cheaper.

Here’s a big win for families: If you have children younger than 15, the Open Card allows them to use the transportation system for free!

This is a very cultural city. There are world-class musical performances like orchestra and opera. And Praha attract big names. While here, Tigger attended his first concert when we saw Trans-Siberian Orchestra. Later I relived the pleasant parts of my middle and high school years by attending an outstanding, sold-out concert by Depeche Mode.

There are plenty of cinemas here, and we have been able to see newly released movies around the same time they’ve shown up in the States. Most of the time they are in English with Czech subtitles. After seeing a 3D movie in the IMAX theater, we decided we need to bring earplugs next time. We both had headaches from the loud volume. Thankfully, the non-IMAX theaters don’t blow your eardrums out.

Movie tickets aren’t cheap, but they’re less than the US as are snacks and drinks. We usually end up paying around $25 total for 2 tickets, 2 large drinks, and 2 medium-sized popcorns. And these are nice, clean, new theaters with comfortable chairs and reserved seating.

There are plenty of activities in town as well—Go-Karting, indoor skydiving, paintball, shooting ranges (you can even shoot an AK-47 if that’s your thing), and many more.

For many people doing long-term travel, there is a big need to be connected. I “work” online, so it’s important to me to have good access and good speeds. Tigger does his education online as well as keeps in touch with his friends. So it’s a biggie for us. Thankfully, it definitely is not a problem here. It is super easy to find free WiFi all over the city, and most accommodations provide free WiFi as well. If you are buying it for your home, it’s extremely reasonable.

I bought a local SIM through Vodafone since I had a good experience with them in Romania. A plan giving you 250 MB of data is about $30 per month. There is a daily plan where you don’t pay for data unless you connect to it. That gives you 25 MB a day and costs just over $1 per day of use.

Calls and SMS are pretty darn cheap. You can top up your account easily. There are places almost everywhere you turn selling cards. You can also top up online.

If you have a Czech phone, you can  buy your transportation tickets via SMS (although you can’t buy discounted fares with this method). The pass is cheaper, but if you end up in a situation where buying a pass isn’t the best plan, this is pretty handy and keeps you from having to make sure you have tons of change in your pockets, etc.

There are some great apps for getting around Prague, doing a self-guided tour, and so on.

Buying electronics is more expensive in the Czech Republic, so you probably won’t want to plan on doing that kind of shopping here. Many locals take the train into Germany to do their shopping for things like clothes and electronics and return the same day. 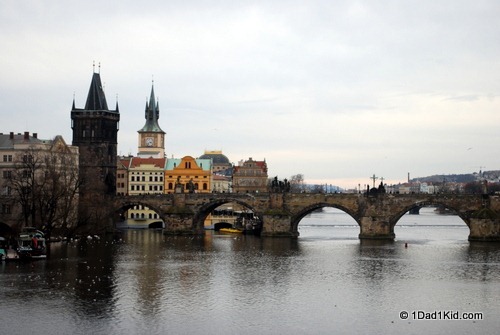 Prague basically has something for everyone. We’ve found good Chinese, Thai, Mexican (which totally shocked me), Italian, Spanish, and so on. It’s an international city, and you can find almost anything you’d want food-wise.

Have you heard the rumor about how beer is cheaper than bottled water? It’s pretty much true. And it’s good beer! You can also find beer virtually anywhere, and you won’t be judged if you ask for a beer at 11 AM. *cough*

Street food won’t be as diverse as places like SE Asia, but you probably would already expect that. Most street food fare will be sausages, hot dogs, and meat on a stick.

Czechs thoroughly enjoy the outdoors. There are plenty of greenbelts, gorgeous parks, bicycle paths (including a rather impressive bicycle pathway system leading all over the city, even into the suburbs), and so on. Prague is a very pedestrian-friendly city.

The city is also close to great ski areas for winter fun.

During the warmer months, you’ll find people rowing boats and canoes in the river.

Prague as a travel base

Trains within Czech are extremely budget friendly, clean, mostly on schedule, and just a pleasure to travel on. You can leave Prague by train and be in many wonderful locations (both domestic and international) within hours.

Prague’s airport also has a great selection of low-cost airfares.

Prague may not be “perfection,” but I’m going to say it’s pretty darn close!

Have you been to Praha? What’s your favorite memory?