Kuala Lumpur, a city of surprises

We first experienced Kuala Lumpur (KL) during a 6-hour layover between Paris and Koh Samui, Thailand. Our brief time checking out the city impressed me enough that I knew we would need to come back and explore it more. I had heard that it was a great place for food, and I loved the general vibe I felt while walking around. I had expected a grungy city with really only a couple of monuments to be of interest. Boy was I wrong!

The nice air-conditioned train ride from the airport to the transportation hub of KL Sentral also sported free WiFi. Not a bad welcome at all.

On our 2nd visit to KL, we traveled by train from Ipoh, another city we really enjoyed. By the time we left, we were seriously considering skipping Songkran festivities in Thailand to stay in Malaysia longer. Since Malaysia gives most visitors an entry stamp for 90 days for free (the best in SE Asia!), it’s an even bigger temptation to stay. 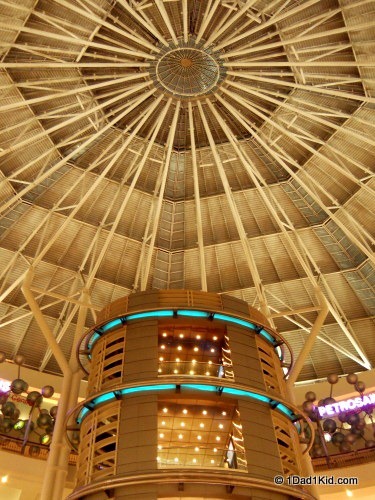 Be honest. You aren’t surprised this is the first category I’m listing, right?

KL is a wonderful place for food lovers. Malaysia is comprised of 3 ethnic groups, and the cultures have intertwined somewhat producing some excellent cuisine. Malay food has some very unique flavors. In fact, it’s the first time I’ve encountered a dessert containing dried shrimp.

Chinese food in Malaysia is quite varied. The descendants of the original immigrants to Malaysia from China are referred to as Nyonya. There are other groups of Chinese who immigrated later, and their food is different from Nyonya food, the latter focusing more on fresh ingredients and combining flavors. There is Chinese food, and then there is Nyonya food. Make sure to try them both. 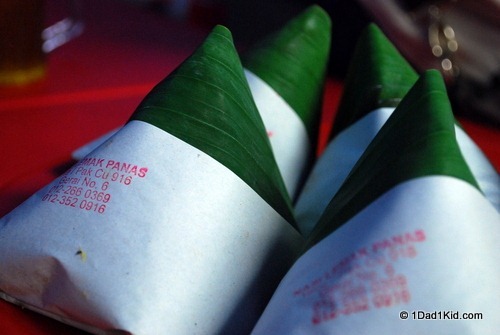 Because of the Tamil culture, there is lots of Indian food to be discovered in KL. The Tamil are from southern India, and the food is different from most of the Indian cuisine typical Westerners have sampled. Though, you’ll find plenty of that, too. Make sure to try some roti tisu in a mamak. 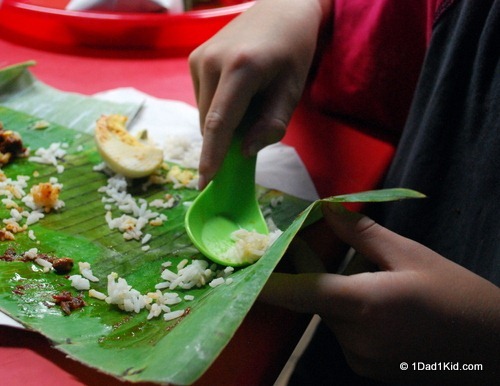 While in KL, I highly recommend taking Food Tour Malaysia’s street food tour. They offer a lunchtime “food walk” tour, but the nighttime street food tour (called “off the eaten track”) gives you cultural insights that shouldn’t be missed. You’ll get to enjoy typical food and drinks from the dominant Malay, Chinese, and Tamil ethnic groups. Just make sure to eat light during the day and wear loose-fitting clothing at night. You’re going to need a lot of extra room. Even my normally very finicky son ate almost everything we were served, including seconds of some of it. I can’t think of a more potent recommendation! 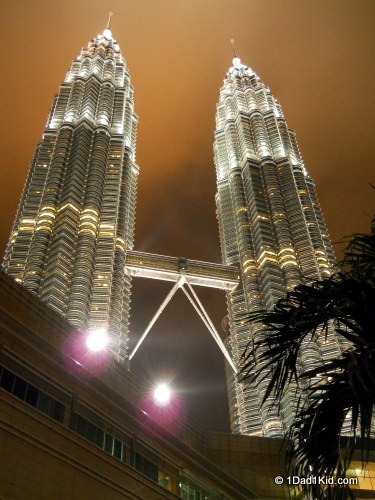 There is so much to do in KL! The following are just a few suggestions. There is really a lot to do in this city.

The iconic Petronas Towers are a sight to behold. At the base of the towers is a large shopping center. Outside this shopping center you’ll find a small lake. It’s really worth visiting the towers at night when they are lit up. In addition to the gorgeous towers, there is a water show that takes place on the lake at night. The water is lit with a variety of colors and dances along with music. It’s really fun to watch and is free. My favorite price!

While you’re at the towers, it’s worth visiting the Petrosains Discovery Centre inside the shopping plaza. Additionally, you can take the underground walkway toward the convention center where you’ll find the Aquaria KLCC. This is one of the better small aquariums I’ve been to. Tigger enjoyed it so much he gave it an 8-9 helicopters out of 10 on his trademarked “toy flying helicopter” rating scale. 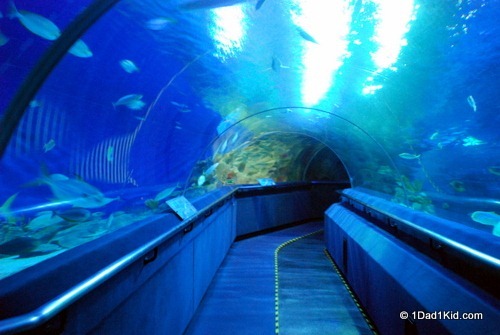 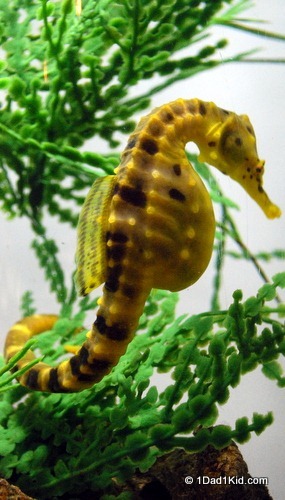 It can get quite hot in Asia, and especially so here. Because of the humid heat, you’ll find a lot to do in malls. Including at Berjaya Times Square, a good-sized mall with a New York City theme on some levels. Cruise around the indoor green area of Central Park before taking a trip through Tiny Taipei. But the real fun is upstairs where you’ll find an indoor amusement park, complete with a rollercoaster featuring a 360-degree loop. 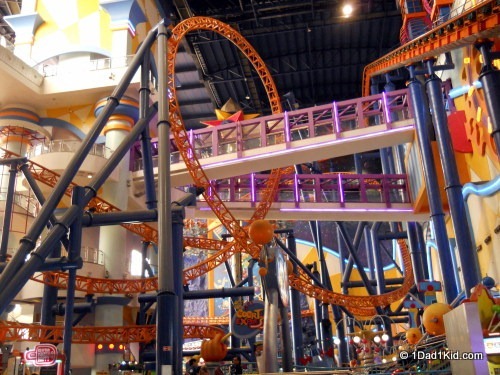 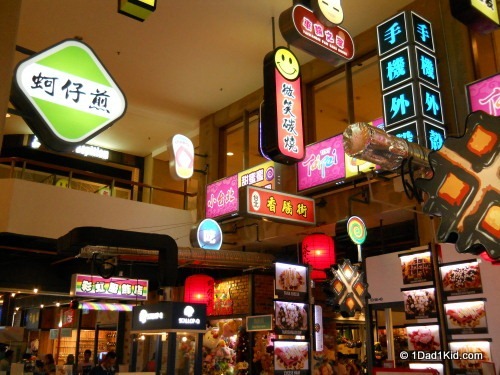 And, of course, you’ll also find amazing cinemas featuring plenty of new-release films. Unless it’s a local film, the shows will be in English with Bahasa subtitles. Movie tickets and snacks are incredibly low priced (how does $7 USD sound for 2 tickets with advance-selected seats, 2 large drinks, an order of chicken nuggets, a hotdog, and a bag of popcorn?) and offer some impressive luxury seating arrangements.

KL has a really good metro and monorail system which makes getting around the city quite easy. There are also commuter trains leaving from KL Sentral to most of the areas right outside the city limits, and often beyond.

Taxis are metered and easy to hail. Most shopping centers, and of course transportation hubs, have a taxi desk where you pay in advance based on your destination. If you despise having to barter with taxis, you’ll breathe a sigh of relief in KL.

Airport tip: There are a few airports in KL: KLIA is the large, very modern international airport; LCCT is the low-cost carrier terminal which is quite a distance from KLIA; and Sultan Abdul Aziz Shah Airport, which is another low-cost carrier terminal on the other side of town (accessible only by taxi or bus, but taking the train to Sentral first will save you money). Getting to KLIA and the LCCT is pretty easy by commuter train. It’s inexpensive and runs about every 20-minutes during peak times from KL Sentral. If you’re going to LCCT, however, you’ll have to get off the train at the penultimate stop and take a shuttle bus (included in your fare) to that terminal. Generally speaking, you can get from KL Sentral to the LCCT in as little as 45 minutes. Obviously, it’s wise to plan for a longer journey just in case. When deciding between the train or a taxi, make sure to account for KL’s very congested traffic.

You’ll find free WiFi in almost every establishment. Celcom also has a really great 3G network. Data plans are a bit on the pricey side, so keep that in mind if you’re a heavy user.

Make sure to bring an adapter for plugs. Malaysia has a unique outlet. Don’t worry if you forget to bring one, though. It’s rather easy to find universal adapters, and they’re inexpensive.

I think people tend to underestimate everything that KL has to offer and don’t plan enough time. We stayed for just over a week, and it really wasn’t enough time. There were still some great places we didn’t get to visit. I’d say give yourself at least a week if at all possible, but 2 weeks would be even better.

Have you been to KL? What were your impressions?