Spending time with a Hindu god

I wiped the sweat from my brow as sun gleamed off the immense golden statue. Today’s nemesis was located to the god’s right. I stopped to take a photo, partly to ready myself. I nervously glanced at the stairs as they disappeared high up the hillside. Not only did I dread facing the 272+ steps because I have bad knees, but I have become pretty out of shape. Sure I walk a lot, but that doesn’t compare to the training I used to do before travel when I was running ultra marathons of at least 31 miles, competing in duathlons, or riding my mountain bike for 102 miles on a road course. It almost seemed like the Hindu god looked at me in mocking amusement. I had premedicated myself with an antiinflammatory, and I reassuringly patted the pocket in my messenger bag that guarded my bottle of leftover Vicodin. Neither would help me cardiorespiratory system, though. 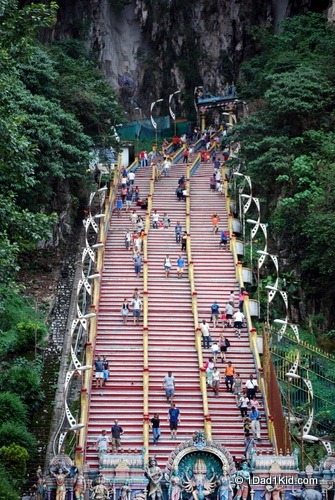 It was time, and we began the climb. I crabwalked up the steps, taking the pressure off the worst part of my knees. “Dad! There’s a monkey!” Tigger called out in caution, and I was grateful for an excuse to stop that wouldn’t make me look like a wimp. I sucked in deep breaths as I took photos of the monkeys curiously watching the humans huff and puff their way up the cement steps.

Damp brown faces smiled back at me in commiseration as together we turned our attention back to the painted steps. My muscles started to complain before my knees. Tigger bounced and hopped his way up the stairs in the way that makes parents wish they could somehow harness their child’s energy. Oh to have young, nonarthritic joints again.

Soon the top was in sight. “We’re almost to the top!” my child said gleefully, and I think sweetly as he knew I was probably in pain. I sardonically replied under my breath: This set of stairs. When I glanced back, I found Lord Murugan’s gaze firmly fixed upon the scene behind me, his mocking smile no longer visible. I turned my attention back to the one remaining flight of stairs and continued forward. At the top, I stared into the first limestone cave of the most popular Hindu shrine outside of India dedicated to the god of war and victory—Batu Caves.

After 2-1/12 years of continuous travel on 6 continents and umpteen different kinds of temples, it is hard to impress me. As I entered the second cave, though, I was filled with awe.

The shrines located within the caves are not superb by any definition. They are actually rather bland by comparison to other Hindu temples. But in this setting, one cannot help but be amazed. You feel small and insignificant standing inside the huge cavern. Sunlight filters in from above while monkeys run and jump among the rocks. Occasionally a loud crack is heard as a monkey throws a coconut down in its attempt to get to the sweet white meat inside. 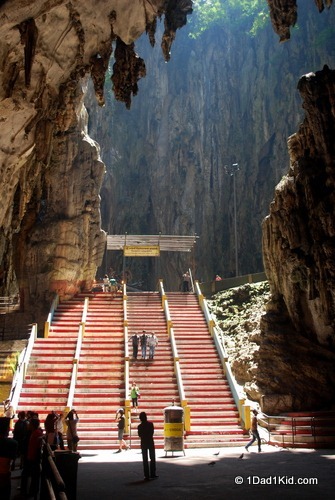 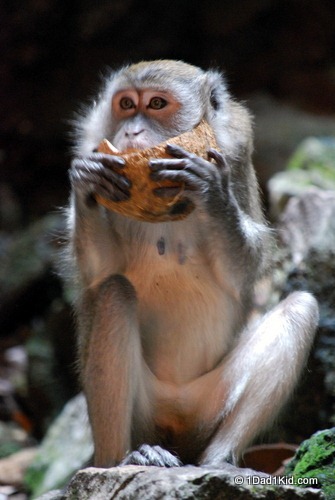 Smoke steadily rises from censers as sustained chanting emanates from within the shrines while a shirtless priest intones the proper prayer for the offerings from pious worshippers. You are filled with reverence, peace, and calm. Even the expressed glee from fellow tourists enchanted by the monkeys does not feel intrusive in such a place. Time seems to slow down and become unimportant as the spirit of the place infuses you.

For a moment I wish I was Hindu or at least had a better understanding of what was being done and said. 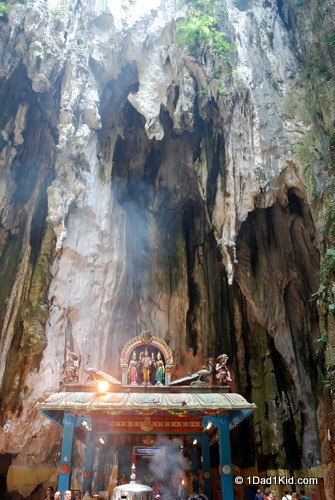 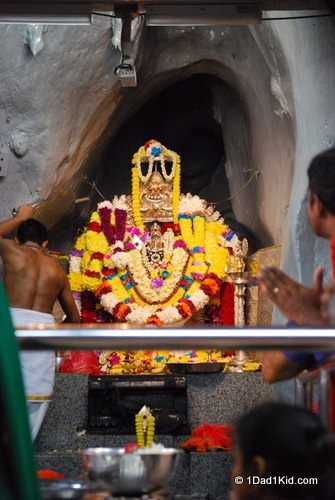 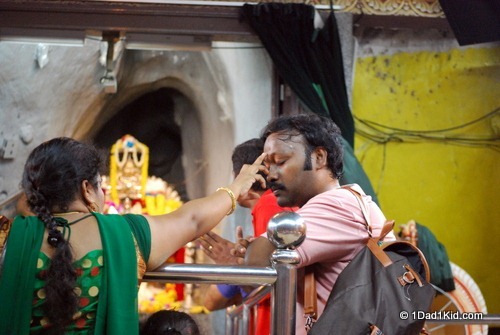 I generally loathe the pain and discomfort I am guaranteed after climbing lots of stairs, but today I feel no misery. Those 300 stairs were worth every moment I was able to spend here.

When I return to the bottom, I look back up to Lord Murugan’s face. This statue is, incidentally, the tallest one of him in the world. I see now his smile does not mock me. Instead we share a moment of understanding.

It seems he knew what I would find all along. 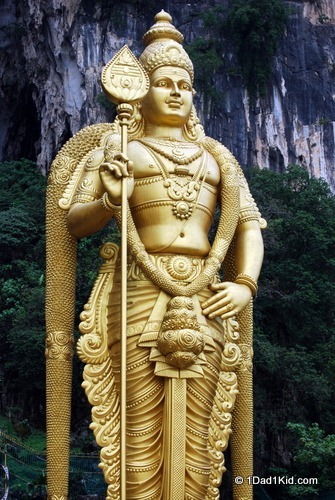 There is no entrance fee, and this site is incredibly easy to access. You can take a Komuter train from multiple places in KL. It’s located about 13 km (about 8 miles). We took the train from KL Sentral, and it cost 1 RYM (about 30 cents USD) one way. It’s not a long trip either, and the train is quite modern and air conditioned.

There are food and beverage vendors throughout the site, but you can also bring your own. A couple of the shops also sell fruit to feed to the monkeys. It’s kind of fun to feed them, but there is no hard sell. Just don’t try to hide food once you’ve pulled it out in front of them. Once they know you have food, they’re going to pester you. They generally stay in the 2nd cavern, so if you need to snack, do it in the 1st cave.

I would definitely recommend this experience while you’re in KL. In my opinion, it should be near the top of your list of things to see while here. It isn’t everyday you get to have such a great experience with a Hindu god. 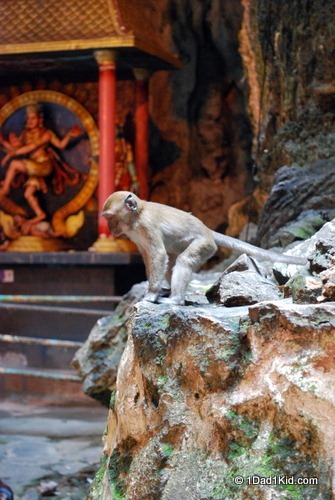