Is flying with Ryanair worth the savings?

Home » Europe » Is flying with Ryanair worth the savings?

If you’ve traveled around Europe, you’ve no doubt heard about Ryanair. Their very low fares are often a great temptation. They made a reputation for themselves for not only offering low fares but for charging fees for practically everything. At one point, I think there was even discussion of charging a fee to use the lavatory.

With all of the recent bad press, Ryanair has decided to make some changes to their policies. Rules for things like allowable baggage are now clearly indicated during the reservation process and are easily found on their website.

My experience with Ryanair

After a few years of reading so many complaints about them, I ran into a bit of a predicament—They were offering a killer airfare deal from the UK to Portugal. It was significantly lower than any other airline or destination. I decided to bite the bullet and give them a shot.

When I made my reservation, I paid careful attention to all the fine print. I was surprised that things weren’t hidden like I had read about. In fact, it seemed like they wanted me to be aware of any fees.

On the day of our flight, I was quite nervous. We were flying with only carry-on luggage, and I had heard that Ryanair can be quite difficult about luggage. There are many people who have shared experiences of having all baggage carefully measured and weighed, and any overages were exorbitant.

Even though we had checked in online, non-EU passengers have to have their boarding pass stamped. This was a bummer as it meant we had to stand in line even though we had a boarding pass and weren’t checking bags. However, the agent was friendly, didn’t weigh our bags, and we were on our way without incident.

I let out a deep sigh of relief as we walked away, but I knew we still had to get past the gate agents who apparently are notorious for deciding something exceeds their limits and dinging you with a huge extra fee.

But we encountered none of this.

The leg room on the flight seemed about average, and the flight attendants were quite friendly and helpful. Actually they were some of the nicest we’ve had.

When it was time for another flight, once again Ryanair showed up as being the cheapest. I decided to give them another go and had a similar experience with one caveat—the flight landed 20 minutes early at our destination. Yeah, no complaints there!

When they showed up as being the cheapest option for our next flight, I didn’t even hesitate to book, and once again we had no issues. 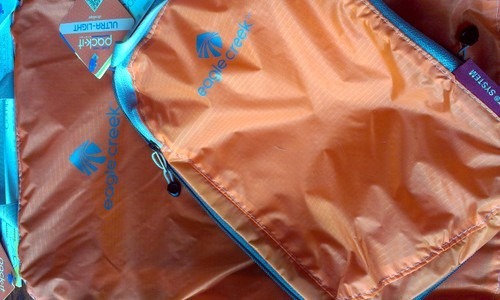 I decided to reach out to some other travel bloggers to find out their experiences. Here are some of the good and bad they shared.

Heidi of Wagoners Abroad had the following to say: “We have flown with Ryanair a few times as a family of 4. We found that if you follow the rules, the process runs smoothly. The seats and plane amenities are very basic and budget, but they have great ticket prices and you can’t beat that.

“My husband is 6’5″ and he does have a difficult time being comfortable on the flight. It seems as though the seat width and leg room distance is slightly smaller than a standard airline. With that said, that slight difference makes all the difference. He would prefer not to fly them on any flight length longer than 90 minutes. That is about all his comfort threshold can handle. For the rest of us, it was fine.”

Ashley of Amsterdam Blog was left with a sour taste after this incident: “I was flying back to the UK from Amsterdam and when checking our bags in my friends and I got charged (something like €30). When I asked her what it was for, she got annoyed, and when I told her that we hadn’t paid on the flight out there the customer service lady offered to charge me for that too. I was so angry that I haven’t flown with them since.”

Fellow single-parent family traveler Theodora of Escape Artistes had this experience: “All low-cost airlines need to keep costs down, but my experience was that they were aggressive, and the CEO makes no attempt to hide his contempt for his customers. They tried to charge me €60 because their machine couldn’t read the boarding cards I’d printed out. Then I had to repack everything at the boarding gate so that my handbag fitted into my carryon.” [Note: This policy has changed, and handbags don’t count as your carry-on anymore.]

Dale from the Angloitalian blog shared this interesting observation: “…perhaps some people demand too much from low cost airlines (that they should be getting the same service and conditions that you’d expect from the big companies) just because they’ve seen it on TV or in films that you get treated like royalty on a flight. You get what you pay for, and if you pay little you should expect little. All I want is to get from A to B with Ryanair, I’m not expecting anything more than that. No need to butter me up with niceties or free drinks, just get me there.”

Tips for flying with Ryanair

There were a lot of mixed comments from people about their experiences, but some solid tips emerged from the discussion:

Have you flown with Ryanair? What was your experience?