How to Have Fun in Montevideo

Home » Uruguay » How to Have Fun in Montevideo

Not nearly as visited as its much bigger neighbours Argentina and Brazil, Uruguay is a country that actually has a lot to offer to travellers. Most people who visit it for the first time are really surprised at how beautiful a country it is. It was the same for me—I  really fell in love with it, with its incredibly good vibe and relaxed and charming people, and I hope I can visit again soon.

One of the places I enjoyed the most has been Montevideo, the capital as well as the most populated city in Uruguay. I only spent a few days there, but they were all packed with activities that kept me well entertained. Here is what I did to make sure I had a great time there.

Walk around the centre of town

I love the contrasts I can experience in the centre of Montevideo, where right next to the modern offices of downtown there are the old buildings of the historic centre. I particularly like walking through the Puerta de la Ciutadela – one of the few remnants of the colonial city which has been demolished in 1833 – and then sitting around Plaza Indipendencia, and from there admire the Mausoleo de Artigas, Uruguay’s independence hero, and Palacio Estévez, which used to be the government building until 1985.

I am not exactly a football fanatic, yet I had the feeling that watching a futból game at Estadio Centenario would be fun, and I was not mistaken. Uruguayans – like pretty much all people in South America – are crazy about football, men and women alike. They can spend hours explaining why a particular action was not offside. I went along with some friends to support Nacional and had a blast. Peñarol supporters were not happy with my choice of team, but hey I don’t really understand much about football anyways!

Vegetarians may shriek at this, and the OMS may want to warn me that eating red meat is bad for my health, but I confess that I love it. Eating asado is actually a cultural tradition in Uruguay, and I am all about culture you know. So, I went to the Mercado del Puerto, picked a great parrilla (barbecue) and ate some asado de tira (ribs) and pulpo (fillet), with roasted vegetables, all accompanied with some chimichurri sauce (a garlic, parsley and olive oil sauce).

Uruguay actually has some really good wines, which have been produced there for over 250 years. I promise, I only had wine because it taste good when having asado!

Well, I did not dance dance, but I went to see a dance show. Montevideo shares the title of “birthplace of tango” together with Buenos Aires, and both have been given the UNESCO title of intangible cultural heritage for this. There are many milongas with good tango shows.

Join the fun of the Carnaval

I was surprised to find out that Uruguay has the longest Carnaval of South America. It last 40 days! So, I went to see the Desfile de las Llamadas – an all night long parade which is accompanied by the drumming of candombe. This is an instrument that has been brought to Uruguay by the African slaves in the 18th century. There even is a Museo del Carnaval in Montevideo, which has a great collection of costumes and musical instruments and pictures which document the history of the Carnaval of Montevideo.

Walk or bike on the Rambla

Montevideo’s waterfront is the perfect place to spend a relaxing afternoon. I loved biking along it and pretending to be a local, carrying around my thermos of “mate”, a bitter tea made of dried and chopped up yerba leaves.

I can definitely see Uruguay growing as a tourist destination. That is why I think it is better to go as soon as possible!

Have you been to Montevideo or Uruguay? What are your favorite things to do, eat, and/or see? 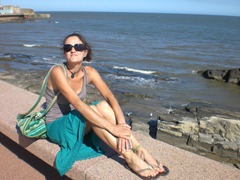 Claudia is from Cagliari (Sardinia) and is obsessed with travelling. A former human rights lawyer and academic, after devoting her life to the protection of cultural identity, in November 2013 Claudia decided to give in to her biggest passion and started travelling around Latin America, and she has hardly stopped since. Blogging came as a natural consequence, for Claudia wanted to let her family and friends be updated with her adventures. You can follow Claudia’s adventure on her blog, via Facebook, Twitter, and Instagram.