We were missing Prague before we even left our apartment for the airport. As I always do, I checked both one of my favorite travel apps and online to make sure there were no delays for our Wizz Air flight to London. Everything looked good, and so we began our hour-long journey to the airport, one that would have us using 2 different buses and metro trains.

As we arrived at the airport, I smiled at how fluid everything had gone. Once we found out where the check-in was located so we could drop off our bags, I smiled again. They were in the process of opening the window, and we were the very first ones in line. This was going to be a piece of cake!

We had recently done a cull of stuff from our suitcases, and the result was that my luggage was 5 kg lighter. I was quite happy about that! Until I heard the following words:

“I’m sorry, but there is a delay. Here are some food and drink vouchers.”

A delay? What happened in the last hour to make that happen? “How much of a delay?” I asked. Her response was to shrug her shoulders and say “2-3 hours.”

That was rather bizarre, I thought. Then I looked at the amount of the vouchers. We each were given about $6. A “special deal” consisting of a pretzel and a coffee is over $7. I just rolled my eyes.

We stopped and got something to eat. We checked the monitors, and they showed our flight was leaving on time. I went to the information desk and double checked. Yes, there was still a delay. “Why don’t the monitors show that? It’s confusing to see it’s leaving on time when it isn’t.” She just shrugged.

Wizz Air hadn’t advised anyone else of their change in schedule. The airport’s system, a flight status website, etc., all showed the flight was leaving as scheduled. They also had my mobile number for an SMS message. None was received.

We continued to wait for some update. Eventually we heard an announcement passengers should go to the information area to get vouchers. We already had ours, but I figured they would have an update.

And I was wrong. “Some time after 17:00.” I thought it was rather odd for an airline to not have any clue when their plane was going to depart. I explained that I had bus tickets from the airport and the delay would put me past the grace period meaning I would most likely lose my $20 ticket. “Can we get reimbursed if that happens?”

“You’ll have to ask in Great Britain. Next!”

Well [insert appropriate obscenities] to you, too!

We walked around and discovered the Rest and Fun Center. We decided to check it out and ended up paying 12 EUR (about $16 USD) to have our own private lounge for 2 hours. The lounge had to two comfortable couches which can fold down to act as a bed. We had a private en suite bathroom that even included a shower and towels. There was an Xbox and a flat screen TV for Tigger. There were plenty of outlets for plugging in devices, and they also offered free, fast WiFi. In the lobby was a machine for free coffee, tea, and hot chocolate, and they had other beverages and food for sale.

I can’t tell you how nice it was to be able to kick off our shoes and just chill in our own comfy space for a couple of hours. 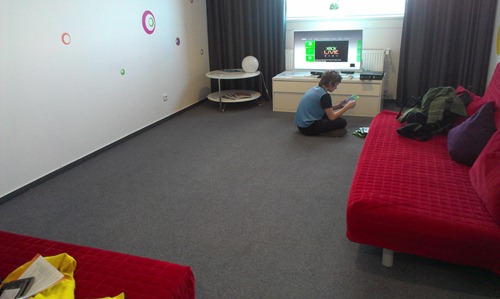 Two hours later, the monitor changed and indicated the gate was now open. The departure still hadn’t been updated, however. We went to the gate hoping they would soon be boarding. “What time is departure?” I asked the ticket guy. He shrugged and said “17:00, 17:20, 17:30. . . “

So you’ve opened the gate but still have no clue when we’re leaving. Interesting.

I sat down and visited with some friendly Brits. I reviewed our boarding pass to find our seat numbers. There were none. One of the people I had chatted with was no veteran to flying with Wizz Air so I asked him, “There are no seat assignments?”

“No. It’s open seating. So you’ll want to move through the crowd quickly once you’re off the bus.”

Finally the bus arrived to take us to the plane. We were packed in like sardines, the doors were shut, and we were left locked in for at least 15 minutes. A couple of the claustrophobes in the bus were getting restless with one exclaiming, “I’m about to explode!”

We all cheered when the bus finally pulled away. Once we arrived next to the plane, everyone huddled at the doors. We were all ready to sprint and shove our way through to get a decent seat.

But the doors remained closed. For another 15+ minutes. Thank goodness it wasn’t summer, because it was getting steamy enough inside the bus as it was.

I had instructed Tigger to use his size and speed to our advantage, and when the doors opened he shot through and deftly moved around the obstacle course made from humans. We ended up in row 5 with an empty seat between us (and that was only because they had reserved the first 4 rows and wouldn’t let people sit there). Well done, lad!

The flight itself wasn’t bad. Prices for drinks and snacks were reasonable for an airline (2 EUR for a can of soda), and the crew were at least not icy.

Thankfully, UK Immigration was a breeze (which is not always the case), and since the waiting bus driver was bored with an empty van, he accepted our tickets even though we were past the grace period. I was so happy to not have to buy new, more expensive tickets!

Per my waiting area friend, Wizz Air isn’t usually this incompetent and chaotic, but I have to say after our experience I’m going to do my best to avoid flying with them again. 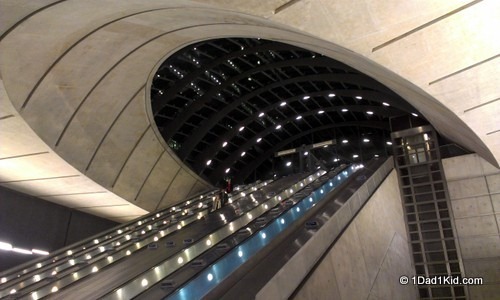 Delays happen with travel, but in my experience they’re usually handled more efficiently and with better communication. And there was no excuse to leave people locked in a bus for those periods of time. That could’ve been handled much more efficiently as well.

Have you flown with Wizz Air? What was your experience?