Essaouira, breaking from the chaos of Morocco

Home » Morocco » Essaouira, breaking from the chaos of Morocco 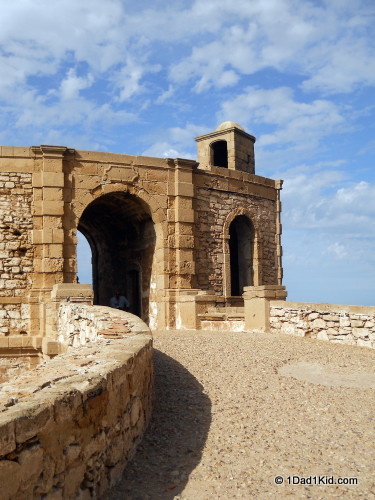 Morocco is an amazing country.  It challenges you, amazes you, stuns you, and brings you through so many other emotions.  After time in Tangier, Marrakech, and other areas, like Fes, it’s important to go to other places to get a feel for the less chaotic side of this north African country.  After a few days in Marrakech, we were ready for the coast, and we headed to the coastal town of Essaouira (pronounced sah-wee-rah).

It’s easy enough to get to this almost sleepy town from Marrakech.  It’s a few hours by bus which includes a 30-minute rest stop with bathrooms (none on the bus) and where you can buy hot food.

If you’ve been to one of the other popular areas, you probably think you have the whole medina navigation thing mastered.  Well, just when you think you have Morocco figured out, it laughs in your face and says “Oh really?” We got through Marrakech’s labyrinth without a hitch, yet it took a few times of getting lost in Essaouira’s medina to take my pride down a notch or two.

Where Marrakech’s medina and square are colorful, Essaouira’s is much blander.  There are clear areas where the tourists tend to gather and where the locals do their shopping.  Street food is abundant.  The people watching opportunities are absolutely wonderful.  This town shuts down fairly early, and the medina will calm down much earlier than in the big cities up north. 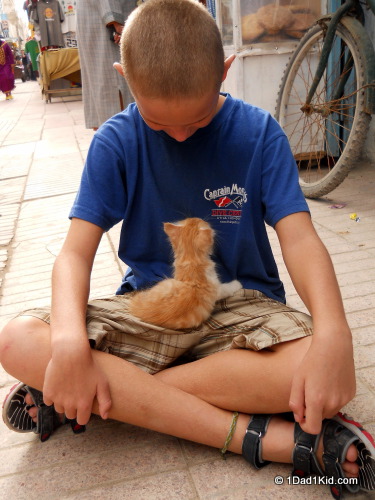 I love the sheer joy on his face

Finding lodging is pretty easy.  There are usually people at the bus stop who will offer to rent you a flat.  Many of these are in the medina.  Having spent a lot of time in the medina, I don’t recommend living there.  Especially if you’ve already had experience dealing with the chaos of Morocco.  We rented an apartment through AirBNB, and it was perfect! We were in a neighborhood of solid locals, which I absolutely loved.  The one down side was being closer to the mosque speakers so you got a little early wakeup call before 6 AM every day as they issued the call to prayer.  It was easy enough to fall back asleep, though.

We were here in the off season which meant the beaches were amazingly uncrowded.  Most of the people were either locals or Moroccan tourists.  The water is chilly, but that didn’t stop Tigger.  If you come to the beach with kids, make sure to bring dry clothes because when they finally exit the surf, lips blue from the cold, they’ll want to change into something dry quickly.  There are plenty of chaise loungers for rent.  Feel free to haggle the price down.  They initially wanted to charge me 40 MAD.  Since it was low season, I was able to get them to give me the more reasonable price of 15 MAD.  Whatever you pay, you get the chair for the whole day.

Essaouira has so much charm in it that it’s easy to see yourself staying longer.  Just make sure to give yourself plenty of time to explore the medina’s nooks and crannies.  And you’ll want to bring your camera.  It is one incredibly photogenic area.