This post may be coming a bit late, or early depending on your point of view, but I know many people have wondered about how we celebrated the holidays in our first year of life as full-time nomads.

Our birthdays were generally not your average celebrations compared to being back home.  My birthday was celebrated by going to Tikal, the wonderful ruins in Guatemala.  Tigger’s was probably a little more exciting as he finally got to begin his open water diver course (“After like a million years!”).  We also had some special friends who were on Utila and shared in celebrating his special day.

In November we celebrate his Forever Day, that’s the anniversary of when his adoption was finalized.  This year was really exciting in that we had another new friend who became family with us.  We went to a nearby island, and all of us got to go shark diving together.  Not many kids can say they celebrated their Forever Day by diving with sharks.  With his certification and his age he is restricted to 12 meters, but since I’m an instructor they overlooked that and let him do the 21-meter dive anyway, something we were all quite pleased about.  He also got to do his very first night dive, something else he had been very desirous of doing. 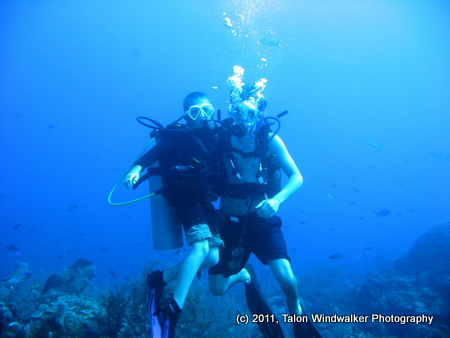 Thanksgiving was very different for us.  Usually I have either cooked up a storm and invited people over, or we’ve joined “family by choice” and celebrated with them.  Well, turkeys were extremely expensive on the island ($50), so I wasn’t cooking one.  We instead ended up eating at a bar that was serving an American-style dinner and had most of the usual fixin’s.  Later we were invited to join the dive center staff, where I was a freelancer, at the owner’s home for a big dinner, so we ended up celebrating with friends which made it all feel a little more normal.

We celebrate a different type of winter holiday.  During most of my childhood we celebrated Hannukah.  The first time we celebrated Christmas was when I was 14 because of my mother’s husband.  At that point I didn’t care what we celebrated.  When I was on my own Christmas was really too painful since I had no family to celebrate with.  Friends were always good enough to invite me to their homes, but it was hard to sit around and listen to family remembering things, sharing laughs, picking on each other, etc., and be so outside of it.  When I began working in healthcare, I was usually the first to volunteer to work for the holiday.  Most people thought it was an altruistic gesture and didn’t realize that it was just to avoid the day in any way that I could.  I used to say that if I could sleep from the day after Thanksgiving until New Year’s Eve that would be just fine.  However, when I was going to become a parent that changed things a bit.  Tigger spent his first years of life in homes that celebrated Christmas, I celebrated Hannukah or the winter solstice, and so I decided we would start our own holiday and traditions, and thus Chrismakah was born. 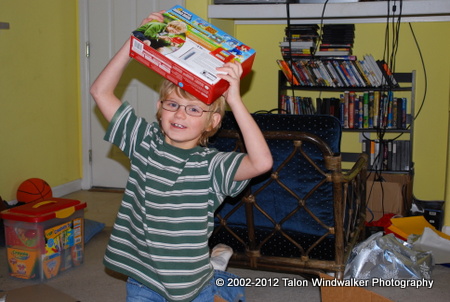 Every year Chrismakah has evolved.  After our rather anticlimactic experience with Thanksgiving on Utila, one of my most favorite holidays, I was determined to have a different experience with Chrismakah.  Luckily we ended up heading to the mainland so I could refill my meds.  Having to occupy our time in the mall since the ferry wouldn’t return for several hours, we ended up in the grocery store where I joyfully discovered turkeys at a reasonable price.  We were in business!  So we crossed the Caribbean waters with ours bags filled with a frozen turkey, a package of Snickers, a roasting pan and bags, and some other items to celebrate our first international Chrismakah.  I was overjoyed.

Then things got even more interesting.  The local supermarket, Bush’s, had a raffle.  Every time you spent more than 500 lempiras (about $25 USD), you were automatically entered.  Two days after shoving my turkey into our tiny freezer I received a call from a number I didn’t recognize.  Guess who had won the raffle.  And it wasn’t just a huge turkey, it was all the traditional fixings, including canned pumpkin for a pumpkin pie!  The travel gods were making up for Thanksgiving BIG time.

Tigger and I discussed our current tradition.  We had no menorah to light when Hannukah began, and I wasn’t going to buy a fake tree for Christmas either.  We discussed our dinner and if we wanted to add any local culture or something like that to it.  My darling son had the most brilliant suggestion:  We should have bacon and macaroni and cheese (which he’s convinced is a food group) as side dishes.  It was decided right then and there as we walked down the cement road of our island home that those two items would become part of our annual tradition.

Next came the other interesting piece of preparing our dinner:  We had a tiny oven and a tiny propane tank.  I hoped that we would luck out and have enough propane to cook our turkey AND our pumpkin pie, which incidentally necessitated being housed in a graham cracker crust instead of the prior year’s butter-laden Julia Child crust.  Once again the gods smiled upon our festivities and the propane held out.  Unfortunately, they were not as thoughtful when it came to Tigger’s stomach, and he ended up with a virus so I enjoyed our wonderful Chrismakah dinner alone while he slept in the other room.  We ended up having two Chrismakah dinners since there was so much food and only two of us eating, so it all worked out. 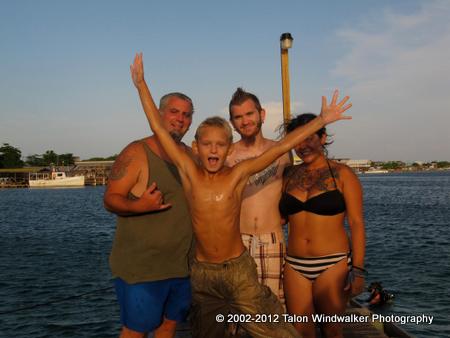 I’ve always looked forward to New Year’s Eve.  I love getting together with friends and celebrating all the excitement that a new year promises.  This new year was even more exciting since I wasn’t eager for a crappy year to hurry up and get over with.  Our friends, mostly being younger, single, and childless, had plans that entailed drinking copious amounts of alcohol in bars or at beach parties.  So instead we enjoyed a special dinner together and watched the ball drop in New York on TV.  Then when it neared midnight, we headed to the dive shop where we ascended the narrow stairs to the upper deck at the end of the dock and watched the fireworks up and down our tiny island, and even from across the harbor as the people on the cays celebrated.

It was a special moment.  We had ended an exciting year and gladly looked into the face of 2012 wondering what new adventures it would hold.  Just me, my amazing son, and the night watchman staring at the exploding colors in the sky. 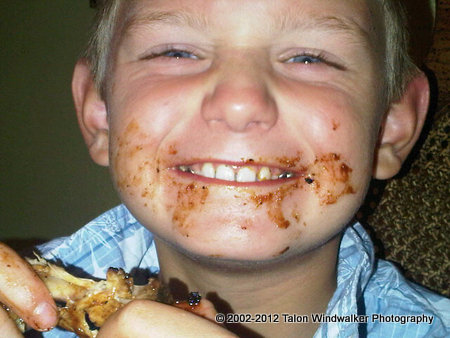 Tigger is a big fan of Dad's homemade BBQ sauce

The other holidays have been much more muted.  Once again we’ve spent a Memorial Day without the traditional American BBQ, without sitting with friends by the pool as our kids frolick in the refreshing water, and soon another Independence Day will pass without fanfare, ribs, and corn on the cob.  Which is a small price for the life we have, and I honestly wouldn’t trade it for anything.  Pumpkin pie with a graham cracker crust and all.