A hotel owner’s life in Hanoi

We had been in this small hotel for a couple of days. I enjoy this area because it’s full of daily life in Hanoi, even if that means it’s also really noisy.

We came downstairs for breakfast and were greeted by the owner as usual, but this time I noticed his eyes appeared bloodshot. His movements lacked their usual energy, and the smile that was almost always on his face was noticeably absent.

As we began eating, I asked if he enjoyed running a hotel. When I was growing up, the person who gave birth to me had managed hotels. Well, she checked people in and ordered things. I did the rest. I have a deep appreciation for how tough it can be.

I said nothing hoping that he would continue.

“It can be hard,” he admitted.

That made sense to me. I’m sure a hotel charging $100 a night might pay its front desk staff better than a small place charging $15.

They are both from the countryside but moved to the city for school and for better job opportunities.

“Do you live here, or do you have a separate home?” I asked. I’ve seen both he and his wife here during different stretches of the day, and they have an almost 2-year-old child, too.

A weary hand swept over his face. “We live here,” he replied with an added measure of exhaustion.

“So you never really get a break.”

He almost chuckled. “No, there are no breaks. We both do 4 or 5 jobs around here,” his hand sweeping outward indicating the neighborhood. “We work every day, and it’s often 20 hours of work.”

“Twenty hours a day!” I repeated.

He nodded his head, forcing his drooping eyelids open as he continued. “Last night I went to bed at 2, and I was up at 5.”

“There is no break,” he said softly. “There is no holiday. Once, a year ago, I went to visit my father on his land, but that was part of the day. There is no whole day off.” 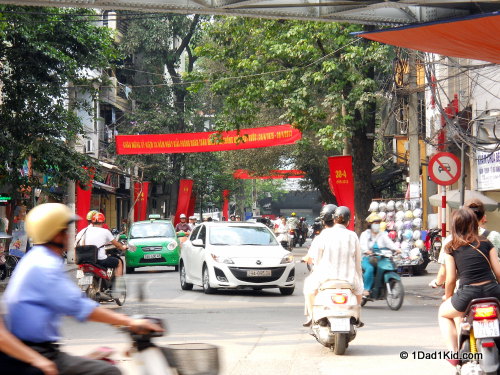 “Do you enjoy living in Hanoi?” I asked.

His smile and distant gaze told me more than his words. “We worry about life here. There is more violence among young people. They watch it on TV, and they want to try it. It’s too easy for them.” He pauses before continuing. “And the food is not good. There are vegetables, and no poison is used, but the people are small. They eat more meat, but they are still small.”

There’s probably enough food, but it isn’t good enough to provide the nutrition they need. As we walk around, I do note the lack of fruits and vegetables that we’ve seen in other Asian areas. A friend explains to me that it is hard to grow food in the north. The main agricultural area is in the south.

Our brief conversation remained with me the whole day and into the next. Curious, I researched and discovered that the average monthly income of a person in Vietnam recently “surged” almost 20% to a whopping $150 USD per month. Utilities can easily take a third of that.

A popular relocation website lists the average monthly rental of a 1-bedroom apartment in the city center to be about $50 a month more than what a person usually earns.

As I write this, I glance around our hotel room with its walls that by typical Western standards are in serious need of a paint job. Scuff marks cover much of their surface. The base of the walls show signs of water damage, and mold is visible in the tiny bathroom. Street noises penetrate the ill-fitting windows as we endure a long power outage.

But, I feel as if I’m sitting in the lap of luxury.

In the States, I made more in an 8-hour shift than the average Vietnamese will make in an entire month.

To say I feel humbled would be an understatement. I can’t even feel annoyed at the loss of power, which also means no Internet access, and therefore no work.

Hours later it still isn’t working. This is life in Hanoi.

Travel teaches me a lot of things.

It also makes me incredibly more grateful for my amazing life and the life I can offer my son.