Our journey out of Asia had us stopping in Sri Lanka for a 15-hour layover en route to Italy. That’s an incredibly long time to be in any airport. A transit visa (maximum of 2 days) is free and can be obtained online, so we decided we would escape the airport and check out Colombo.

There are multiple methods available to get from the airport to the city. In doing some research, they discouraged taking the train due to an irregular schedule. The idea of an hour-long ride, or more, in a non-air-conditioned bus in tropical heat did not appeal to me, so we arranged for a taxi at one of the multiple desks in the arrivals area. These were the most annoying touts we encountered in Sri Lanka. We went to the center of town, and the charge was 2900 LKR (about $22 USD) for an air-conditioned taxi (you’ll be asked if you want AC or not).

If you aren’t used to rather . . . interesting driving, I highly recommend not sitting in the front seat. I’m used to highly erratic driving, and I was still clenching my butt muscles several times as we narrowly missed accidents several times.

This area of Sri Lanka can be easily described as “India Light.” The roads are extremely congested, and it will take at least an hour to arrive in the city.

There are a few different sights to see in Colombo; however, after hearing from others how much foreigners are overcharged we decided to forego those and just explore the area on foot.

The people were quite friendly, and it wasn’t too difficult to communicate. Most of the shops had employees who spoke enough English to make it work, and of course pantomiming can be quite helpful.

We encountered some great street food, and we stopped at a gelato place to escape the heat and take advantage of the WiFi while we cooled down. 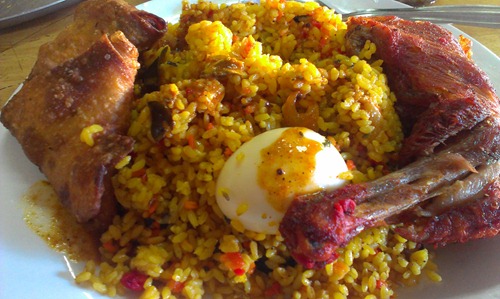 After doing some online investigation, I discovered the train does actually have a regular schedule, and it’s quicker than taking a bus or taxi, as well as being a LOT cheaper (360 LKR or about $2.75 USD). We decided to take the train back to the town where the airport is located. The train stop is located about 2 km from the airport, so you can either walk, grab a tuk-tuk (or 3-wheeled taxi), or flag a taxi.

Colombo really isn’t a place I would bother with unless you were in a similar situation. Sri Lanka has some really beautiful areas that would be much more worth your time if you’re planning on spending more time there.