Where is all the beauty in the world?

Home » General Travel » Where is all the beauty in the world?

While I’m a big fan of keeping current on things happening in the world, I sometimes have to take breaks from the news. As I sit here writing while Tigger frolicks in the waves, a black kitten plays with my foot, biting on my toes with sharp needle-like teeth, and clouds slowly consume the mountain out my window, I have to wonder why we don’t get more representation for all the beauty in the world. 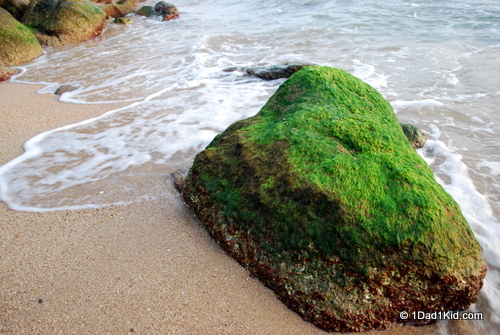 There is a huge, wonderful world out there beyond the LAPD shooting at innocent citizens as they search for a suspect, explosions and riots taking lives, North Korea doing another nuclear test, etc., yet we’re lucky if we hear anything about it.

In between the sad and horrible, is found a world full of amazing, caring, and giving people. And often the ones who have the least share the most.

Yesterday I was reminded of this yet again. 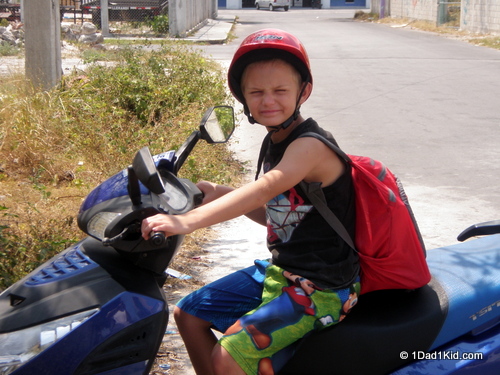 The other day I was walking the scooter across the busy street to get the flat tire fixed. I didn’t want to ride on it because I was afraid of damaging the tire. As it’s a bit uphill, I stupidly decided to have the engine running and opened up the throttle a bit for an assisted rapid crossing. Unfortunately, I opened it up a bit too much, and I ended up skidding across the ground a short distance.

As I stood up laughing at my stupidity, I grabbed the bike and quickly got out of the street. The lady in the shop came running and was quite worried about me. I told her I was fine as I quickly examined myself. I had a couple of scrapes and a rather large hematoma on my shin, but no big deal. She ran and got an older man who insisted on cleaning my wounds. Despite telling him I was fine, he would NOT take no for an answer, and I ended up sitting down and letting him swab iodine on my few scrapes.

Yesterday, he was looking for someone among the complex of bungalows where we live, and he greeted me. Barely speaking English, he insisted on checking my now mostly healed wounds. He conveyed so much caring between his facial expressions and sign language (Did you get a shot? How about pills?) that I was extremely touched.

As I mused about this on our Facebook page, I remembered being in Cuba. We were exhausted. It had been a long day between the flight, taxi ride, finding our place, getting settled, etc. We were starving. The guy we had connected with via Couchsurfing (it’s illegal for a Cuban to invite you to stay with them unless they’re licensed, but many Cubans are on Couchsurfing to connect with people) walked us to a restaurant so we could finally get some food in us.

Cubans LOVE children. I smile as I remember sitting in the restaurant while our server hovered as she watched Tigger try to cut through his meat. She offered to help a couple of times, and I reassured her in Spanish that he could do it. She stepped away from the table for a bit but could no longer stand it. She rushed back to the table, took his silverware from him, and quickly cut his food for him, apologizing as she walked away after finishing. 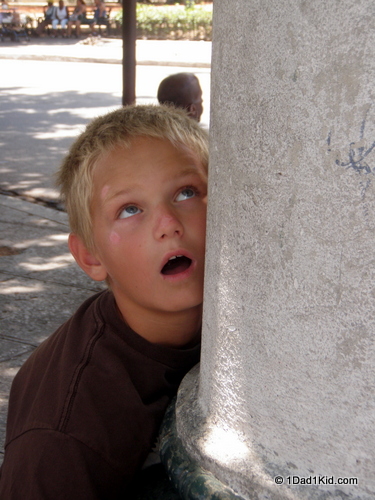 Another time while walking around exploring, I had a very thirsty kiddo. We hadn’t found a place selling water yet, so I stopped and asked someone where I could buy water. Rather than lazily point off in the distance, he guided us around in search of a store. When he spotted a man sitting on a doorstep, he stopped and told the man “The boy is thirsty.” The man jumped up, went inside, and returned with a glass and bottled water.

A woman couldn’t stand the sight of Tigger sitting on the curb while balancing a plate of food on his lap, so we were ushered into her home. She also refused payment for the food we had ordered, and we were told quite seriously that if there was ANY problem, we were to return to her home.

On Utila, Tigger got sick and vomited while walking to the store about 30 meters from our home. Two men came to his aid and ushered him home. I heard one of the men screaming at his wife to call the dive shop where I worked to let me know Tigger was ill.

In the Philippines, there was a young man who desperately wanted surgery for his cleft lip. I was with a group performing these surgeries. He walked for 3 days to get to the hospital. Upon arriving, he discovered he was early. He knew no one and had virtually no money, so he found a corner in the hospital and tried to go unnoticed as he slept in the building. People found out why he was there, and they made some calls. A couple picked him up and took him to their home. They were at his side during the overnight preop stay and hovered outside the OR doors like every other worried family. They were total strangers the day they got the phone call. They brought him food, fed him, and fanned him with a piece of cardboard during the heat of the day when the large, portable air conditioner couldn’t keep up with the ward room filled with people. 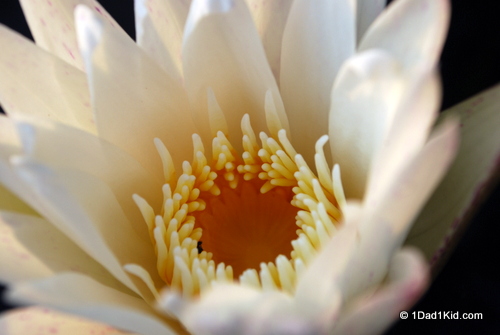 I could probably spend days writing up all the stories of generosity and kindness that we’ve experienced so far.

Sure, there are some stinkers out there, but by and large they are the minority. By a wide margin.

What are examples of some of the beauty in the world you’ve seen?