There is a Caribbean island not far from Mexico or the United States that is often under the travel radar and is illegal for Americans to visit without a special license. Yes, we’re talking about Cuba.  This post is the first in a series about Cuba, so I hope you continue reading.  I need to begin with a short disclaimer, though: By writing this post I am not encouraging anyone, especially US citizens, to visit Cuba who is legally restricted from doing so.  Some of the information contained in this post is anecdotal and/or based on research. If you have legal questions regarding traveling to Cuba, they should be directed to the appropriate government agencies so that you can get accurate advice. 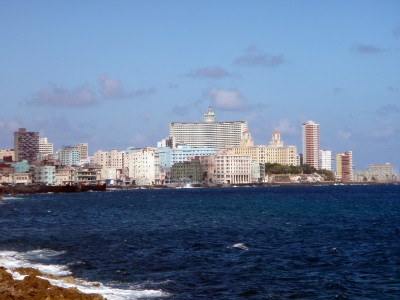 Getting there: Many countries offer flights to Cuba.  It is legal from the US if you have a special license. Popular choices for North Americans are via Canada and Mexico, particularly Cancun where is costs about $350 per person roundtrip.  If you fly out of Cancun, prepare to pay some money.  The airport exit tax is 250 MXN (~21 USD) per person.  If you go through a travel agency, often your ticket purchase will include the cost of the exit tax as well as the Cuban tourist card.  If it didn’t you can often purchase them at the ticket counter.  They are also available for sale next to the Cubana Airlines window across from the ticket counters.  The tourist card also costs 250 MXN per person.  In March 2010 Cuba enacted a law requiring foreigners visiting Cuba to have medical insurance that will cover care while in Cuba, otherwise you have to purchase it, which you can do in the Havana Airport (typically $2 per person per day); however, it would appear that this is policy is very loosely enforced. Be advised that no US insurance company will reimburse for healthcare costs related to travel to Cuba. It is also very difficult to purchase airfare to Cuba for Americans using a credit card since no US bank will authorize funds due to the embargo.  Reportedly some people have gotten around that by using travel sites such as Dohop.com which allow users to search international carriers and travel sites such as Spain-based TravelGenio.com. Some people who have used TravelGenio.com have reported getting an email asking them to further authorize the transaction by clicking on the enclosed link.  Apparently following that link is vital, easy, and will result in confirmed reservations. If flying Cubana Airlines, the reservation is listed as confirmed in their site immediately in spite of this process. Another popular Mexican carrier is AeroMexico. They charge foreigners an extra $22 per person.  Going through a travel agent typically results in a cost of $200-300 more than doing it yourself online via the sites mentioned above.

Due to the sensitive trade issues, Cuban officials do not stamp passports unless you specifically request it. Instead they will stamp the tourist card upon entry and, like Mexico, they keep the tourist card as evidence of your departure from the country.  If your visit is licensed, feel free to request the passport stamp; however, you are probably better off not doing so since you might need to provide additional documentation in the future to prove your visit had been authorized.

Entering Cuba is pretty straight-forward and relatively easy, especially if you are a citizen of a North American country. Finding English speakers is a bit challenging at times, even in the airport, but you can still make do.  You will be photographed both on entry and exit.

Money: Immediately outside the terminal you will find plenty of exchange booths. It is unwise to bring American dollars or coins regardless of what monetary system they belong to. No exchange or bank will convert coinage to CUC, so bring only bills of whatever denomination you plan on converting.  American dollars are taxed when converting to the Cuban convertible peso (CUC, pronounced like “kook”) so a person will only get 87 cents per 1 dollar (100 USD = 87 CUC).   There are 2 types of money used in Cuba.  The CUC is king and is relatively the same as 1 USD which makes things easy. However, the biggest bang for your buck is to buy using the moneda nacional, or Cuban peso.  Unfortunately, there aren’t a lot of places outside of the peso shops (more on these later) where a foreign tourist can do that.  It is generally recommended to not change money into the peso as you can pay peso shops with CUC and get the peso in change. The strongest and most widely used foreign currency in Cuba appears to be the Euro. However, it is reportedly easy to exchange the Mexican peso for CUC in Cuba, and the exchange rate is relatively the same as converting USD to the Mexican peso.  As you can see in the picture below, the CUC and the CUP are VERY similar and easy to get confused if you’re carrying both denominations. Stick with the CUC. 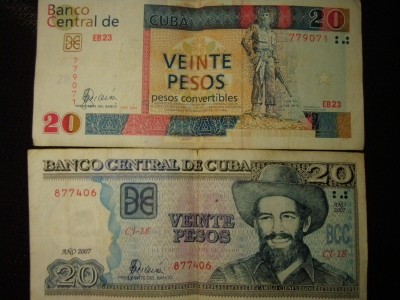 Also be advised that many people from many different countries have had issues getting ATM cards and credit cards to work in Cuba, so if you’re going you really should bring all the money you’ll need.  You can use traveler’s checks as well, but they usually have to be cashed in banks, and going to a Cuban bank can be an adventure all on its own (plan for at least 1-1/2 hours during “nonbusy” times).  Larger state-owned restaurants, hotels, and similar places will accept your traveler’s check.  It is best to ask beforehand, however, before sitting down and placing your order.

Next post will take on lodging, cost of food and transportation within Cuba, and Internet-related issues. If you have specific questions that haven’t been answered by any of the posts, please feel free to use our contact form to email me or leave a comment here, and I’ll try to answer them for you or direct you to a source that seems reliable.